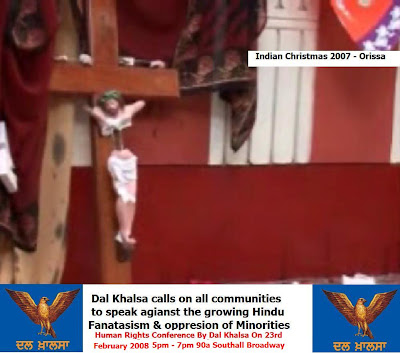 Dal Khalsa on the behalf of Sikh community sends it condolences to the Indian Christian community.Hundreds churches were burned and ransacked in eastern India over Christmas as RSS Hindu terrorists attacked members of the Christian minority.Days of celebration were turned into days of bloody carnage.

9 people were slaughtered,seven girls were kidnapped and are still missing,800 houses were burnt,Christian shops were ransacked and looted,the killers did not even leave charity money and ransacked the Church donation boxes.This was done with direct govt support.Only after the attacks did the media find out,due to the blackout imposed like in 1984, and Gujarat 2002.

It is regretful to say that Hindu community as a whole in parts been hijacked by fanatic terrorists in India.These fanatics only have one agenda of creating a pure Hindu race which are similar to Hitler and Nazi party ideals. These ideals are against humanity,we must put a united stand against this fanaticism. As the Sikh community we condemn these acts,These acts can only cerate tension between communities.

The main preaching point which the Hindu Terrorist linked RSS (Rashtriya Swanyamsevak Sangh)have put through that there is only one true ideology in this world,and that is Hindutva and that humanity only has one religion and one culture and that is Hinduism.To forward and to achieve this aim,we must assimilate the society in to Hindutva .

It sees Christianity as merely a branch of Hinduism,it refers to Christians as a part of the Hindu faith, through the alteration of historical books,which are taught in state schools across India as a compulsory curriculum ,its says that jesus was an incarnation of Hindu gods.He was merely there to give direction to society and the west and their anti Hindu elements have taken over jesus and have used him to propagate against Hinduism and that 90% of so called Christianity all over the world is merely a manipulation to be a Christian in India is to be a Hindu.
These ideas have become main stream in the indian polatics. These ideas find favour with polotions of all parties in india,the main being the BJP,the BJP is so heavily influenced by the RSS that it is refered to as the political wing of the RSS.we must stop this fanaticism


It is clear to see the state authorities of failing to intervene quickly enough, drawing comparison with the anti-Muslim in Gujarat in 2002, which left more than 10,000 dead and were state-sponsored according to human rights groups.

"I feel the government has allowed them to continue this sort of thing somehow, because I am afraid they are repeating what happened in Gujarat in the last two-three years," Raphael Cheenath, the Archbishop of Bhubaneswar, the state capital, told local television.

As the recent Gujarat elections show the RSS is gaining more and more power through backing various political parties with communal agendas.
http://play.rbn.com/?url=demnow/demnow/demand/2007/dec/video/dnB20071205a.rm&proto=rtsp&start=30:08

More Videos Of The RSS ,Bajrang Dal and other Hinduvta Terrorists admitting Genocide on Video