The Brexit Effect : Donald Trump vs The Establishment

**Congratulations to Donald Trump President Elect** Donald J. Trump has been elected to become the next President of the United States of America.Crooked Hillary lost in what was a revolt from the US working classes of all races,colours & faiths in a repeat of Brexit here in the UK this was a clear vote against the status quo & the elite establishment.Hillary was the worst candidate the Democrats could have put up a war monger who wanted to pursue nuclear war with Russia,the woman who destroyed Libya an agent of the George Soros,the Saudis the globalists and the banks.Not only this her emails scandal,criminal activity in regards to the Clinton Foundation links to paedophiles cemented her defeat,had the Democrats put in Bernie Sanders & had Clinton not stolen the nomination from him maybe he would be President Elect.The mainstream media & the pollsters were also exposed throughout the night as liers making out Hillary would win a landslide but as we know now she was defeated heavily across the states alongside her party.The alternative media in all it's forms and outlets needs to be applauded for giving an accurate picture of what was going on throughout the night,they have proven if you want the truth & not false stories of polls avoid the mainstream media and establishment elite outlets.In a sign of hope Russian President Vladamir Putin has congratulated Donald Trump via telegram the threat of a World War and that too nuclear now has gone away,had Hillary come in it would have led to that 100%.We predicted Donald Trump would win and congratulate Donald Trump on his election as the next President of the US a job which comes with heavy responsibilities being the leader of the free world we hope the US now unites as one nation under God to make the lives of hardworking American citizens better.The establishment & the elite are at this point facing a revolt across the world as the opposite to what they want to happen is now occuring worldwide,all starting with the revolution of the Brexit vote to leave the EU. 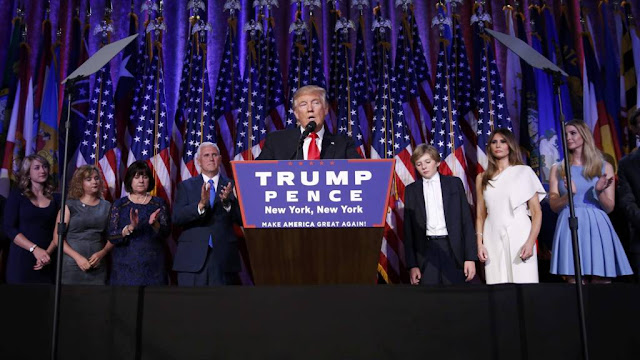 We agree with Jeremy '' Trump’s election is an unmistakable rejection of a political establishment and an economic system that simply isn’t working for most people. It is one that has delivered escalating inequality and stagnating or falling living standards for the majority, both in the US and Britain
This is a rejection of a failed economic consensus and a governing elite that has been seen not to have listened. And the public anger that has propelled Donald Trump to office has been reflected in political upheavals across the world. ''