WE APPEAL DIRECTLY TO ALL UK SIKHS TO SIGN SHARE THIS VIDEO TO EVERYONE ON THEIR FRIENDS LIST & TO POST IT ON THEIR WALLS & PAGES.WE ASK ALL TO PLEASE SIGN THE PETITION http://epetitions.direct.gov.uk/petitions/26448 TO ASK THE UK GOVT TO PRESSURE THE INDIAN GOVT TO GIVE BACK THE LAND OF GURDWARA GYAN GODHRI SAHIB DESTROYED BY HINDU MOBS IN 1984,THEY HAVE ALREADY BUILT SHOPS & TOILETS ON THE SITE & NOW PLAN TO BUILD MANDIRS.WE CANNOT LET THE LEGACY OF SRI GURU NANAK DEV JI BE WIPED OUT ACT NOW! SIGN HERE http://epetitions.direct.gov.uk/petitions/26448 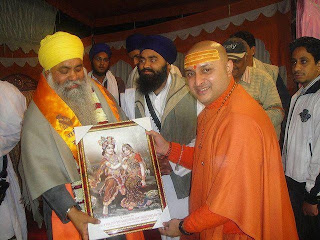 TRAITOR SANT SAMAJI BABA FOLLOWERS WITH THEIR FELLOW RSS HINDUTVA COUNTERPARTS**WARNING** IN THE UK IN PLACES SUCH AS SOUTHALL,GRAVESEND,BIRMINGHAM & OTHER SIKH AREAS SO CALLED SIKH YOUTH FROM INDIA HAVE BEEN SENT BY INDIAN INTELLIGENCE AGENCIES TO STIR UP TROUBLE & DIVIDE THE SANGAT ON VARIOUS ISSUES IN THE PANTH,DO NOT BE FOOLED BY THE BANA,DHUMMALAS OR KIRPANS THEY ARE OUT FOR ONE THING DIVIDE & RULE THEN THEY WILL VANISH AS HAS HAPPENED IN SOUTHALL ON SEVERAL OCCASIONS - TRAITORS AND AGENTS IN OUR MIDST,OPPOSE THEM BUT REMAIN UNITED AS ONE PANTH UNDER THE KESRI NISHAN SAHIB 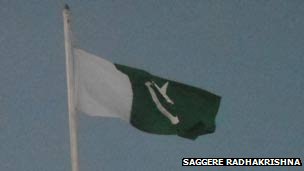 Six members of a right-wing Hindu group have been arrested in India's southern Karnataka state for raising Pakistan's national flag on a government building.

The flag was raised in Sindgi, near Bijapur, on 1 January, leading to angry protests by Hindu organisations and the stoning of a Muslim prayer hall.

Police say Sri Rama Sena was trying to create "communal disharmony" in an area with a sizeable Muslim presence.

Sri Rama Sena is a fringe group that claimed responsibility for attacking women outside a pub in the coastal district of Mangalore in 2009, saying that allowing females in pubs was against Indian culture.

Inspector general of police Charan Reddy told the BBC the situation in Sindgi was "now peaceful".

"It seems they were out to create communal disharmony," he said.

Hindu organisations had called for strikes in a number of towns around Bijapur to protest against the flag-raising.

But Mr Reddy said police investigations had led them to members of the Sri Rama Sena, a group founded by Pramod Muthalik after it broke away from the Bajrang Dal, an affiliate of the long-standing Hindu nationalist organisation, the Rashtriya Swayamsevak Sangh (RSS).

Mr Muthalik is the leading suspect in the attack on the women in Mangalore.

Former chief minister and Janata Dal Secular party leader HD Kumaraswamy said of the flag-raising: "It is such a shame. I blame the RSS and the Bharatiya Janata Party (BJP) for the incident. They want to divide society on religious lines."

Bijapur is close to Hyderabad in neighbouring Andhra Pradesh and is a historic town with a sizeable Muslim population.

Police arrested Sri Rama Sena members for the desecration of a mosque in Mysore a few years ago.

The carcass of a pig was thrown near the prayer hall, an act that triggered major riots between Hindus and Muslims.

Karnataka was also rocked by a series of attacks on churches by right-wing groups in 2008, immediately after the BJP came to power. 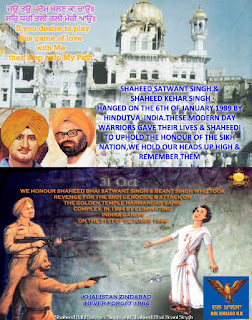 ON THIS DAY JANUARY 6TH IN 1989 SHAHEED SATWANT SINGH & SHAHEED KEHAR SINGH GAVE THEIR LIVES FOR THE SIKH NATION.BOTH WERE HANGED BY THE INDIAN GOVERNMENT FOR THEIR HEROIC ACT OF ELIMINATING INDIRA GANDHI WHO SHAHEED SATWANT SINGH & SHAHEED BEANT SINGH SHOT DEAD ON 31ST OCTOBER 1984 FOR HER GENOCIDAL CRIMES AGAINST THE SIKH NATION.EVEN THOUGH SHAHEED KEHAR SINGH PLAYED NO PART & WAS INNOCENT HE WAS STILL SENT TO BE HANGED,HE HAPPILY ACCEPTED DEATH INSTEAD OF BEGGING FOR MERCY FROM THE HINDUTVA ESTABLISHMENT.THEIR SACRIFICES RESTORED THE HONOUR OF THE SIKH NATION....WE REMEMBER THESE SAINT SOLDIERS WHO WILL FOREVER INSPIRE US,THEY DIED FOR US FOR THE FREEDOM OF PANJAB KHALISTAN FOR THE DESTROYED SRI AKAL TAKHT SAHIB FOR THE SHAHEEDS ..NOW THEY JOIN THOSE VERY SHAHEEDS AT THE FEET OF SRI GURU GOBIND SINGH JI MAHARAJH

SARDAR MANMOHAN SINGH KHALSA VICE PRESIDENT DAL KHALSA INT'L STATEMENT ON JATHEDAR IQBALS STUPID CLAIMS THAT SRI GURU GOBIND SINGH JI WILL BE BACK IN 2016,SARABJIT SINGH DHUNDA & THE NEW PETITION SUBMITTED BY DAL KHALSA UK APPROVED BY THE BRITISH GOVT TO PRESSURE THE INDIAN GOVT TO GIVE THE LAND OF GURDWARA GYAN GODHRI BACK TO THE SIKHS WHICH WAS DESTROYED IN 1984 EVERYONE SIGN THE PETITION http://epetitions.direct.gov.uk/petitions/26448

We request that the Government pressure the Indian Government to provide justice for Gyan Godhri Gurdwara Sahib & let the Sikh Community restore it to its former glory,by handing back the now occupied land.The ancient Gurdwara which relates to the 1st Sikh Guru in Haridwar was destroyed by Hindu Mobs in 1984 during the anti Sikh Pogroms & Genocide.Since then members of Extreme Hindu Organisations such as the RSS have been occupying the land & have built several illegal structures on the holy shrine & plan to build more.Sikhs have carried out protests in Panjab & Delhi to highlight the issue but to no avail.We as Sikhs in the UK urge our Government to take this issue up with their Indian Counterparts,as it is an issue of great importance to the UK Sikh Community.

THE KILLERS OF STEPHEN LAWRENCE HAVE BEEN SENTENCED - DOBSON A MINIMUM OF 15 YRS & 2 MNTHS,NORRIS A MINIMUM OF 14 YRS & 3 MNTHS AT COURT NO 16 AT THE OLD BAILEY LONDON NEXT DOOR TO GAGAN'S MURDER TRAIL COURT AT 15.WE PRAY THAT ALL INVOLVED IN THE MURDER OF STEPHEN LAWRENCE PAY FOR THEIR CRIMES,AS SOME ARE STILL ROAMING FREE.SOME JUSTICE NEARLY 19 YRS LATER..,A SHAME IT HAS TAKEN SO LONG & THEY WERE SENTENCED AS JUVENILES DUE TO TECHNICALITIES..LETS HOPE THE OTHER KILLERS WHO ARE FREE ARE ALSO BOUGHT TO JUSTICE.WE ALSO ASK ALL TO DO ARDASS/PRAY FOR THE JUSTICE OF OUR DEAR BROTHER GAGAN WHO'S TRAIL IS GOING ON AT COURT NO 15 NEXT DOOR TO WHERE STEPHEN'S TRAIL WAS....WE NEED ALL YOUR PRAYERS & SUPPORT

Sikhs Are Slaves In India

Sikhs are Slaves in Hindutva India,brilliant views of Bhai Sahib of USMedia Canada 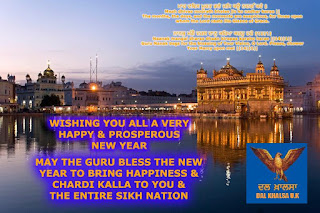 WE WISH ALL OF YOU A VERY HAPPY NEW YEAR & HOPE 2012 IS BETTER THAN 2011 NOT JUST FOR EACH INDIVIDUAL BUT FOR THE ENTIRE SIKH NATION & INDEED THE WORLD.THIS HAS BEEN A VERY TURBULENT & BAD YEAR FOR THE SIKH NATION ONE WITH WHERE A LOT OF TRAGEDY HAS OCCURRED,LETS ASK WAHEGURU TO BLESS US ALL WITH UNITY SO WE CAN ALL UNITE UNDER THE KESRI NISHAN SAHIB UNDER THE LEADERSHIP OF SRI GURU GRANTH SAHIB JI MAHARAJ TO TAKE THE SIKH NATION FORWARD
KHALISTAN ZINDABAD