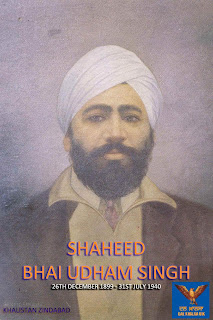 Shaheed Bhai Udham Singh - 70 Years Since He Was Hanged In London On 31st July 1940,An Icon Of Freedom Who Is Relevant More Than Ever To Our Struggle For Freedom- Khalistan Zindabad

All icons of Freedom for the Sikh Nation,this year was special as the main theme was to mark the 300 year anniversary of Khalsa Raaj established by Shaheed Baba Banda Singh Bahadur.

Over a thousand Sikh youths along with players from other communities attended The Goals Soccer Centre located at Springfield Road Hayes.Over 50 teams competed in knock out stages to lift the Sikh Youth Football Tournament 2010 cup,the winning team - 'To the moon & back' were presented the trophy by Dal Khalsa International Vice President Sardar Manmohan Singh Ji Khalsa.In his opening remarks at the start of the tournament Sardar Manmohan Singh praised all those in attendance and said that each and every youth should be proud in coming together to form community harmony and links through the tournament & should stand united to strengthen the Sikh Nation.

He then went on to explain the significance of the theme of this years tournament being the 300 year anniversary since Shaheed Baba Banda Singh Ji Bahadur established the 1st Khalsa Raaj Sikh Rule.He also mentioned how the struggle for Sikh Sovereignty and fight for the Freedom of the Sikh Nation in the form of Khalistan still continues today and mentioned Dal Khalsa Founder member Bhai Gajinder Singh Ji (In Exile) and his sacrifice.

Sardar Manmohan Singh then explained how the Sikh Nation is still fighting for it's freedom after the 1984 Sikh Genocide by India & mentioned how the Hindutva Govt. destroyed the Akal Takht with tanks while modern day Sikh Warriors such as Shaheed Sant Jarnail Singh Ji Khalsa Bhindranwale fought to the death to protect Sikhism's holiest shrine.The Tournament he said was dedicated to those mentioned above and icons such as Shaheed Bhai Udham Singh and Shaheed Bhagat Singh who all fought for freedom from tyranny and injustice.The tournament being held on the 31st of July 2010 co incided with the Shaheedi of Shaheed Bhai Udham Singh,songs dedicated to him and the Shaheeds of 1984 were played throughout the tournament while matches were taking place,Sardar Manmohan Singh finished of with Jakareh of Khalistan Zindabad.

Langar & refreshments were provided for free by sevaadars throughout the match alongside free posters literature and t shirts regarding the Sikh Movement were handed out.Dal Khalsa would like to thank all those involved in making this tournament a success and most of all the players of all the teams without which there would be no tournament,we hope that this was an educational as well as a fun experience for all who attended.

On a separate note with the release of the so called blacklist of Sikh by India in major Indian Papers,Sardar Manmohan Singh mentioned that he was proud to be on the so called blacklist of India,as speaking out against injustice and for Sikh Freedom is part of being a Sikh.Those so called Sikh leaders who want to be removed from the blacklist are cowards and sellouts who have spat on the sacrifice of the Shaheeds and our Gurus.If our Gurus or Shaheeds never asked to be pardoned for speaking the truth and fighting for freedom from tyrants which have and are destroying the Sikh Nation then why should we? said Sardar Manmohan Singh.There is at this point mounting speculation that so called Sikh leaders in the UK and other countries outside the UK are planning to give up their demands for Khalistan,Sikh Freedom in return for entry into India.Dal Khalsa UK would like to remind these so called leaders of the history of our glorious Shaheeds in whose footsteps we should follow instead of asking those who oppress us for removal from a 'blacklist'.Sikh Youths alongside Dal Khalsa UK are fully aware of India's games and of those within the community who want to destabilise the Sikh Nation and its movement for freedom.