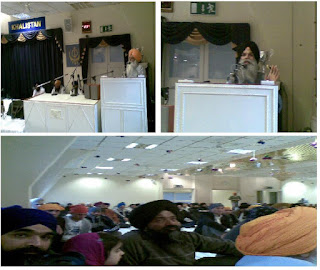 March 16 2008,Singh Sabha Gurudawar Slough.Sikh community call for the ban on the fascist extremist terrorists of the RSS (Rashtirya Swayamsevak Sangh) in uk.Sikh leaders made it very plain and simple that their is no place for the fascist ideals of the rss in the Sikh community anywhere.RSS is a Hindu terrorist group. Its believes that humanity has only one faith and one culture that is Hinduism. It has a very simple slogan Hindi, Hindu Hindustan.

The RSS was founded in 1925 by Dr.K.B. Hedgewar. The RSS is active throughout India and as well as abroad.It became a mass organisation under the leadership of M.S Golwalker m.s Golwalker is seen as the spiritual master of this organisation and is referred to as God ,he is worshipped and seen as a demi god.Golwalker was a sympathiser of Hitler and said that Hindus can learn a lesson from Hitller and his pure race ideology.In support of this golwalker said violence should be used a a surgeons knife to kill society,he goes on to say that the ones who do not accept Hindutva as the main religion and culture of India,are merely a disease which need treatment.To kill them is merely like using medicine to cure a disease.Now we are talking about a person,who thinks that humans with different beliefs should be wiped out,he takes this directly from Hitler.He goes on to state the main idea of the RSS,that only Hindus should reside within India.When scholars have gon eon to research golwalkers work ,they have said he is not preaching Hinduism,but it is Hindutva. 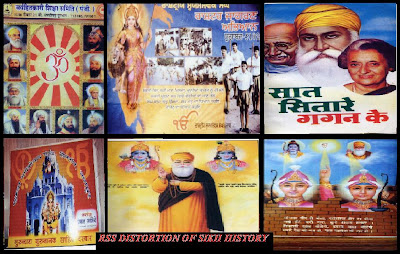 The RSS sees Sikhism as the biggest threat to its ideology and Hindutva . Guru Nanak condemned the caste system and the unfair treatment of lower castes, and discrimination to women,he was born into a family which is regarded as a slave caste, within the RSS ideology. It is like a revolution from within to them and they have tried their utmost to destroy and to finish Sikhism off by all means necessary socially ,politically and economically .They claim all Sikh Gurus were Hindus,they have tried to alter all Sikh scriptures to match their views of Hindutva.The British Govt recognises the Sikh faith as a distinct religion and a separate race,in opposition to this the RSS continue to maintain that Sikhs are Hindus. The human rights abuses it has committed in the last 60 years are nothing short of a holocaust within http://petitions.pm.gov.uk/bantherss/