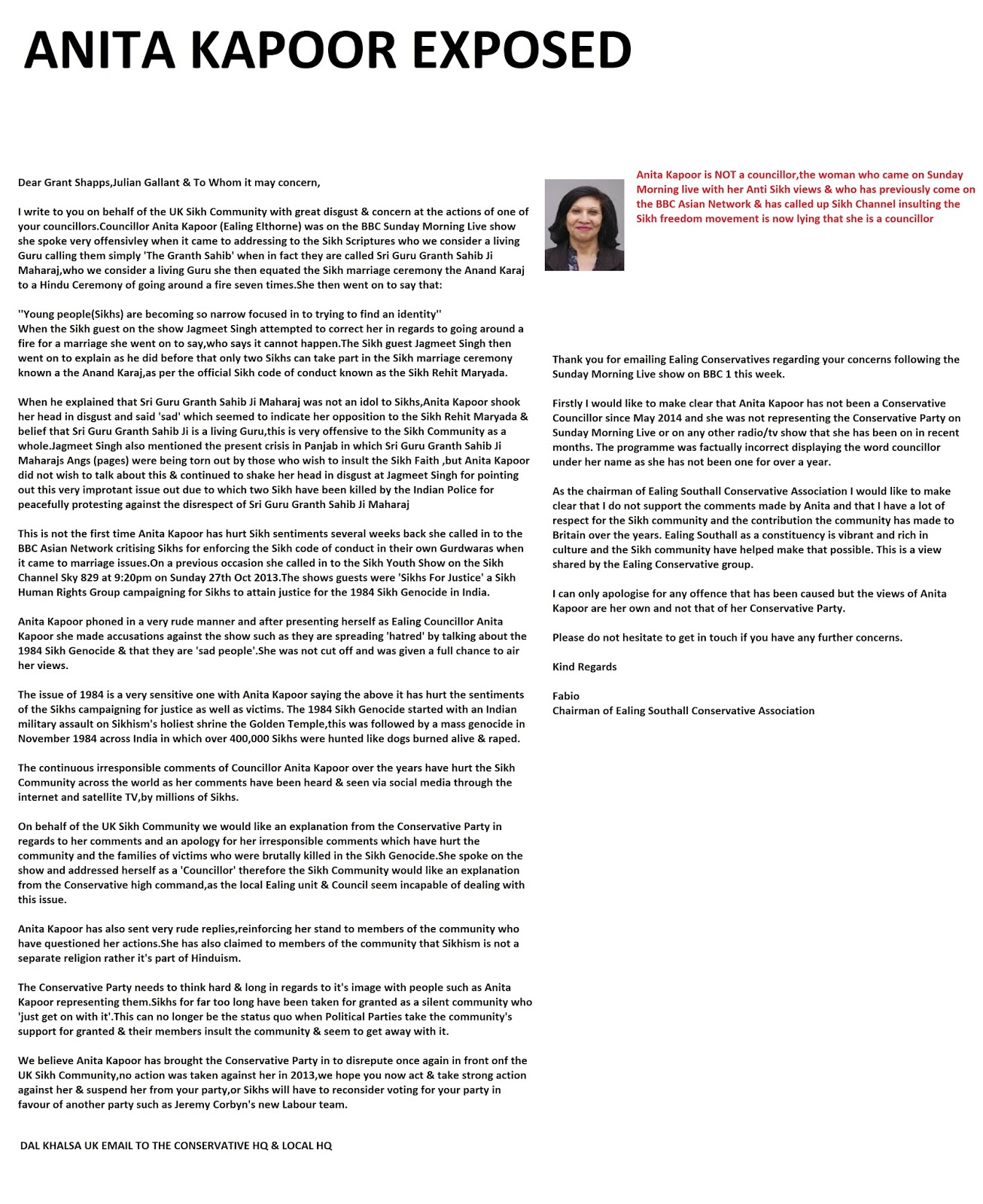 
Dear Grant Shapps,Julian Gallant & To Whom it may concern,

I write to you on behalf of the UK Sikh Community with great disgust & concern at the actions of one of your councillors.Councillor Anita Kapoor (Ealing Elthorne) was on the BBC Sunday Morning Live show she spoke very offensivley when it came to addressing to the Sikh Scriptures who we consider a living Guru calling them simply 'The Granth Sahib' when in fact they are called Sri Guru Granth Sahib Ji Maharaj,who we consider a living Guru she then equated the Sikh marriage ceremony the Anand Karaj to a Hindu Ceremony of going around a fire seven times.She then went on to say that:

''Young people(Sikhs) are becoming so narrow focused in to trying to find an identity''
When the Sikh guest on the show Jagmeet Singh attempted to correct her in regards to going around a fire for a marriage she went on to say,who says it cannot happen.The Sikh guest Jagmeet Singh then went on to explain as he did before that only two Sikhs can take part in the Sikh marriage ceremony known a the Anand Karaj,as per the official Sikh code of conduct known as the Sikh Rehit Maryada.

This is not the first time Anita Kapoor has hurt Sikh sentiments several weeks back she called in to the BBC Asian Network critising Sikhs for enforcing the Sikh code of conduct in their own Gurdwaras when it came to marriage issues.On a previous occasion she called in to the Sikh Youth Show on the Sikh Channel Sky 829 at 9:20pm on Sunday 27th Oct 2013.The shows guests were 'Sikhs For Justice' a Sikh Human Rights Group campaigning for Sikhs to attain justice for the 1984 Sikh Genocide in India.

Anita Kapoor phoned in a very rude manner and after presenting herself as Ealing Councillor Anita Kapoor she made accusations against the show such as they are spreading 'hatred' by talking about the 1984 Sikh Genocide & that they are 'sad people'.She was not cut off and was given a full chance to air her views.

The issue of 1984 is a very sensitive one with Anita Kapoor saying the above it has hurt the sentiments of the Sikhs campaigning for justice as well as victims. The 1984 Sikh Genocide started with an Indian military assault on Sikhism's holiest shrine the Golden Temple,this was followed by a mass genocide in November 1984 across India in which over 400,000 Sikhs were hunted like dogs burned alive & raped.

The continuous irresponsible comments of Councillor Anita Kapoor over the years have hurt the Sikh Community across the world as her comments have been heard & seen via social media through the internet and satellite TV,by millions of Sikhs.

On behalf of the UK Sikh Community we would like an explanation from the Conservative Party in regards to her comments and an apology for her irresponsible comments which have hurt the community and the families of victims who were brutally killed in the Sikh Genocide.She spoke on the show and addressed herself as a 'Councillor' therefore the Sikh Community would like an explanation from the Conservative high command,as the local Ealing unit & Council seem incapable of dealing with this issue.

The Conservative Party needs to think hard & long in regards to it's image with people such as Anita Kapoor representing them.Sikhs for far too long have been taken for granted as a silent community who 'just get on with it'.This can no longer be the status quo when Political Parties take the community's support for granted & their members insult the community & seem to get away with it.

We believe Anita Kapoor has brought the Conservative Party in to disrepute once again in front onf the UK Sikh Community,no action was taken against her in 2013,we hope you now act & take strong action against her & suspend her from your party,or Sikhs will have to reconsider voting for your party in favour of another party such as Jeremy Corbyn's new Labour team.

I hope you will address this issue with urgency