The Indian Hindutva State through a Delhi Court has issued non-bailable warrants against 5 founding Members of Dal Khalsa International in relation to the Hijacking of the Indian Airlines plane in 1981.The plane was hijacked by Bhai Gajinder Singh, Bhai Tejender Pal Singh, Bhai Satnam Singh,  Bhai Karan Singh  and Bhai Jasbir Singh in protest against the arrest of Mahan Shaheed Sant Jarnail Singh Ji Khalsa Bhindranwale alongside the gross violation of Sikh Human Rights,Burning of Saroops Of Sri Guru Granth Sahib Ji & Continuous attacks on the Sikh Faith by the Indian Hindutva State then led by the Tyrannical Indira Gandhi.


No passengers were harmed on the flight,passengers went on television to praise how    friendly the 5 Singhs were when they took the plane to Pakistan.All 5 of these Members have served more than enough time in Jails in Pakistan & India,there is no reason for the Hindutva Indian Judicial System to issue Warrants against these 5 Sikhs.
The only thing we can see with this unusual action is that the Hindutva State need something to focus their attention on with the hanging of Jathedar Bhai Balwant Singh Ji Rajoana being stayed for the time being & the cases of Bhai Jagtar Singh Hawara being finished off.
Thus they have now issued these warrants to harass these members of Dal Khalsa International who spoke up for Human Rights then and still speak up now.This is being done in order to silence the voices of Freedom it makes no sense that 30 years later after sentences have been served they now issue new arrest warrants against the Dal Khalsa members.We condemn this action by the Hindutva Indian State in the strongest terms,it's at time like this when India's True so called Democracy is exposed.

The head of the anti Sikh RSS Hindutva Terrorist group met with the head of the terrorist Radhaswami Cult,no information has been given out as to why this meeting was held and why the head of the RSS went all the way to the Dera in Beas Jalandhar to meet him.

Dal Khalsa UK would like to state on this occasion that the only reason the RSS head has gone to meet with the Dera head is to plan an Anti Sikh plan to finish of Sikhs & Sikhism.The puppet Jathedars of Badal/RSS have already accepted the Radhaswamis and forgiven them for destroying several Gurdwaras and for taking over the land of Farmers.These actions by the Jathedars and false Sikh leaders are against Sikh Maryada as well as Sikh ethics.

This meeting comes hot on the heels of RSS Hindutva threats to kill Sikhs & send them to Pakistan all of you by now may have seen several terrorist threats by Hindu RSS terrorists to Sikhs on youtube.

The core plan is to merge Sikhism with Hinduism,the RSS for many years has been attempting to do this via changing Sikh history modifying it to fit within Hindu Traditions and Brahmanical Practices.Not only this they want to change the very aspect of the Sovreign Sikh Nation or Khalsa Panth as a separate entity.

While the Guru Sahiban's armed Sikhs and ordered them to be Shasthardhari and Tyar Bar Tyar these cultists Hindutva deras like the Radhaswamis pick and choose aspects of Sikhi while discarding the Saint Soldier aspect.The Radhaswamis in particular have attempted to mould a defenceless version of Sikhi which fits in to Hindu tradition where they claim they do not believe in keeping the Kirpan and being Shasthardhari and claim they only believe in the first five Guru Sahiban's as they were 'peaceful' in their words.

Only the uneducated will fall for this as there is no difference in any of our Guru Sahiban's from Sri Guru Nanak Dev Ji - Sri Guru Gobind Singh Ji - Sri Guru Granth Sahib Ji.The ethos the light and very make up of Gurbani is one and the same.

While the Radhaswamis and other cults go about attempting to change Sikhism to merge it in to Hinduism the Hindu Terrorists now openly threaten Sikhs who stand up for Sikhism with violence and death alongside being sent to Pakistan.

We warn Sikhs again dangerous times are ahead and all Sikhs in Panjab should be ready for any situation and be armed as Guru Sahib has ordered us.If Hindu Terrorists of the RSS Shiv Sena can threaten us with Guns in Youtube videos Sikhs should take every precaution to be armed for self defence if any trouble should occur.

The two way attack physical as well as ideological is now well under way against the Sikh Nation & Faith. Mohan Bhagwat and Gurinder Dhillon
“Rashtriya Swayam Sewak Sangh (RSS) chief Mohan Bhagwat specially came to Punjab to have a meeting with Baba Gurinder Singh Dhillon, the head of Radha Soami sect at the sect headquarters located at Beas.
Though nobody came forward to confirm the same but probably it was the first meeting of any RSS Chief with any of the heads of Dera Radha Soami.
Beas is a township located between Jalandhar and Amritsar at National Highway No.1 in Punjab.
The meeting took place on Thursday morning. Bhagwat and Baba Gurinder Singh Dhillon reportedly met for almost an hour. No details of the meeting were made available to media by either RSS or Dera Beas. It could not be known what was the agenda of the meeting and what transpired between the two.
Bhagwat reached Jalandhar on Wednesday (October 17, 2102) evening for presumably the already fixed meeting on Thursday.
Sources said his Jalandhar visit was just a ‘stopover’ as he had come to have a meeting with Radha Soami Chief.
The RSS Chief arrived at Jalandhar by Shatabdi and went straight to the residence of local RSS leader Kuldip Bhagat’s residence in Deen Dayal Upadhaya Nagar in the city.
The district administration and the Jalandhar Commissionerate Police were aware of the RSS Chief’s visit and elaborate security arrangements were made.
Local BJP leaders were taken unawares as the news of RSS Chief’s visit to the city spread but most of them were not allowed to meet Bhagwat. Only a few and chosen ones were allowed.
Bhagwat sprung a surprise on Thursday (October 18, 2012) morning when he went to Sain Dass School Grounds in Gopal Nagar area to attend RSS ‘shakha’ and interact with RSS activists. The RSS holds its ‘shakha’ on these grounds only.
Sources told that Bhagwat interacted with RSS workers, the Sangh way, i.e. ‘Baudhik’ and ‘Samanvaya’. He remained there at the ‘Shakha’ till 8.00 am and had his breakfast at Kuldip Bhagat’s residence.
He then proceeded to Dera Beas for his meeting with Baba Gurinder Singh Dhillon and entered the Dera at about 9.35 am. Sources said, his meeting with Dera Chief lasted for a little less than an hour. He then left the Dera. It could not be known where he went thereafter.
Baba Gurinder Singh Dhillon and Dera Beas known for keeping away from media glare had been in the news recently for two reasons.
The Dera first came into an eye of the storm when it was accused of taking over and then dismantling a Gurdwara at a village Waraich in the promixity of the Dera, a charge which was vehemently denied by the Dera. Later SGPC and Akal Takht had given ‘clean chit’ to the Dera on the issue even as some Sikh groups protesting against the dismantling of the Gurdwara maintained that they were not satisfied with the ‘clean chit’.
The Dera and especially Baba Gurinder Singh Dhillon, himself, attracted media glare when he visited Sri Darbar Sahib at Amritsar and paid his obeisance there. The Dera head on 26th of September visited Darbar Sahib, sans his security. He became the first head of his sect to have visited Golden Temple.”

THE LATEST VIDEO FROM OUR PARTNER UNITED SIKH MEDIA CANADA

A MUST WATCH MUST SHARE VIDEO FOR YOU ALL WHICH EXPLAINS THE CONCEPT OF DHARAM YUDH IN SIKHI....A VIDEO WHICH WILL AWAKEN YOUR VERY CONSCIENCE

THE HINDUTVA STATE AT WAR WITH SIKHS & OTHERS

THE LATEST HINDU TERROR THREAT TO KILL SIKHS..PLEASE DOWNLOAD ALL THEIR VIDEOS AS EVIDENCE OF THEIR TERRORIST ACTIVITIES & THREATS AGAINST THE SIKH NATION 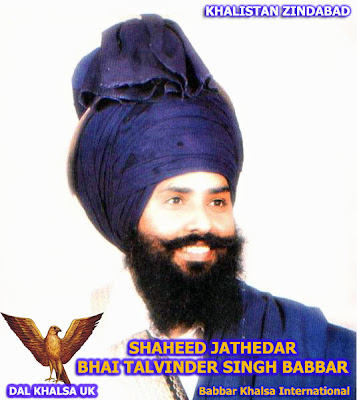 WE BOW OUR HEADS IN HOUNOUR OF SHAHEED JATHEDAR BHAI TALVINDER SINGH JI BABBAR - BABBAR KHALSA INTERNATIONAL WHO ATTAINED SHAHEEDI ON THIS DAY IN 1992...A TRUE LION WHO FOUGHT IN DEFENCE OF THE SIKH NATION & KHALISTAN TILL HIS VERY LAST BREATH

BREAKING NEWS - YET ANOTHER HINDU TERROR THREAT TO SIKHS IN PANJAB ,THE HINDUTVA GOVT WILL NEVER TAKE ACTION AGAINST THESE PEOPLE WHO OPENLY THREATEN TO KILL SIKHS

OUR PARTNER UNITED SIKH MEDIA CANADA'S RESPONSE TO THE HINDU TERRORIST THREATS TO THE SIKH NATION TO WIPE US OUT IN PANJAB...