A Call For International Action 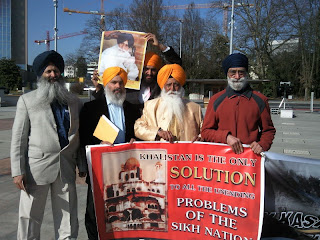 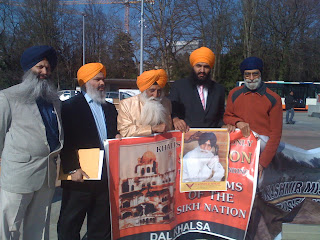 On the 16th of March 2009 a united front of all Panthic Jathebandia briefed the United Nations in Geneva on the issues affecting the Sikh nation within the state of India and Indian Occupied Panjab Khalistan.The meeting was organised by Prithpal Singh Khalsa of Dal Khalsa International Human Rights Wing and was hosted by Dr Charles Graves of Interfaith International.Various Sikh leaders made speeches on how the Sikhs have been treated since 1947 within Hindu India,how their political and human rights have been taken away from them and how a genocide of a whole generation of Sikhs has taken place since 1984.The upcomming 25th anniversary of the Sikh Genocide in 1984 and the State Sponsored Military terror attack on Sikhism's holiest Shrine The Golden Temple was highlighted in speeches along with handouts on the nationwide genocide in November 1984 across India.

A video was played showing how the hand of Hindutva and Hindu Terror is devastaing the minorities within India,and how Hindutva is getting stronger and stronger day by day.Recent news from the last few days shows that no minority is safe within India Varun Gandhis rants about ''cutting the hands of those who oppose Hindus'' shows the mindset of these fanatical leaders who are running this so called democracy.

Article 25 of the Indian Constitution was also touched upon in a speech ,the UN was told about how India and its Supreme courts define the Sikhs as Hindus along with Jains,and how they use this to their advantage to tell the international community that Sikhs, already as Hindus have freedom in India.
This then leads on to the bigger aim of those behind the scenes to that of Hindutva Hindi,Hindu,Hindustan,which sees the assimilation of minorties into the Hindutva fold of one language,one religion/race,and one nation of Hindustan - Hindutva.

A democracy is supposed to be power to the people,freedom and justice for the common man and citizens of the democracy, the Sikhs and other minorities in India do not enjoy these freedoms.Freedom for minorities and nations has been crushed by India and its Hindutva regimes which are just a political show on the outside but internally they are run by people who mirror the Nazi Party, some may even say that these people have gone further than the Nazis and are much more successful in doing so with all the genocides they have commited which have been unforseen to the World.The Western World is blind as a result of this succesful play of 'democracy' India shows to the International Community.The set up of India was explained as an artificial state made for the conveinience of the British Empire,the Sikhs' right to self determination was explained and how this right is crushed was described to all those who atteneded the briefing.The Sikhs declared their right to self determination at the Sarbat Khalsa Gathering in 1986 which was attended by over 500,000 Sikhs ,but as we know India using its military might and state sponsored terrorism devastated the Sikh Nation with a Genocide which words cannot describe.The Sikh Jathebandia called for a UN Sponsored Plebiscite in Indian Occupied Panjab Khalistan on the creation of a Sovreign State of Khalistan.


The recent appeal by the Sikh Nation to the UN regarding the use of WMD'S weapons of mass destruction in the Sikh Homeland was also followed up.The UN was briefed on how the Sikhs are not in a position to protect their homeland if India and Pakistan go to War.As Panjab lays in Indian Occupation it would be in the firing line from the Pakistani side if any war occurs.The Sikhs face the threat of annihilation in the case of any nuclear war between the two countries along with the Worlds 5th largest religion and its homeland.An appeal was made to the international community on behalf of Sikhs to prevent any war and loss to the Sikh nation as we are not a party to the the current crisis between India and Pakistan. 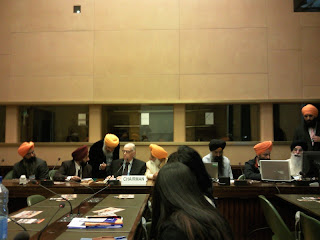 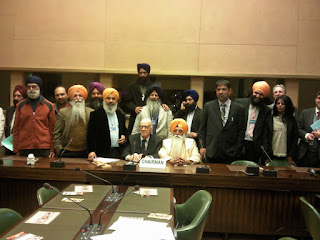 A Call For International Action

In light of these great challenges to Sikh Human Rights we call on the international community to act not only to punish those guilty of commiting the genocide of the last 25 years,but also to protect the Sikh Homeland and,ultimately,facilitate the setllement of the Indo-Sikh conflict by allowing the Sikhs to excercise their right to national self determination.In that regard,the following steps should be taken:

1:The setting up of internationl tribunals to investigate the Sikh Genocide commited by the Indian State;in June and November respectivley of this year it will be 25 years since the outrages of the attack on the Golden Temple and the massacres of Sikhs in Delhi.Those milestones should be marked by action rather than then dangerous expendiency of international silence.It is clear that India itself has neither the the appetite nor feels the need to itself address these matters and experience shows us that it will not do so.The UN has established criminal courts to deal with the genocide in Yugoslavia and in Sudan and there is every reason to now put India's criminals in the dock to deliver justice for those who have suffered the wholesale abuses of human rights.

2:International rejection of India's claim to a permenent seat on the UN Security Council.Unless and until India can comply with the UN's own basic human rights requirements,it cannot be right to support such a move and it may well prove to be the height of naivety.

3:Unless both those states agree to the terms the International Sikh Community has formally put to them on January 26th of this year,the UN should intervene to stop the targeting or use of the Sikh Homeland for the citing,transport,firing of weapons of mass destruction.The UN's human rights bodies should make it clear to the leaderships of those states that anyone breaching these conditions will have to account to an international court for crimes against humanity should a nuclear holocaust take place in the Sikh Homeland.

4:The Holding of a UN Sponsored plebiscite in the Sikh Homeland on the creation of a Sovreign Sikh state of Khalistan.The Indo-Sikh Conflict must be resolved and the process of self determination,by peaceful and democratic means,in accordance with international law,is the only mechanism that can do this.Such a plebiscite will allow the Sikhs to demonstrate to the World a democratic mandate for the freedom struggle and thus allow the UN to oversee the process of liberation as it did in East Timor.