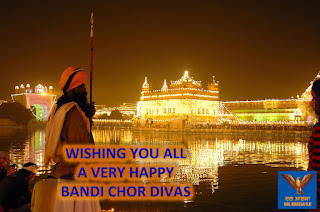 Dal Khalsa International along with all associates & sevadars as well as Bhai Gajinder Singh Ji,wish you all a very Happy Bandi Chor Divas 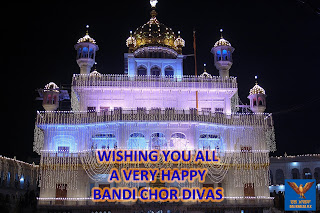 Dal Khalsa wishes all a very Happy Bandi Chor Divas the day when our
6th Guru,Guru Hargobind Sahib Ji was released from Jail along with 52
Princes,before being released Guru Ji said he will not leave unless the
52 princes leave with him.The Emperor then said however many of the
princes can hold on to your cloak can go free,so Guru Ji got a cloak
with 52 tasels hanging off,so each prince could hold on to it.

This lead to all 52 Princes being released along with
Guru Hargobind Sahib ji.

Guru Ji was jailed due to the conspiracy of Chandu Bhaman,who had earlier got the 5th Guru,Guru Arjan Dev Ji Sirtaaj Shaheedan Deh martyred.Chandu tried his best to get Guru Ji poisoned and killed while Guru Ji was jailed.In the end he failed & Jahangir had to ask for forgiveness from Guru Ji,Sai Mia Mir advised Jahangir that if he really wishes to rid himself of the sins he has commited he should release Guru Hargobind Sahib Ji and that was exactly what he did. 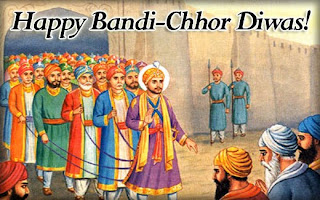 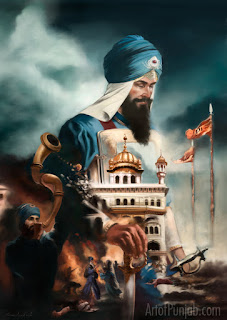 Our 6th Guru represents Freedom & Eqaultiy for all alongside sovreign
rule of the Sikh Nation through Sri Akal Takht Sahib which he built enshrined in the
Miri Piri Concept of Spritual and Temporal which the 2 Swords on the
Khanda represent.So on this day lets take a moment aside to reflect on
the Sovreignighty bestowed on us by our Guru and advance the cause of
Freedom - which is the need of the Sikh Nation.

The Hindutva backed Indian Police once again toady showed that Sikhs DO NOT HAVE the right to peacefully protest the abuse of their Human Rights,nor do they have the right to mark the week of the Sikh Genocide in November 1984.

Leaders of Dal Khalsa,Khalsa Action Commitee,Shiromani Akali Dal Panch Pardani,alongside a whole host of other supporters and organistations were arrested and locked up.Sikh leaders were holding a Panjab shutdown to mark 26 yrs of the Sikh Genocide to express solidarity with families as well as show Hindu India we have not forgotten the atrocities commited on us.

Below are some news reports :

Chandigarh, Nov 3 (PTI) Police today detained some Sikh leaders in Amritsar, who were squatting on rail lines, as part of the Punjab bandh call given by some Sikh groups including Khalsa Action Committee (KAC), the Dal Khalsa against the 1984 anti-Sikh riots. Dal Khalsa spokesperson Kanwar Pal Singh and KAC Chairman Bhai Mokham Singh were among those taken into preventive custody by the Amritsar police this morning. Kanwar Pal Singh claimed that they were peacefully squatting on the rail lines near the Amritsar railway station when the police "forcefully had us removed from there". While, police claimed that they tried to stop the Amritsar-Delhi Swarn Shatabdi. Kanwar claimed that the police had made around 300 preventive arrests throughout the state to foil their bandh. He also claimed that those shopkeepers and other commercial establishments which voluntarily wanted to join the bandh were also forced to open their shops by the police at various places in the state. The police, however, denied the allegation. The bandh call was given by the Dal Khalsa and others, who described the 1984 incident as "genocide of Sikhs". Last year on November 3, various Sikhs groups had given a call to protest alleged inaction against the 1984 riots accused. Meanwhile, the bandh has evoked partial response in Jalandhar with the rail and road traffic plying normal in the area. The banks, commercial establishments and schools were closed in the wake of the bandh call. There was, however, no report of any violence from the region. Security has been beefed up, police said.

Ludhiana (November 3, 2010): Punjab shutdown call given by Sikh organizations evoked mixed response in Punjab, which remained totally peaceful as no untoward happening is reported from any part of the state.Shutdown was called by Sikh organizations to protest against denial of justice to the victims of Sikh Genocide 1984, in which thousands of Sikhs were burnt alive by Hindu mobs in just three days. Sikhs were targeted in a systematic and organized manner throughout India after assassination of the then Prime Minister of India, Indira Gandhi. Mrs. Gandhi was assassinated by two of her own body guards, both Sikhs, on 31 October 1984 after she ordered armed attack on Sikh theo-political centre Darbar Sahib (Amritsar) in June 1984. Code-named as ‘Operation Blue Star’, this armed attack left thousands of Sikhs murdered by Indian army. Sikh reference library was reduced to ashes after the attack by Army and building of Sri Akal Takhat was destroyed with cannon shots.

“Impartial reports on Sikh Genocide of November 1984 revealed that same pattern was followed at all places wherever Sikhs were targeted, and further that political leaders belonging to the ruling regime of India, the Congress Party, led the mobs that massacred Sikhs.” said Kulbir Singh Barapind of SAD (Panch Pardhani), who accused Indian State for organizing the massacre and later patronizing the culprits.

Today’s shutdown call began with paralyzing railways across the state, which could only be reinstated after the large scale arrest of Sikh leaders and activists. Police claimed that the arrests of Sikh leaders were necessary to prevent damage to Public property. On the other hand Sikh leaders radicalize police claim. “There was no apprehension of violence. Even last year Punjab bandh call was completely peaceful. Police and Government made unsuccessful attempt to demoralize the Sikhs by arresting leaders” said Kanwarpal Singh of Dal Khalsa, who was taken into custody by Amritsar Police along with Bhai Mohkam Singh, Harcharnjit Singh Dhammi and others.

Shiromani Gurudwara Prabhandak Committee (SGPC) controlled by Badal Dal observed Ardas Divas to remember victims of Sikh Genocide at various historic Gurudwaras, including Darbar Sahib (Amirtsar) but ordered all the offices and education institutions controlled by it to remain open. 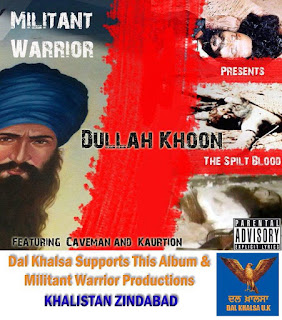 The spilt blood 'Dullah Khoon' of these Martyrs has watered the Sikh Movement for Freedom for generations to come. For every drop of blood that has drenched the soil of Panjab for the freedom of the Sikh Nation will give birth to revolution and lions that will fight the tyranny and defend the Sikh Nation from the destruction that Hindustan and it's Hindutva Nazi Hindu Fascist rulers have unleashed on the Sikhs since 1947 - 1984 - till now.

Upon hearing the songs in this album one is reminded of the sacrifices of some of the greatest Sikhs who have walked the Path of Shaheedi and have lived up to the Sikh tradition of facing tyranny and oppresion head on.

We believe the Sikh Youth across the UK and indeed the entire World will be inspired by this album.From hearing the words of Mahan Shaheed Sant Jarnail Singh Ji Khalsa Bhindranwale to the echoing words of Shaheed Baba Gurbachan Singh Manochahal to a tribute to the Sahibzadeh.One is taken on a journey through which we witness Sikh Valour,Sacrifice & the determination to carry on the path of righteousness no matter what the odds.

We applaud Militant Warrior Productions for this Mahan Seva in helping to advance the message of Freedom,the Shaheeds & indeed the Sikh Movement for Freedom - Khalistan.Media such as Music,Videos and the Internet is more important than ever in today's technological World.Media such as the Revolutionary Music in this album is essential in waking up the masses to the truth about the hidden Genocide that the World as well as some so called Sikhs fail to see.

All in all a brilliant effort and we hope to see more of the same very soon!

We ask that all Sikhs support this album which can be downloaded from the link below,and to join the Facebook fanpage.