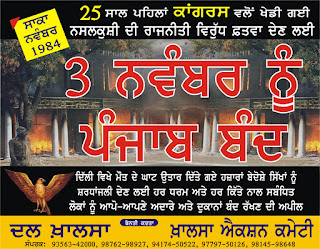 Dal Khalsa today calls for a total shutdown of the Sikh Homeland - PANJAB - to mark 25 years since the Sikh Genocde across India & Delhi in November 1984.

After 2 Sikh Heros Shaheed Bhai Satwant Singh Ji and Shaheed Bhai Beant Singh Ji SHOT DEAD and eliminated Indira Gandhi for her brutal genocide against Sikhs and Military attack on the Golden Temple.Hindu Mobs led by the Congress,BJP,RSS and other Hindutva outfits like the Bajrang Dal called for the blood of Sikhs for a whole week every 3 seconds a Sikh was killed in a genocide never before seen in the history of the Sikh Nation.

Women were raped in Operations like OPERATION SHUDI KARAN
http://www.youtube.com/watch?v=ogwT_A4Oidw

AMRITSAR: In a significant development, the Dal Khalsa with the active support of Khalsa Action Committee (KAC) gave a clarion to people of Punjab to observe complete shutdown on Nov 3 to mark the 25th anniversary of Nov 1984 anti-Sikh massacre in Delhi and elsewhere.
Addressing the press conference here on Friday, the leaders of the Sikh group Harchranjit Singh Dhami and spokesperson Kanwarpal Singh said Punjab would remain close on the day when 25 years ago nearly 10 thousand innocent Sikh men and women were butchered in the capital that housed the Presidential Palace, Parliament and Foreign Missions.

The objective of the shutdown call is to express the anguish against the genocide engineered by Congress, expose the perpetrators and Indian justice system that has denied justice to victims besides paying homage to those who have been killed in a systematic and planned manner.

Bhai Mohkam Singh chairman of the KAC- a conglomerate of various Sikh outfits, while endorsing the call said that only essential and emergency services including medical services will be allowed during the total shutdown.

Dhami appealed to the Sikh community and members of various outfits to take part in the bandh. He asked lawyers, students, government employees and traders to stage protest demonstrations on the day. The group called for a shutdown the state on Nov 3. Shops, business establishments, educational institutions and banks will remain closed in observance of the shutdown call.

They said the shutdown would be peaceful. “We are realistic. The leadership would ensure that discipline is to be maintained during the strike”.

Blaming squarely the senior leadership of Congress for anti-Sikh carnage, they said whenever injustice goes unpunished and the perpetrators of crime were rewarded with cabinet posts, the terrible beast of communalism is revived in more horrific ways. To drive their point home, they said had the perpetrators of 1984 massacre faced the music of law the horrific events of Gujarat in 2002 and Orissa in 2008 would not have occurred.

Taking a dig at nine investigative commissions set up by various Union governments to look into the genesis of the Nov 1984 genocide, they said all ended up as a damp squib.

The irony of the situation is that the Congress playing the chankiya neeti used a Sikh face of Dr Manmohan Singh- who himself saved his life from Congress hooligans during carnage, to express regret on 1984 happenings two years back. However, they pointed out that such regrets hold no water since perpetrators were not only roaming free but have been given plump posts in the hierarchy of Congress.

To a question, they asked the Sikhs outside Punjab to observe the day in one way or the other. They made a fervent appeal to SGPC, Damdami Taksal, Akand Kirtani Jatha and DSGPC to extend full support for the cause. Others who were present include Ranbir Singh and Gurpreet Singh Mann, president and vice-president of Sikh Youth of Punjab, Dal Khalsa executive committee members Sarbjit Singh Ghuman and Baldev Singh Ajnala.