A mass Grave of Sikhs killed in November 1984 has been discovered after 26 years in village Hondh-Chillar, District Rewari, Haryana. The village was inhibited by several Sikh families and on November 02, 1984 in an organized and well planned attack, the entire village was burnt along with its Sikh population and Gurudwara. The village consisting of torched houses, burnt Gurdwara and scattered human bones has been now been discovered.

The genocidal site of village Hondh-Chillar is discovered by the sustained and unceasing efforts of Engineer Manvinder Singh Giaspur.

As per attorney Gurpatwant Singh Pannun Legal Advisor to Sikhs For Justice, the forlorn debris and human remains at village Hondh-Chillar discovered after 26 years are the most specific and convincing evidence of Sikhs localities being attacked and wiped out throughout India in a identical pattern in which armed groups lead by Congress Leaders would cordon the Sikh neighborhood, rape the women and burn the men and children alive.

The discovery of Mass Grave of Sikhs in Haryana proves that Nanavati Commission’s scope of inquiry into the killing of Sikhs was gravely insufficient and eyewash because the commission did not look into killings of Sikhs that took place outside Delhi added attorney Pannun.

According to Karnail Singh Peermohammad scores of Sikhs living in the village were burnt to death on November 02, 1984 and the Police neither identified the dead nor investigated the killing of Sikhs. According to the FIR filed by Ghanpat Singh Sarpanch and other eyewitnesses, the Sikhs population of the village was attacked on November 02, 1984 by a group of about 500 people who came in Trucks and were armed. The group was shouting “Ye Sardar Ghaddar hain, Inn ko khatam karain ge” (These Sardars are traitors and we will wipe them out).

The attackers surrounded the Sikh houses and started throwing petrol bombs into the houses of Sikhs. Men and children were beaten and thrown into the burning houses and women were first raped and then thrown into the fire. Sri Guru Granth Sahib was desecrated and Gurudwara was put on fire.

AISSF and Sikhs for Justice (SFJ) will approach United Nations, Amnesty International, Human Rights Watch and South Asian Human Rights Commission to visit the site of Sikh Mass Graves in village Hondh-Chillar and investigate the attack on Sikhs that took place throughout India in November 1984.

As more details emerge the reality will hit home to the Sikh Nation and to those who deny a genocide ever took place.State sponsored Hindu Terrorists raped Sikh Girls/Women tried to create a new race,murdered Sikh Men/Boys and even butchered innocent infants,while at the same time burn and bomb our Guru Ghars using their genocidal power drunk Hindu Bhaman Armies.

All this to wipe the Sikhs off the face of this Earth and to establish Hindutva Hindi,Hindu,Hindustan.Dal Khalsa International or indeed the entire Khalsa Panth sees no difference between the so called Congress or BJP they are two sides of one Hindutva coin and their aim is ONE AND THE SAME the total destruction of the Sikh Religion and Sikh Nation in every sense of the word.

Sikhs may fight in between each other today over all sorts of issues but REMEMBER ONE THING if you came in to the crosshairs of those Hindu Mobs and that Indian Army during the Genocide your mother/sister/wife/daughter would have been raped and killed alongside you.Your local Gurdwara would have been up in flames and our Guru Dhan Dhan Sri Guru Granth Sahib Ji Maharaj would be on the street set alight,stepped upon and even urinated on by these blood thirsty Hindu Terrorists.

THE ONLY SOLUTION IS TO START AT HOME AND EDUCATE OUR NATION ON WHAT HAPPENED AND WHAT IS HAPPENING TO US & TO KEEP UP THE FIGHT FOR SELF DETERMINATION IN THE FORM OF AN INDEPENDENT KHALISTAN.Only last month an Amritdhari Singh Shaheed Shaminder Singh Shera was killed by the Indian Police after torture and accusations of him being a terrorist - his only crime? he was an Amritdhari Sikh.Drugs,Alcohol and other narcotics are being pumped in to Panjab to hook our youth upon and finish future generations.Our River waters are being poisoned or diverted to other states,farmers are being forced in to debt after which they commit suicide,the land does not get enough water and will be a desert in a few years,false babas are raping and brainwashing Sikh women and girls,while our Singhs get shot in places like Ludhiana for peacefully protesting against Fanatical Hindu Dera Babas like Ashutosh who has said his aim is the conversion of Sikhs to Hinduism.Our Jathedars of the Takhts and leaders are at the feet of these Bhaman power masters who even have control over our Sri Akal Takht Sahib and other shrines.Our history is being changed and Hindufied as we speak to confuse our youth and nation - the ultimate aim once again arises - the destruction of Sikhism and the Sikh Nation and the implementation of Hindutva - Raam Raj.

WAKE UP TO REALITY

STOP FLYING THE FLAG OF INDIA AND CLAIMING TO BE INDIANS 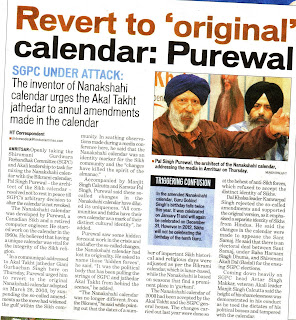 *Destruction of the seperate Sikh Identity.

Dal Khalsa UK openly declares that these charcters behind the changes are traitors and sell outs bent on having control over the Sikh Nation,and vested intrests within them want Sikhism to be dissolved in to the Hindu fold of Hindutva Hindi,Hindu,Hindustan.The RSS Leader went on record to say he will not let the Nanakshahi Calendar survive and that Sikhs should celebrate or mark occasions using the useless unscientific Hindu method - in other words we have to go TO A PANDIT WHO WILL TELL US WHEN TO CELEBRATE AND MARK GURPURABS.

Sri Akal Takht Sahib needs to be liberated from those sellout Jathedars and leaders like Parkash Chand Badal who fall to the feet of their Hindutva Fascist Masters and their regimes in Delhi.

AMRITSAR: Pal Singh Purewal- the architect of the Nanakshahi calendar Thursday openly took the SGPC and Akali leadership to task for mixing the Nanakshahi calendar with Bikrami and resolved not to rest in peace till the arbitrary decision of the SGPC to alter the calendar was not revoked.
Notably, the Nanakshahi Calendar was developed by a Canadian Sikh, Pal Singh Purewal, a retired computer engineer. He started work on the calendar way back in 1960s.
In a communiqué addressed to the Akal Takht jathedar he urged him to revert to the original calendar adopted on 28 March 2003 by suspending the so-called amendments as the move had widened the gulfs within the Sikh community.
In scathing observations made during press meet at Dal Khalsa head office in Amritsar, he said the Nanakshahi Calendar was an identity marker for the Sikh community and the changes have killed the spirit of the almanac.
Accompanied by Manjit Singh Calcutta and Kanwar Pal Singh, Purewal said these so-called changes in the Nanakshahi Calendar have diluted the uniqueness of the Sikh almanac. “All communities and faiths have their own calendar as a mark of their distinct cultural identity”, said he.
He said after the so-called changes the mix-up calendar was no longer the Nanakshahi calendar. Ironically, it's Nanakshahi only in name and that's meant to hoodwink the Sikhs.
Dal Khalsa leader Kanwarpal Singh rejected the so-called amendments and supported the original version as it emphasized separate identity of Sikhs from Hindus. He said the changes in the calendar were made to appease Sant Samaj. To a question, he revealed that there’s been a
electoral deal between Sant Samaj and Badal Dal for the ensuing SGPC elections.
Coming down heavily on the SGPC head Avtar Singh Makkar, veteran Akali leader Manjit Singh Calcutta said the height of his shamelessness was demonstrated in his conduct as he toed the dictates of his political bosses and tampered with the calendar- the symbol of Sikh separate
identity.

Amritsar, February 17
Challenging those who are objecting to the original Nanakshahi calendar to show their credentials, Pal Singh Purewal, the calendar’s architect, today flayed the amendments made to it, saying the changes made as mere amendments will be a misnomer as the entire base of the calendar has been changed.

Showing copies of a letter that he has written to Akal Takht Jathedar Giani Gurbachan Singh in this regard here today, Purewal said, “We had fixed the dates of all 12 sangrands and all major gurpurbs except for three in our calendar. But now they have reverted to Bikrami calendar for observing all sangrands and four gurpurbs — Gurta Gaddi Diwas of Guru Granth Sahib, the Martyrdom Day of Guru Arjun Dev and birth and death anniversaries of Guru Gobind Singh. As a result of this, the birth anniversary of Guru Gobind Singh will be celebrated twice in 2011, 2014, 2017, 2022 and 2025 while it will not fall in 2012, 2015, 2018 and 2023.”

In 2014 and 2025, the birth anniversary of Guru Gobind Singh, falling in December for the second time in these years, will coincide with the martyrdom day of his younger sahibzadas as per the amended calendar, he added.

Purewal said, “I have written this letter to the Jathedar based on technical facts and not opinions. I challenge the people objecting to the original calendar to show their credentials. They have no right to criticise the calendar.” He said he had decades of experience in the field and had to his credit 500-year calendar based on solar charts and 1,500-year Hijri Calendar. He said the Sikh Panth never witnessed as much unanimity and unity as it did during the implementation of the original calendar in 2003. “If the amended calendar has no shortcomings, why the Akal Takht Jathedar, during his foreign tours, needs to appeal every gurdwara to follow it,” he wondered.

According to Purewal, 80 per cent of the gurdwaras abroad are following the original calendar. He said the problems, which were sorted out in the original calendar, were back now and today’s version was a mixture of both the Nanakshahi and Bikrami Calendars. He blamed “vote-bank politics” for the changes made in the calendar. “It is all politics and no science in the move,” he added. He said all, except for some fringe groups, accepted the 2003 version of the calendar and the Panth should revert to it.

Former SGPC secretary Manjeet Singh Calcutta and Dal Khalsa secretary-general Kanwarpal Singh Bittu, who were also present, alleged that the RSS was behind these amendments.

‎**We Pay Tribute To Shaheed Shaminder Singh Shera,Who Was Illegally Detained,Accused Of Being A Terrorist,After His Escape He Exposed What Happened He Was Attacked A Month Ago By Assassins & Later Died - His Only Crime Was That He Was An Amritdhari Sikh - Another Example Of How Hindu-tva India Wants To Destroy Sikhs & The Sikh Nation** 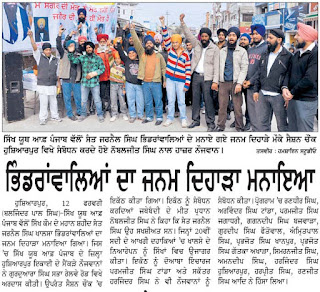