WATCH THIS VIDEO & LEARN TOO MANY SIKHS LIVE IN A DREAMWORLD THIS IS THE REALITY,WHILE PANJAB IS ENSLAVED UNDER HINDUTVA INDIA THE BHAMAN ELITE ALONG WITH THE WORLD'S ELITE ARE GETTING RICHER & RICHER MAKE NO MISTAKE YOU MEAN NOTHING TO THEM YOU ARE A SLAVE IN TERMS OF THE SIKH NATION ALL THIS HAS HAPPENED TO PANJAB ALREADY - THIS VIDEO APPLIES TO EACH AND EVERY SINGLE ONE OF YOU - WAKE UP!

NEWS OF THE PETITION IN THE PANJAB TIMES AGAINST MUNDILL MAHIL'S 6 YEAR SENTENCE WHICH IS NOT ENOUGH! SHE WILL BE OUT IN LESS THAN 3,MUNDILL'S FAMILY HAVE SAID THEY WILL APPEAL FOR A SUSPENDED SENTENCE SIGN THE PETITION NOW!!! JUSTICE FOR GAGAN http://www.ipetitions.com/petition/appealing-six-year-sentence-for-gbh-with-intent/signatures PLEASE SHARE THE PETITION LINK ON YOUR WALLS/GROUPS/PAGES & WITH FRIENDS/FAMILY 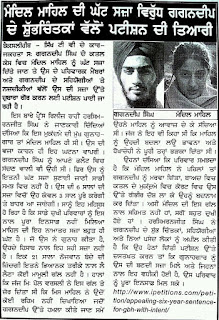 Dal Khalsa UK Wishes You All A Happy Holla Mohalla

KONY 2012 from INVISIBLE CHILDREN on Vimeo.


ALL OF YOU WATCH THIS - APPLY IT TO THE PLIGHT OF PANJAB THE SIKH GENOCIDE - TAKE ACTION - CREATE YOUR OWN MEDIA,DWNLD OUR MEDIA,GET OTHERS TO JOIN THIS PAGE & BY JUNE THIS YEAR WE WANT 125,000 SIKHS IN LONDON REMEMBERING THE SIKH GENOCIDE & DEMANDING THE GENOCIDAL HINDUTVA KILLERS BE BOUGHT TO JUSTICE,ALONG WITH FREEDOM.ALL SIKH COMMUNITIES WORLDWIDE USE YOUR 'VOTE' PROPERLY DON'T VOTE FOR THE SAME PARTIES MAKE DEMANDS USING TACTICAL VOTING ONLY THEN WILL GOVTS REACT TO THE VOTE SWING YOU WILL CONTROL.... JOIN THIS PAGE INVITE OTHERS...DWNLD ALL OUR MEDIA FROM http://www.youtube.com/dalkhalsa CREATE YOUR OWN MEDIA & BE PRO-ACTIVE NOT REACTIVE!!!

AKALI DAL BADAL & HINDUTVA BJP COALITION WIN THE PANJAB ELECTIONS THIS IS THE 1ST TIME ANY PARTY HAS WON A 2ND TERM IN PANJABS HISTORY.....THIS MAKES NO DIFFERENCE WHATSOEVER TO THE PLIGHT OF THE SIKH NATION & PANJAB EVEN IF CONGRESS WON WE WOULD STILL BE UNDER THE SAME BHAMAN SLAVERY AS WITH AKALI DAL / BJP THEY ARE ALL ONE & THE SAME

NCTC: A dangerous proposal, terrific idea
Designed to stifle the dissenting voices under the garb of combating terrorism
NCTC:Hindutva Legislation Designed To Crush Minority Rights In The Name Of Fighting Terror


The Indian government has mooted a proposal to set up a National Counter Terrorism Centre (NCTC) as a multi-agency centre with an aim to combat the so-called terrorism in the country. The proposal has been put on hold for the time being after various Chief Minister’s have raised their objections describing centre’s move as an encroachment on the powers of state governments.

The Sikhs are opposed to the government's proposal as they apprehend that just as draconian laws were misused to crush dissent, the wide powers to the NCTC would also be deployed to stifle the voice of those who question the bonafide of the Indian state.

The organization has shot off a letter of dissent to the Home Minister Mr. P. Chidambram urging the Indian government to evolve methods for peaceful conflict resolution, by removing the causes of violence as well as making the existing agencies accountable to people and Parliament. The letter has asked the GOI to shelve the idea of creating the new “anti-terror super body”.

Dal Khalsa writes to you to express its opposition to the proposal of setting up of new body named National Counter-terrorism centre (NCTC) without prior deliberations with states, ethnic minority communities, democratic and civil liberty organisations.

While the Indian Union government is understandably concerned about the War on Terror, the Sikh nation and other nationalities are concerned about how to fight the War of Errors of the Indian state. There is no doubt that we are living in dangerous times, but the civility of a government, its respect for rule of law and adherence to precepts of democratic functioning is tested in such times.

Many countries of the world are chasing global peace as a law and order issue without addressing sociological and political issues. India has had a poor perspective of the regional peace issues in the sub-continent. It continues to have a flawed and non-functioning federal structure.

Since decades, minorities, ethnic nationalities and regional groups have faced the wrath of the Indian security agencies. Intelligence bodies connive with the security agencies and play havoc with the lives of people who hold dissenting views.

The proposal to set up the NCTC as a superior organisation of security and intelligence bodies is fraught with danger. As we have suffered in Punjab, such dangers are galore. The impunity granted to the security forces has been responsible for death, torture and illegal detentions. The errors committed by security agencies are not just errors of judgment while in the throes of a battle, but deliberate, pre-meditated and well-executed plans of destruction and death of those “who do not agree” or those who “do not fall in line”.

While we welcome the response of states, this response is based on party considerations. States with non-Congress governments are opposing your proposal while those who see “eye to eye” with you are blindly welcoming it, without realising that once the intelligence and security agencies get powers and impunity from accountability, they turn uncontrollable Frankenstein monsters. The love for federalism, as recently projected in the media is a sham. Most of the states in India are acknowledged violators of the rightful aspirations of their people. It will not be long when for fiscal and political considerations, all will easily “fall in line”.

The manner in which the state of Punjab has been looted by the Centre in the name of restoration of law and order, rights suspended under draconian laws, we cannot buy arguments based on public utterances of your government or even that of the respective state governments. State-terrorism has been stalking the Sikhs for long. With reference to contemporary history, Dal Khalsa apprehends that just as draconian laws were (mis)used to crush dissent, now the wide powers to NCTC will be used to stifle the voice of those who question the bonafide of the Indian state. Dal Khalsa is determined to uphold its right to dissent and disagree.

We believe that resolution of political conflicts cannot be a law and order issue. India has all along made that mistake. From Kashmir to Punjab to the North-East, India has countered “terrorism” purely as a law enforcement issue and not seen it in the realm of conflict resolution within the parameters of human rights obligations. It is time that India does so. Will you consider our proposal or still ride roughshod the way it has been happening over the decades?

We urge your government to do re-thinking on the proposal to set-up NCTC. Instead of going for the creation of a new “anti-terror super body”, your government should evolve methodologies for peaceful conflict resolution thereby removing the very cause for violence as well as making the existing security and intelligence agencies accountable to people and the Parliament.

On the 26th of February at Baba Deep Singh Ji Gurdwara Ulhasnagar Mumbai ,the entire Sachkhand Room including Sri Guru Granth Sahib Ji Maharaj was burned by a 'bhaiya' these are the foot soldiers of the Hindutva Movement,don't be fooled by their friendly talk or apperance when it comes to attacking Sikhi they go directly for our Guru Sahib.