Dal Khalsa UK would like to urge all Sikhs to support the Tamil cause for Freedom and Justice on June 20th just as they supported us Sikhs at our rally for freedom on June 7th 2009.Had the tamil nation known in more advance about our rally they would have bought a huge number of people to the rally but we thank those Tamils who came at the last minute to stand shoulder to shoulder with the Khalsa Panth against the Nazi Terrorist Regime of Hindustan.

The Tamils will also be holding their own rally on June 20th flyer below, we urge Sikhs to support them in this rally just as they supported us,they didn't have to come but chose to do so.

Dal Khalsa UK would also like to honour the great Shaheed Prabhakaran who died fighting for the cause of Freedom till the very last moment.Shaheed Prabhakaran led the Tamil Nation in the struggle for the last 30 years and helped the Khalsa Panth in a huge manner in eliminating the Terrorist Rajiv Gandhi ,not only was he responsible for the killings of innocent Tamils but for the Genocide of Sikhs across India he exclaimed 'Lets teach these B****** Sikhs a lesson' 'Replying to why the violence was so bad he claimed 'When a big tree falls the ground shakes'.

This terrorist like the evil woman who gave birth to him rejoiced at the pictures of Sikhs being killed raped and looted through planned ethnic cleansing and a full scale genocide.

Shaheed Prabhakaran ordered the elimination of this Terrorist Nazi Criminal who had the blood of tens of thousands of Tamils and Sikhs on his hands,as on the rally Dal Khalsa thanked the Tamils for this huge favour they did for us as well as for themselves,had Rajiv survived who knows what more terror he may of had planned.

We would like to announce to the World that Tamils & Sikhs stand united in the cause for Self Determination and Freedom for Khalistan & Tamil Eelam and we stand united against the Terrorist Regimes of Hindustan & Sri Lanka,who carry out State Sponsored terrorism on minorites be they religious or ethnic. 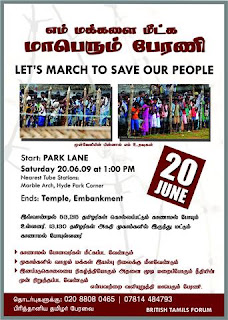 Dal Khalsa on behalf of the sikhs fully supports the tamil nation in its quest for Freedom and Nationhood from the Terrorist Indian/SriLankan Govts.We invite all to join the rally on 20 june as showen in leafletabove.We are indebted to the tamil nation for standing by Sikhs for the last 25 years and we honour the great Shaheed (martyr) Prabhakaran who punished Rajiv Gandhi a genocidal killers responsible for the killings of 10,'s of thousands of Sikhs across India after 1984.After his mother was punished by two Sikh Heros Shaheed Satwant Singh & Shaheed Beant Singh he was recalled saying 'lets teach these Sikh Bastards a lesson'.The elimination of this fanatical terrorist of India was a milestone in the on going fight for freedom for Sikhs alongside Tamils.We honour the legacy of Shaheed Prabakaran who fought for the freedom of tamils till the very last moment against tyranny,he is truly a hero to the Sikh Nation as much as he is to the tamil peoples.We would also like to thank the Tamil nation for joining us on the Sikh Rally for Freedom which happened on the 7th of June 2009 from Hyde Park to Trafalgar Sq,we whould endevour to work together in the future as well for the Freedom of both nations,for our common goal is nationhood and our oppressors are the same Govts and leaders.The Indian regime cannot silence the calls for Freedom whether its Panjab ( Khalistan ) or Tamil Eelam ( Tamil Homeland ).A clear message was sent to India and Sri Lanka on the Sikh Freedom Rally that Sikhs and Tamils are united across the World against injustice and state sponsored terrorism.The Tamils should be proud of having leaders like Prabhakaran who led them for 30 years in the struggle for nationhood,as you know the Sikh freedom movement was crushed in a genocide and a whole generation was wiped out starting with the military terrorist attack on the Golden Temple in Amritsar where our Sikh leader Shaheed Sant Jarnail Singh Bhindranwale died defending the holy shrine.Now new generations of tamils and sikhs who have been born outside their homelands are carrying the struggle to the very forefront of the Western World and its Cities,the Indian /Sri Lanakan Regimes should make no mistake in commiting further atrocities on our people for we will continue the march to freedom and will continue to work together and expose these terrorist rouge states for what they are.

A MILESTONE AND A TIME TO ADDRESS GENOCIDE 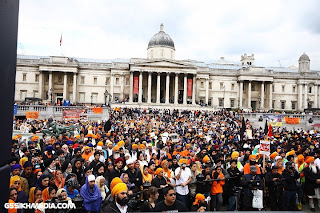 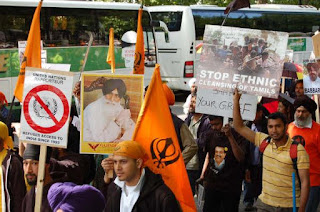 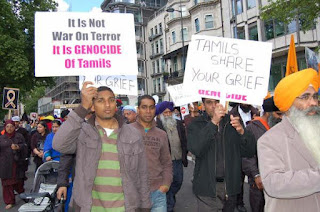 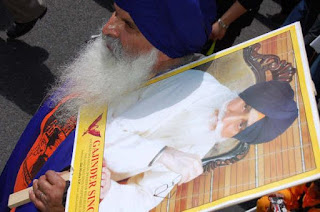 MARCH AND RALLY OF FREEDOM AND REMEMBERANCE

A MILESTONE AND A TIME TO ADDRESS GENOCIDE

This week marks the 25th anniversary of the infamous Indian army attack on the Golden Temple in Amritsar as well a 37 major Sikh shrines in Punjab. Thousands of innocent Sikhs were brutally killed while the Red Cross, human rights bodies and the media were banned from the region. The holy Akal Takht Sahib – the seat of Sikh temporal power – was reduced to rubble by tanks and artillery and the Sikh Reference Library containing thousands of artifacts and original manuscripts of the scriptures was deliberately looted and then burned down.

Those horrific events were followed by the genocide of the November 1984 anti-Sikh pogroms in Delhi and other Indian cities, after Indira Gandhi was assassinated, in which organised gangs butchered over 20,000 Sikhs whilst the police looked on. The ensuing years saw systematic abuse of human rights with the enactment of ‘black laws’, extra-judicial killings, disappearances and secret cremations, and the routine use of torture on a massive scale. In all, some 200,000 Sikhs were killed in the conflict from 1984 to 1995.

A quarter of a century later none of the guilty have been been brought before any domestic or international court. The reality is that the perpetrators have been given legal immunity by Indian authorities, with many of them continuing to hold high political office. Human Rights Watch, Amnesty International and others have condemned this impunity and it now falls to the international community to act.

After 25 years of deliberate inaction from India’s political and judicial establishment, Sikhs are calling for an international court to take up the challenge, similar to the UN established courts dealing with genocide in the former Yugoslavia and Darfur.

At the same time we honour the memory of those who have lost their lives under the brutal state terrorism of the Indian state. In their cherished name we pledge to secure justice and redress.

FREEDOM: INDEPENDENCE AND DIGNITY OF THE SIKH NATION

The Sikh Nation, a proud and distinctive people which made huge sacrifices in both World Wars for the freedoms and dignity of others is today living under occupation a hegemonic Indian state since the departure of the British in 1947. Having been denied its own freedom and suffered massive losses in the Partition process, the Sikhs were then denied recognition as a nation and even declared to be “Hindus “for the purposes of India’s constitution.

Systematically they were denied civil and political rights in their own homeland in Indian-controlled Punjab. The precious natural resources of the Punjab have been appropriated by an increasingly centralised unitary state which continues to be governed by ruling elite which has also denied the region crucial investment, leaving its economy in ruins. 75% of Punjab’s river waters have been taken by other Indian states for decades, in contravention of riparian law and without compensation, leaving experts to predict it will become a desert by 2010.

The Sikhs have, as a freedom loving people, tried to secure recognition and autonomy within India since 1947 but their numerous peaceful agitations were rejected out of hand; instead India resorted to state terrorism on a massive scale to suppress the legitimate demands of a defenceless people comprising just 2% of the population. In 1984 the level of state violence reached genocidal proportions, starting with the with the attack on the Golden Temple in June 1984 in a full scale deployment of the military to crush the Sikhs.

In 1986 the Sarbat Khalsa (national gathering of the Sikhs) resolved, in an historic decision responding to Indian aggression, to sever ties with India and establish a sovereign independent state of Khalistan to secure its territory, people and destiny. That peaceable and democratic exercise was met with further aggression as India refused to even recognise the need for a political settlement of any kind. Today that intransigence means no resolution of the conflict has been allowed to emerge.

The Sikhs of Punjab are committed to resolve the conflict in a manner which respects their right of self-determination, in accordance with international law. Their political leaders are however even now still being criminalised (19 were charged with sedition last month) simply for peacefully and democratically voicing that commitment.

“All peoples have the right of self-determination. By virtue of that right they freely determine their political status and freely pursue their economic, social and cultural development.”

- Article 1 of the International Covenant on Civil and Political Rights

The march and rally in London on Sunday 7th June 2009 is intended to highlight the cause of Sikh independence which along with the resolution of India’s other conflicts, such as in Kashmir, Assam, Nagaland, Manipur and Bodoland and elsewhere will bring justice and the rule of law to what has become the graveyard of freedom and theatre of state terror in South Asia.