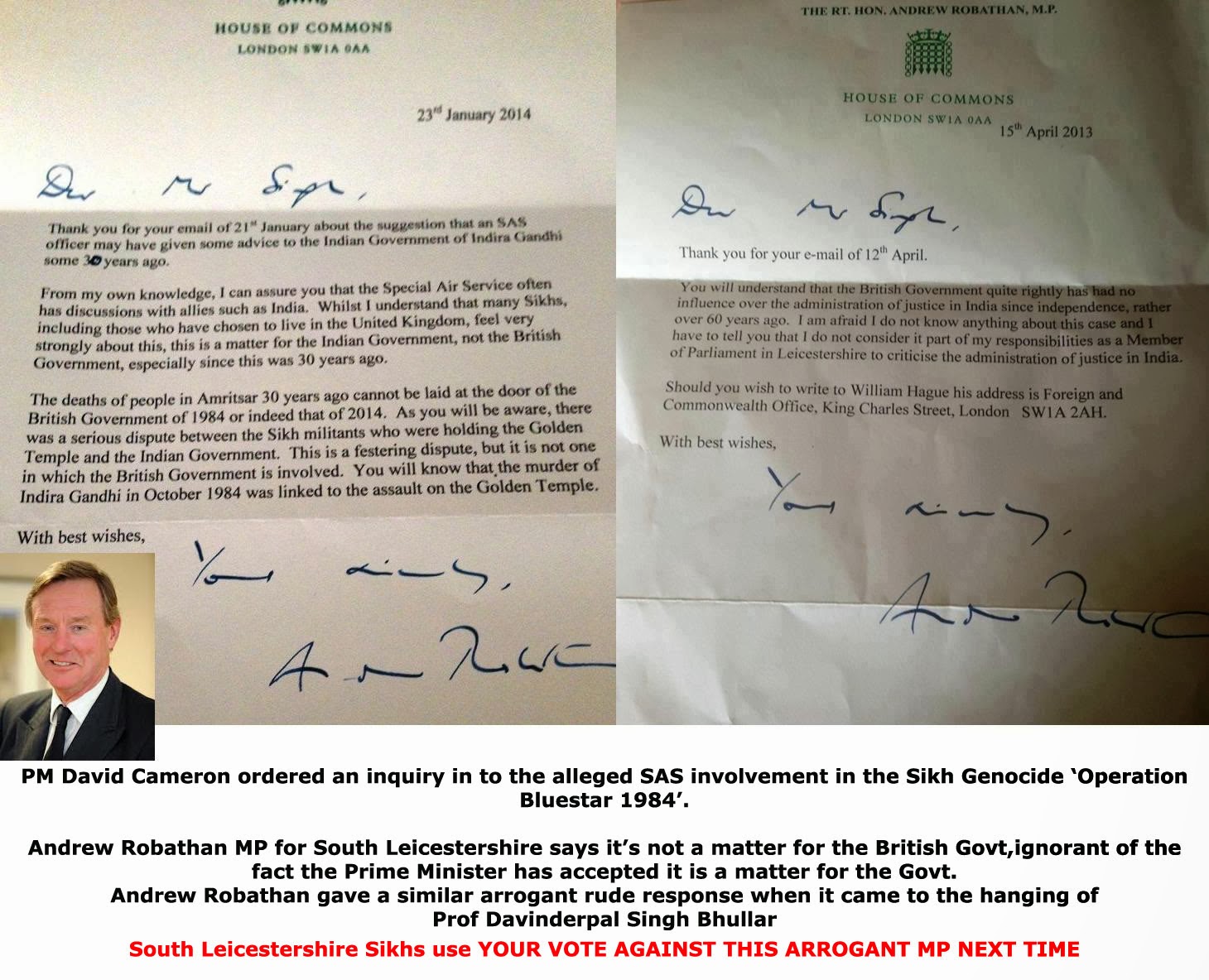 ARROGANT MP GIVES HIS RUDE RESPONSE ONCE AGAIN ON SIKH ISSUES..THE 1ST TIME IT WAS REGARDING THE HANGING OF PROF BHULLAR - NOW OPERATION BLUESTAR 1984 SOUTH LEICESTERSHIRE SIKHS - VOTE HIM OUT IN THE NEXT ELECTION! 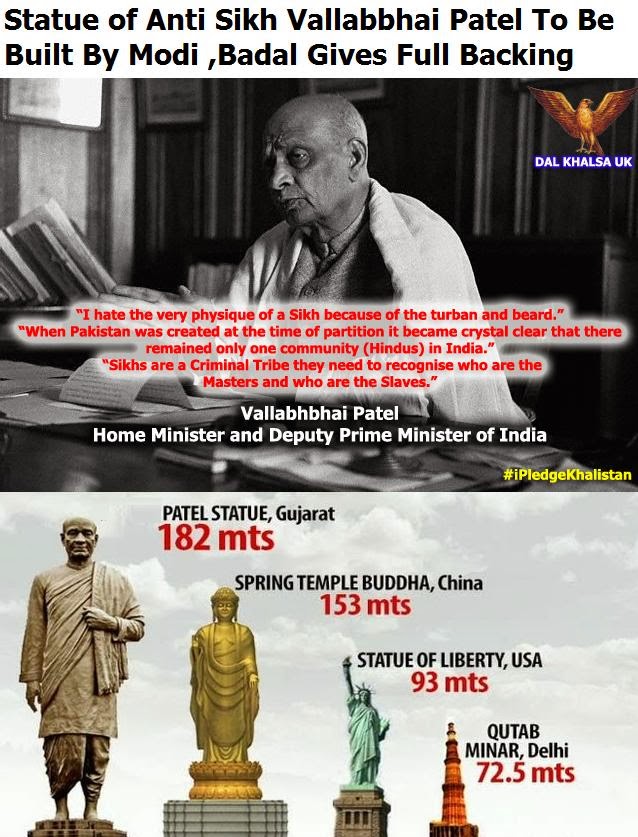 BIGGEST STATUE IN THE WORLD TO BE BUILT OF HINDUTVA TERRORIST PATEL,SOIL & WATER HAS BEEN TAKEN FROM THE AMRITSAR SAROVAR FOR THIS..BADAL HAS ALSO STARTED COLLECTING METAL FROM ALL VILLAGES IN PANJAB FOR THIS PROJECT STARTING WITH HIS VILLAGE....

IT TOOK THE WORLDS 3RD LARGEST ARMY THE HINDUTVA INDIAN ARMY WITH SUPPORT FROM ALL MAJOR WORLD POWERS OVER 1 WEEK TO TAKE CONTROL OF SRI HARMANDAR SAHIB...LESS THEN 150 SIKH DEFENDERS..THIS BATTLE RIVALS THE BATTLE OF CHAMKAUR,SARAGHARI & COUNTLESS OTHER BATTLES..WITH WORLD WAR 2 WEAPONS THE SIKHS TOOK ON THE MILITARY MIGHT OF THE HINDUTVA ARMY & THE MODERN WORLD..! THIS IS THE BRAVERY OF THE KHALSA PANTH! 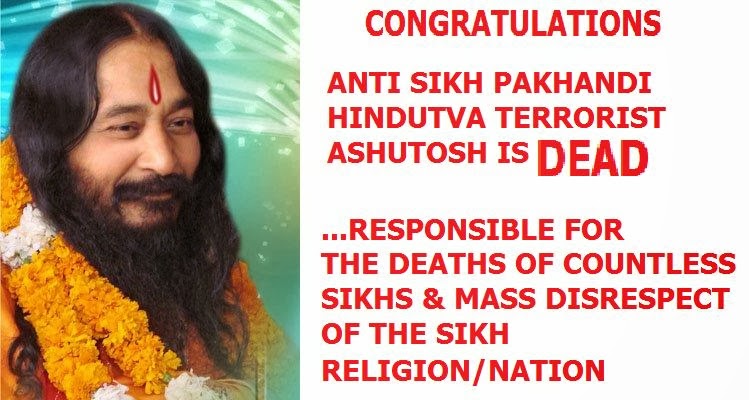 **BREAKING NEWS** ASHUTOSH ANTI SIKH HINDUTVA TERRORIST IS DEAD! HE DIED OF A HEART ATTACK THIS MORNING AT HIS DERA..THIS HINDU TERRORIST WAS RESPONSIBLE FOR THE MASSACRE OF SIKHS IN LUDHIANA IN 2009 IN WHICH BHAI DARSHAN SINGH LOHARA ATTAINED SHAHEEDI...ASHUTOSH CLAIMED TO BE GURU..& DISRESPECTED SRI GURU GRANTH SAHIB JI & SIKHS ON COUNTLESS OCCASIONS..HE ALSO INSULTED GURBANI & FORCED HIS RSS FANATIC VIEWS THAT SIKHS ARE HINDUS...

THE REALITY OF PANJAB SUMMED UP IN ONE TRACK - FULL VIDEO OUT SOON... 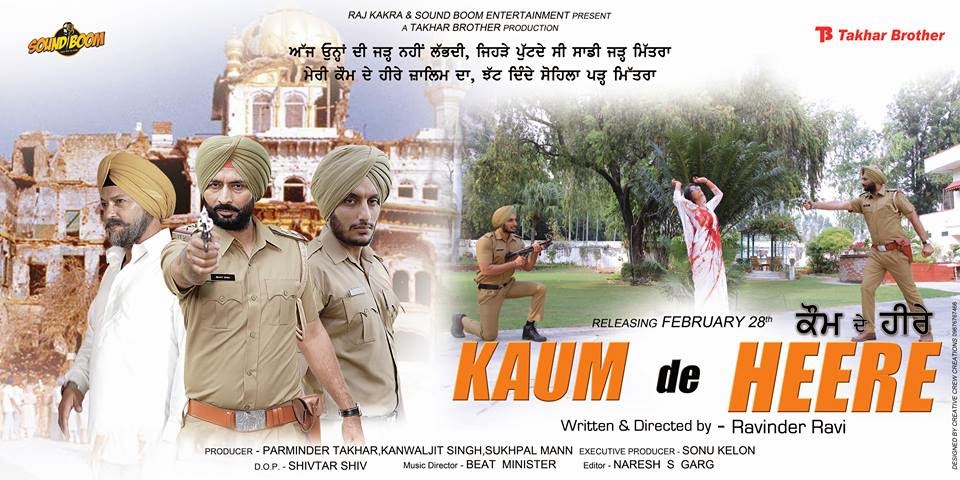 **KAUM DE HEERE UPDATE PLS SHARE**Ravinder Ravi the director of the Film updated the Sangat on the issues surrounding the film in India.The Indian Film Censor Board has rejected the film on the basis that Shaheed Satwant Singh Ji,Shaheed Beant Singh Ji & Shaheed Kehar Singh Ji have been shown as 'Heroes' the board termed our glorious Shaheeds as 'Killers of Indira Gandhi'.They also said the film does not show why the Genocidal Operation Bluestar was carried out,the film Director then asked them to give the answer to this as the Censor board is an arm of the Govt,Ravinder Ravi asked why did the Hindutva Indian Govt attack on such a holy day & why all of a sudden,he reiterated that the Govt should answer this question not the makers of Kaum De Heere.He also pointed out that films have been made on the killers of MohandasKaramchand Gandhi etc but those films were not banned..Our view is that the only reason Kaum De Heere is facing problems is due to the fact that it is the FULL TRUTH & IT SHOWS THE REALITY of Sikh Heroes/Shaheeds,but if a film comes out depicting a Hindutva Leader they pass it,there is always this double standard when it comes to Sikhs.Just like when MK Gandhi was killed by Nathuram Godse a Hindutva leader no Hindus were massacred but when Sikhs eliminated Indira Gandhi for her Crimes a full scale Genocide was carried out......Thankfully the film will be out in the UK and across the World and WILL Not face these issues in Western Countries we ask all to continue to support the film KAUM DE HEERE! (We are still waiting for a written explanation from the Indian Film Censor Board). Will keep you updated. 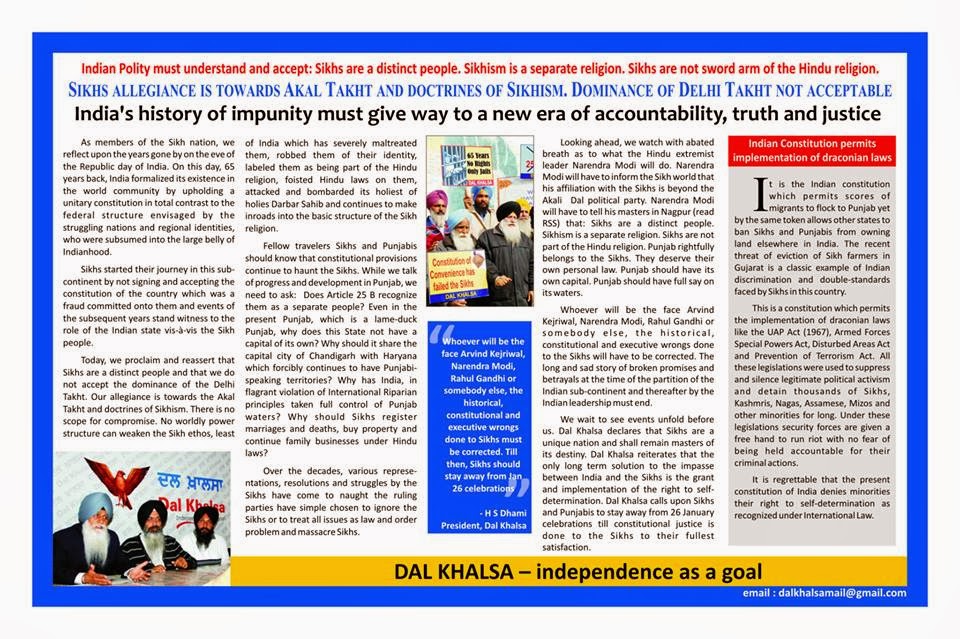 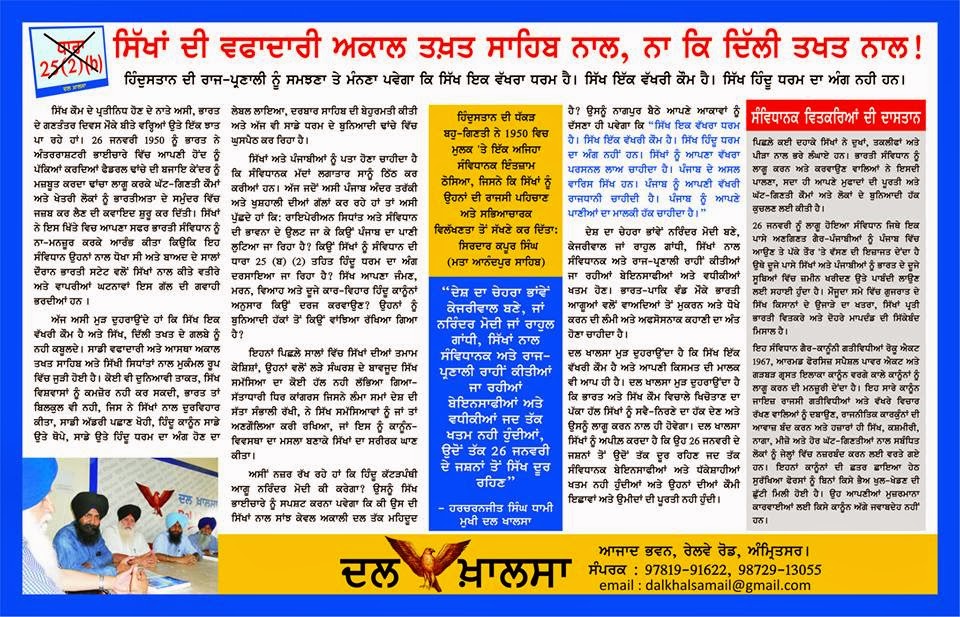 Hindutva Indian Republic Day Is A Black Day For Sikhs

Indian Constitution has failed the Sikhs. Sikhs should stay away from Jan 26 celebrations

Amritsar: Amritsar- Setting the agenda for the next Indian government, the Dal Khalsa said whoever will be the face – Narendra Modi, Rahul Gandhi, Arvind Kejriwal or somebody else, India must end impunity to security forces and grant of right to self determination to minorities including Kashmiris, Sikhs and Nagas.

Dal Khalsa called upon the Sikhs and Punjabi's to stay away from 26 January celebrations till constitutional justice is done to the Sikhs and minorities to their fullest satisfaction.

Hundreds of activists mostly youngsters holding black flags and placards & banners distributed leaflets to passer-by's. They were protesting against the denial of Sikh Personal law and right to self determination beside continued loot of river waters. The demonstrators demanded end to impunity enjoyed by security forces in Kashmir and elsewhere and grant of right to self determination to all struggling peoples.

Speaking at the site of protest, party head H S Dhami said Indian polity must understand and accept that Sikhs were a distinct people and they were not sword arm of Hindus, as wrongly propagated by likes of Sangh Brotherhood. Reasserting that Sikhs have their distinct identity, he said Sikh allegiance towards the Akal Takht and doctrine of Sikhism is total.

The Dal Khalsa leader rejected the dominance of New Delhi. He said while we talk of progress and development in Punjab, we need to ask why Indian state, in flagrant violation of International Riparian principles has taken full control of Punjab waters.

Reflecting upon the years gone by on the eve of the Republic day of India, Damdami Taksal head Baba Harnam Singh Khalsa said the state has severely maltreated Sikh, robbed them of their identity and foisted Hindu laws on them.

Looking ahead, party spokesman Kanwar Pal Singh said we watch with abated breath as to what the Hindu extremist leader Modi would do. He said “Modi will have to tell his masters in Nagpur (read RSS) that: Sikhism is a separate religion. They deserve their own personal law. Punjab should have full say on its waters”.

Dal Khalsa leaders reiterated that the only long term solution to the impasse between India and the Sikhs was the grant and implementation of the right to self-determination.
Advocate Harpal Singh Cheema said the present Constitution permits implementation of draconian laws that were used to suppress & silence legitimate political activism. R P Singh chief spokesperson of Akand Kirtani Jatha blamed that constitutional provisions continue to haunt the Sikhs.

Harping on broken promises made by Gandhi and Nehru, Satnam Singh Paonta Sahib said the history of the Sikhs with the Republic of India is a book stained with much Sikh blood and tears.

The recent threat of eviction of Sikh farmers in Gujarat is a classic example of Indian discrimination and double-standards faced by Sikhs in this country, said Ranvir Singh and Sarbjit Singh Ghuman.