Ever wondered why so called 'Diwali' what we really call Bandhi Chorh Divas when the 6th Guru was released from jail is given more importance more than the Parkaash Purab of Dhan Sri Guru Nanak Dev Ji Maharaj the founder of Sikhism??.The real Bandhi Chorh Divas was at the end of Feb start of March but the Pandits of Hindutva India who have been at war with Sikhi since Guru Sahib rejected the Jinoo,joined Bandhi Chorh Divas with their own festival called 'Diwali' to merge us in to the Hindu majority therefore controlling our destiny.We have to remember here Dhan Guru Nanak Sahib was also sent to jail by Babar but we don't know the date of their release and nor do we celebrate it... At a time when the Sikh Kaum needs its own Calendar the 'Nanakshahi' reinstalled to have proper set dates we also need to reflect not just on the Gurpurabs but on what they actually mean,going to the Gurdwara and eating sweets lighting fireworks is not enough...look at the meaing behind them and why today they are where they are and contemplate how do we get back to getting them to their REAL DATES and real MEANINGS.

*Guru Sahib travelled on foot across the World and in recent times we
have found out they went to Italy Rome.As new information comes out it
now seems Guru Sahib went even further past Europe.
*Guru Sahib refused to wear the Hindu Jinoo of the Bhamans,upon hearing
this the Pandits knew that they're falsehood was in danger of being
exposed,reports were sent to the very elite circles of Bhamanvaad to
counter the Path of Sikhi.
*Guru Sahib was taunted by many,rocks
stones were thrown at Maharaj Ji,and some even tried poisoning Guru
Sahib,yet Guru Sahib refused to give up and continued his mission.


*Guru Sahib was an advanced expert in Martial Arts and in handling
Shasthars/Weapons of all sorts,but this is not shown in depeictions.
*Guru Sahib was always armed with a Sword.
*Guru Sahib established the city of Kartarpur,laying the very foundations of Sikh Raaj be it in the form of a Khalsa Republic under Shaheed Baba Banda Singh Ji Bahadur,Sikh Kingdom under Maharaj Ranjit Singh or Khalistan under the modern day Sikh Nation - Khalsa Panth.
*Guru Sahib was an expert survivalist travelling on foot and living
across all plains be it deserts,swamps,jungles,snowy
mountains,islands,rivers,rapids etc.This was all done without todays technology of GPS,Maps and all the resources we have today to survive.
*Guru Sahib was sent to Jail by Babbar for speaking out against the tyranny that was being unleased upon the people.
*Guru Sahib told the Pope in Rome to abolish slavery,saying we all have the same blood within us.
*Guru Sahibs birthplace is Sri Nankana Sahib Panjab now in Pakistan.
*New information emerging now may well suggest Guru Sahib travelled to Europe as well as the Americas ie: the entire Globe from Mexico to to Russia. 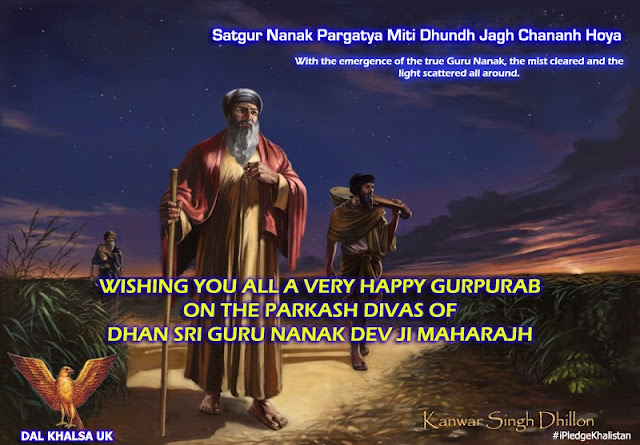 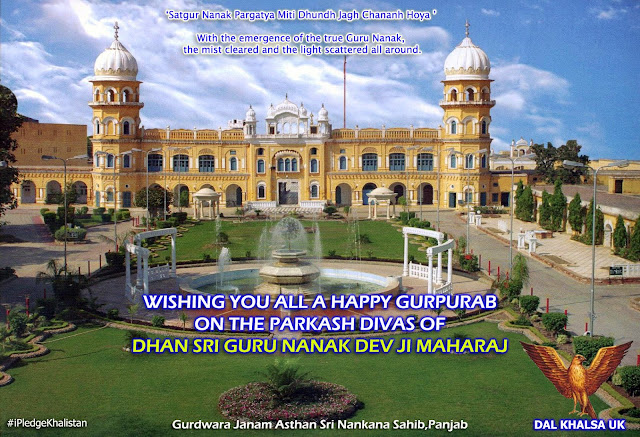 We congratulate the Sikh Nation & the World on the Parkash Divas of our 1st Guru,the Sikh Faith.
Dhan Sri Guru Nanak Dev Ji Maharaj.Guru Sahib was a Revolutionary and a Freedom Fighter in the very sense of the word,who was even sent to jail for speaking out against tyranny.Satgur Nanak Pargateya Miti Dhund Jag Chanan Hoya - With the emergence of the true Guru the mist cleared & light scattered everywhere.Reflect on Sikhi,the values you have within you of Sikhi,Reflect on the sacrifices made to defend this path of Sikhi,remember the Shaheeds as your inspiration they and
Guru Sahib are our inspirations in our struggle for freedom today.The Panth of Dhan Sri Guru Nanak Dev Ji today stands on a cross road where we have to take up the reigns & steer the Sikh Nation to it's rightful destination of Freedom & Equality for all in the form of a Sikh Homeland the foundation of which was laid by our Gurus.Sikhs are BORN REBELS and today we vow that we will renew the fight for freedom...Khalsa Baagi Ja Baadshah...
Nanak Naam Chardhi Kallah Tere Bhaneh Sarbat Da Bhala..

Khalistan: Origins of a Nation Episode 4