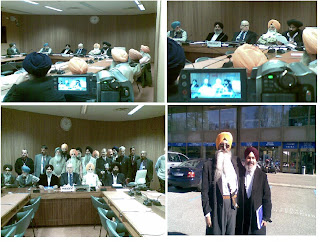 Geneva, UN - Sikh representative went to U.N Geneva on the 13th of March 2008 to highlight the issue of Sikhs nation in Indian union and the human right abuses within the union.This program was organized by Pritpal Singh Khalsa (Switzerland) of Dal Khalsa. The briefing was chaired by Mr. Charles Graves of the UN Human Rights Council.It was attended by representatives of many freedom seeking nations within union state of India.Representatives from Kashmir,Assam,Christians from orissa and Sikhs.


* Human right abuse of all minorities in India.

From Massacre of Sikhs in India in 1984 to Massacre Muslims in Gujarat 2002 to the on going attacks on Christians. This is the patten of how attack on minorities takes place with state support.

· Events are created or used to carry out the ethnic cleaning of minorities.

· Mobs are organized and arms and weapons are issue to them. Including small fire arms, hang guns and small machine guns, swords, metal rods, petrol etc.

· Transport are arranged for the mobs and they are driven to their destinations.

· Shops ,Houses and place of worship belonging to a minority are targeted , looted and burnt.

· Men,women,elderly and children belonging to a minority are targeted and killed

· Women belonging to a minority are gang raped and some died as result of the shock.

. Then media is let back in and it is described to media as riots between minority and Hindus.

In 1986 the Sikhs held an historic Sarbat Khalsa (national gathering) and started to rebuild their supreme seat of Government, the Akal Takht Sahib in Amritsar, destroyed by the Indian Army during the infamous Operation Bluestar in which Punjab was literally sealed off and thousands of Sikhs were brutally massacred. Within days of the full withdrawal of the Indian Army from the Golden Temple Complex, more than 200,000 Sikhs had taken part in an extraordinary show of ‘people power’, not only to rebuild their sacred seat of power but their very destiny as a free Nation. It resolved unequivocally that the Sikh Nation would establish an independent sovereign Sikh state of Khalistan in accordance with their inalienable right of self determination as enshrined in international law.

* Call for Indian unions democratic status to be reviewed.

India is an un-democratic country run by fascist hindutava regime.The world in fact needs to look no further than India's constitution to understand that this is a state unworthy of a place at the international top table. Articles 25 of that constitution, defines Sikhs (along with Buddists and Jains) as "Hindus" for the purposes of the constitution and the associated legislation that governs personal law, religious places of worship. In giving effect to the provisions the Indian Supreme Court, seemingly without any apparent sense of embarrassment, opined in 2005 as follows:

"The so-called minority communities like Sikhs and Jains were not treated as national minorities at the time of framing the Constitution. Sikhs and Jains, in fact, have throughout been treated as part of the wider Hindu community which has different sects, sub-sects, faiths, modes of worship and religious philosophies. In various codified customary laws like Hindu Marriage Act, Hindu Succession Act, Hindu Adoption and Maintenance Act and other laws of pre and post-Constitution period, definition of 'Hindu' included all sects, sub-sects of Hindu religions including Sikhs and Jains."

Caste system is also inshrine in this constitution.Caste System is not just Racism, but it is much more Vicious, Venomous, Evil and Cruel; Caste System is Racism, Fascism and Nazism

It has been frequently written about these days and even the so-called intellectuals and the social scientists in CASTE INDIA keep saying with absolute arrogance that 'The Caste System cannot be clubbed with Racism because Caste System is not Racism and also this is the "internal problem of India" and therefore the world community cannot and should not discuss the Hindu Caste System in "The United Nations Conference Against Racism, Racial Discrimination, Xenophobia and Related Intolerance to be held in Durban, South Africa during August 28 and September 1, 2001". This only shows how much these so-called Hindu intellectuals and social scientists are immersed in the evil teachings of HINDU SATANIC CULT and thus adamantly adhere to the appalling intellectual dishonesty. They are such intellectual prostitutes by their conspiracy of deafening silence always maintain that they are ready and willing to prostitute their so-called intelligence to protect their ill-gotten benefits out of an unique Hindu evil and inhuman system of dreadful and grisly Caste System. By maintaining iron-fisted arrogance of upholding this evil Caste System, the venomous manifestation of the barbarous Hindu Satanic Cult, these evil Hindu creatures want the perpetuation and the continuation of the most heinous and unspeakable vicious crimes, atrocities, and abuses against humanity at any cost. And the most heinous and ferocious practice of untouchability that is being imposed on the desperately innocent citizens of Caste India by the EVIL CASTE SYSTEM of the barbarous Hindu Satanic Cult is the daily occurrence in Caste India at free will and at ease. 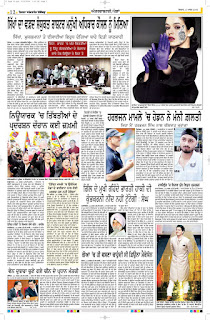