Floats carrying Khalistani banners and photos of Sikh Martyrs were seen everywhere
It was Khalistan all the way....

Fatehgarh Sahib: (May 12, 2010): On May 12, Khalistanis made their presence felt on the streets of Panjab during a parade to observe the tercentenary of Sikh rule established by Baba Banda Singh Bahadur in 1710.

Pro-Khalistan slogans were also raised at the Khalsa Raj Parade organized by the Dal Khalsa to mark the tercentenary of first Sikh rule established by Sikh warrior Baba Banda Singh Bahadur. Hardliners and family members of slain militants in large numbers participated in the parade, which started from Chaparchiri and concluded at Sirhind in the evening.
Floats carrying Khalistani banners and photos of Sikh Martyrs were a source of attraction.

A large size poster of Dal Khalsa’s mentor Gajinder Singh, whose names figures in India's 20 most wanted persons, was distributed amongst masses all the way. The message on the float having pictures of Sikh Martyrs was - 'Sikh Martyrs last will: Khalistan'.Just as in Nagar Kirtans in the UK in which Dal Khalsa UK distributed T Shirts of Shaheed Sant Bhindranwale most of the young participants were wearing Bhindrawale’s T-shirts.

The Parade was organized by Dal Khalsa with the support of SAD (Panch Pardani), Khalsa Action Committee, Sikh Students Federation and UK based Council of Khalistan & Dal Khalsa UK

On reaching at Fatehgarh Sahib, the organizers unfurled, saluted and paid respect to the Sikh Flag, which symbolizes Sikh sovereignty.

In his address, S Harcharnjit Singh Dhami, the president of the Dal Khalsa said Baba Banda Singh Bahadur was a true Sikh warrior who fought against injustice and slavery.

“This is a historic moment. We have gathered here today to reaffirm that Sikhs as a Nation have been struggling for their freedom against all odds, refusing to submit to those who aim to eliminate their identity and crush their rightful aspirations”.

By unfurling and saluting the Sikh Flag, we are keeping alive the memory and dedication of all those martyrs who laid down their lives to establish the sovereign self rule for Sikhs in the recent times”, he pointed out in a emotional tone and tenor.

Spelling out his party’s agenda, he said we were fully convinced that the future of our people lies in seeking and obtaining the right to self-determination.

Bhai Mohkam Singh while addressing the spirited gathering of Dal Khalsa activists lambasted the present leadership for not adhering to Sikh principles and traditions.

Harpal Singh Cheema, leader of SAD (Panch Pardani) took Akalis to task for creating hurdles in establishing the Khalsa rule. The gathering called upon the Sikh masses to recognize and reject that leadership who for their personal benefits are damaging the collective cause of the Sikh nation.

Kanwar Pal Singh while addressing the gathering expressed concern and displeasure on the unsavory situation arisen after Prime Minister raised the issue of rising activities of Sikhs in Canada with his counterpart Stephen Harper in Washington in April. Since then the Canadian Sikhs are passing through a phase of turmoil, uncertainty and suspicion, he said.

He said that Dr Manmohan Singh’s unnecessary intervention in the internal affairs of Canada and his portraying the Sikhs over there in poor light was condemnable.

The organizers called upon the energetic Sikh individuals and groups especially Council of Khalistan (UK), Khalistan Affairs Centre (USA), World Sikh Organization (Canada) and other world bodies to lobby for the associate membership for Sikh Nation in the UN.

The Khalsa March in support of Khalistan in Panjab demonstrates that Sikhs are united in the face of State Sponsored Terrorism and Genocide by India's fanatical Hindutva Govts and no force of India can crush the spirit of Freedom and Self Determination in the form of Khalistan! 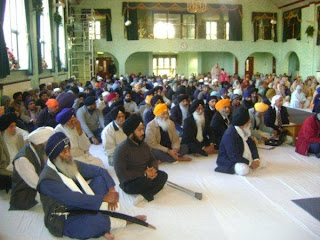 UK (Birmingham), Sunday 9th May 2010: An array of Sikh organisations has, while marking key historical anniversaries relating to Sikh sovereign rule, delivered an uncompromising message to India reaffirming their commitment to once again liberate the Sikh homeland, and to maintain friendly relations with China and Pakistan in order to protect the territory in the event of war in South Asia. They said the Sikhs would never again save India and suggested that the Indian army reconsider its foolish claim to be able to bring its neighbours to their knees within 96 hours.
The 300th anniversary of the first sovereign Sikh state, founded in May 1710, by Banda Singh Bahadur falls this week and the Sikh national hero’s achievements were hailed as an inspiration to the current Khalistan struggle. Also commemorated was the Declaration of Khalistan made in 1986, pursuant to the decisions of the Sarbat Khalsa (national gathering), when the Sikhs set out their political goals following India’s notorious armed assault on the Golden Temple in Amritsar in June 1984.
Citing the UN’s own rejection of India’s unlawful ‘reservation’ against the application of the right of self-determination to nations under its occupation, the resolutions adopted at the annual Khalistan Day Conference identified Indian imperialist policies as being the direct cause of bloody conflicts in the sub-continent. It extended support to the Kashmiri and Naga freedom struggles and called on the international community to bring India to book for carrying out genocide against Muslims, Christians and Sikhs in an attempt to suppress legitimate, democratic movements for self-rule.
Referring to a ‘blacklist’ of Indian politicians and security officials to be put before an international criminal tribunal for genocide, the Conference called for the UK Government to start the process by arresting Indian Trade Minister Kamal Nath, who is speaking at a public function in London on 12 May 2010. Nath has been identified in credible witness testimony as being personally involved in the massacres of Sikhs in Delhi in November 1984, in which some 20,000 Sikhs were brutally murdered in three days of pogroms. He has not been prosecuted by any Indian court, despite 25 years of efforts by human rights defenders in India to hold him to account for his alleged war crimes.
Barrister Sultan Mahmood, former prime Minister of Azad Kashmir, spoke of the need for Sikhs and Kashmiris to form an effective diplomatic front to expose Indian imperialism on the global stage. He said liberation of Khalistan and Kashmir would bring massive peace and security dividends in South Asia, which the international community cannot afford to ignore. A message from the Government of Nagalim’s Foreign Minister, Rh. Raising, was delivered by Peter Davis (Naga Support group, UK) and referred to India as “the same force that tried to completely destroy Khalistan is doing the same to the Nagas today”. It went on to say “We strongly believe that the people of Khalistan have every right to determine their future for themselves. To this effect the sole authority lies with the people of Khalistan and not with India”.
In a reference to recent remarks by India’s Home Minister PV Chidambram , Amrik Singh Sahota, OBE, President of the Council of Khalistan, which organised the event in conjunction with Dal Khalsa, invited Chidambaram to recognise that sovereignty is hardwired in to the Sikh psyche and that he would do better to come to the negotiating table rather than issue futile requests through the media for Sikhs to abandon the freedom struggle. Other Sikhs speakers included Manmohan Singh and Gurcharan Singh(Dal Khalsa), Gurmej Singh Gill (Khalistan Govt in Excile), Sukvinder Singh (Sikh Federation, UK), Santokh Singh Saran (Akali Dal, Amritsar),Kashmir Singh (British Sikh Federation) and, by telephone link, Kanwarpal Singh (Dal Khalsa in Punjab, which is holding a freedom march in the Sikh homeland on 12 May).
In a message, Lord Ahmed noted how his support for Khalistan has led to India refusing him a Visa; he said a true democracy would allow political dissent and encouraged the Sikh to remain steadfast by democratically pursuing their international rights. In his message, recently re-elected Khaled Mahmood, MP backed the Sikh right of self-determination and supported the establishment of criminal tribunals to punish Sikh genocide perpetrators.

The organization will undertake a Khalsa Raj Parade from Chaparchiri to Sirhind to mark the tercentenary of Baba Banda Singh Bahadur, the first Sikh warrior who is credited with establishing the sovereign Sikh rule on May 12.

Addressing the media persons, the party head H S Dhami and spokesperson Kanwarpal Singh said jatha of hundreds of Sikh youths on vehicles and motorcycles would start from the place Baba Banda Singh defeated and killed the Governor of Sirhind Wazir Khan to end his tyrannical rule. “The march would conclude at Sirhind where Baba Banda Singh unfurled the Saffron Nishan Sahib and established the first rule of Sikhs”.

Courting a new controversy, they called the former chief minister Beant Singh as modern day Wazir Khan in whose regime killings of Sikh youth were order of the day. They said Dilawar Singh assassinated him to end his tyrannical rule in Punjab. Hence, they would honour Dilawar Singh, a martyr with ‘Baba Banda Singh Bahadur Bravery Award’.

Elaborating the plans of the function, they said and a simple ceremony would be performed to salute the Sikh flag. They said that families of those whose kin and kith contributed in the recent Sikh struggle would also participate in the march. They said representatives of Khalsa Action Committee, SAD (Panch Pardani), Sikh Students Federation, Sikh Youth of Punjab and Shiromani Khalsa Panchayat would also be part of the function. They said the function has a support of UK based Council of Khalistan also.

The Parade will bolster the morale of the youth who have gone astray from Sikh religious ethos, they said. “It would also be a befitting reply to all those forces and individuals who had been attempting to project Baba Banda Singh Bahadur as “Bairagi” to drag him into Hindu fold”.

They criticized the Akali leadership for inviting BJP and Congress leadership in celebrating the tercentenary celebrations. To invite and share dais with those who were deadly against the concept and ideology of Sikh rule was ridiculous and against the collective aspirations of the community.

An international conference by Council of Khalistan and Dal Khalsa (UK unit) will also be jointly organized on May 9 at Birmingham (UK) gurdwara to mark the tercentenary of Sikh rule, they added.