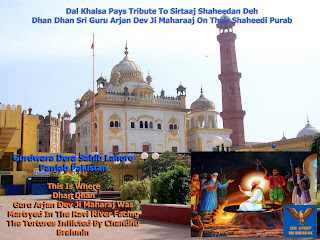 Dhan Dhan Sri Guru Arjan Dev Ji Maharaj ,Who On This Day Attained Shaheedi Due To The
Treachery Of The Brahmin Chandhu - The Tradition Of Brahmin Backstabbing
Continues To This Day - With Hindu India Commiting Genocide On Sikhs & The Hindu Fanatics Like RSS Destroying The Sikh Nation &
Sikhism

Text Of The Memorandum delivered during the Sikh Freedom & Remembrance Rally Sunday 13th June 2010 below:

Britain, India and the Sikh Nation: “Special Relationship” or “Indebtedness”?

It was your illustrious predecessor Winston Churchill who spoke of Britain’s relationship with the Sikhs in the following terms:

“British people are highly indebted and obliged to Sikhs for a long time.

I know that within this century we needed their help twice and they did help us very well.

As a result of their timely help, we are today able to live with honour, dignity, and independence”.

Sikhs have, for several years, called for British assistance in the Sikh Nation’s hour of need – when our own honour, dignity and independence are at stake. The Indo-Sikh conflict of recent decades has seen the Sikhs suffer genocide and the denial of freedom by force; the conflict remains unresolved and many of those guilty of inhuman crimes against the Sikhs remain unpunished, holding high profile positions of power in India. Today, marking the 26th anniversary of the notorious Indian army attack on the Golden Temple in Amritsar in June 1984, the UK’s Sikhs have once again gathered in London in their thousands to renew that call for British (and wider international) intervention. We hope that, in line with Churchill’s analysis, your Government takes up the grave issues we raise and discharges the debt of history.

The coalition Government has already set itself a declared objective to establish a “new special relationship” with India, but it appears that such a policy risks ignoring the massive injustices and human rights abuses that the Indian state has heaped on the Sikhs since that bloody episode in 1984. We attach to this Memorandum the document we delivered to Prime Minister Gordon Brown on 7th June last year which sets out the level and nature of the oppression, the underlying causes of the conflict in Punjab and how we believe it should be peaceably resolved in accordance with international law. It includes specific recommendations for UK Government foreign policy, including effective action against genocide perpetrators and for helping the Sikhs exercise their right of self-determination in the Sikh homeland. Perhaps as a result of wider political drift the previous administration did not respond effectively to our calls for action.

Your Government has the opportunity to look afresh at these concerns and we respectfully urge that this is done at the earliest opportunity. We would ask for a meeting with the relevant minister at the Foreign Office to discuss this area of policy, which is of great concern to Britain’s 700,000 strong Sikh community. Both constituent parties of the coalition promised a new politics where Government engages with the people; UK Sikhs see this as a timely change of approach as, unfortunately, Foreign Office officials have over recent months declined to engage with us when we have raised important and urgent issues. These include provocative visits to the UK by those widely alleged to have directed the anti-Sikh pogroms in Delhi in November 1984, in which some 20,000 Sikhs were brutally killed in three days of state sponsored genocide. Ahead of such a meeting we would however ask that you at the outset consider some key areas where your Government can make an immediate impact.

The coalition programme continues the previous Government’s stand in support of India’s inclusion in the UN Security Council as a permanent member. In the light of India’s appalling record on human rights; its refusal to sign the Nuclear Non-Proliferation Treaty whilst creating a nuclear arms race in South Asia; its formal rejection (in defiance of an official UN reprimand) of the applicability of self-determination to the peoples living within territory it controls, we are bound to point out that this is, in our view, a serious mistake. Until India complies with basic international standards and accepts the rule of international law, it seems bizarre to reward it with such a prize and indeed to allow it the very means to ‘veto’ any future international action aimed at bringing it in to line. Churchill’s political acumen seems to be sorely missing; it s inconceivable that he would advocate such terms for a belligerent aggressor which threatens its own people as well as international peace and security.

The US Commission on International Religious freedom recently put India on its ‘watch list’ of states where religious minorities suffer mass violence and where the state is either a mute spectator or actively involved. Christians, Muslims and Sikhs have been subjected to mob violence, directed by politicians of both the major Congress and BJP parties, and yet there is never any redress. The mass killings of Sikhs in November 1984 in Delhi are a classic example and no objective commentator can, after 26 years of failure in the Indian judicial system, can realistically hope that justice will be delivered by the Indian courts. It is time that the perpetrators be tried in international courts and we would suggest that the UK formally raise this ahead of the Commonwealth Games scheduled to be held in Delhi in October of this year, at which Sikhs will be protesting in large numbers. If the Indians refuse international intervention we believe Britain should call for a boycott of the Games.

In addition, Britain should either deny entry to the UK of those accused of genocide or, if they arrive, take unilateral action to prosecute them. It is revealing that Canada has recently denied Visas to Indian security personnel on the grounds that they were involved in the massive abuses in Punjab. The Canadian embassy in Delhi wrote to one of the persons concerned stating that

“As per open source research, the BSF is a violent paramilitary unit stationed in the areas that the government

of India considers to be sensitive. The BSF has engaged in systematic attacks on civilians ... You have admitted

that you disassociated yourself from them and remained with the organization for 25 years ...”

Given this robust approach by the Canadians, Britain’s Sikhs wonder why people like Sajjan Kumar and Kamal Nath (both identified in official enquiries and witness testimony as being involved in the Delhi pogroms) are allowed entry in to the UK. We have a formal response from the Foreign Office, dated 17 May 2010, which states that as far as the UK Government is concerned, they can come and go as they please. This is, we submit, an untenable position and needs to be reconsidered.

The British Government’s international aid budget is to remain unchanged, despite the economic downturn, and the sentiment behind that is commendable. We do however believe that there is a case for re-allocating the hundreds of millions of pounds given every year to India, which is by far the biggest recipient of UK taxpayer’s money in comparison to other donee countries. As UK tax payers, British Sikhs object to funding a country which has a massive (and increasing) defence budget, which is being used to arm repressive internal security forces as well as to build a nuclear arsenal – both of which threaten Sikh populations and territory in Punjab. It is appropriate at this time to send a signal to India that aid must be contingent on compliance with human rights and we call on the British to stop that aid until, for example, India releases all Sikh political prisoners. The police have in recent months rounded up several Sikh leaders in Punjab and falsely implicated them on terrorism charges, whereas it is clear to all that there is no basis to those charges.

Ultimately, the solution to the conflict in Punjab will lie in the exercise of self-determination by the Sikhs, in accordance with international law, by which means the Sikhs will be able to protect themselves, their natural resources and their “honour, dignity and independence”. We see that outcome, together with a resolution of the Kashmir conflict, as a real answer to the instability in the region where UK forces are already committed on an increasingly unpopular mission. We are committed to peaceably establishing an independent sovereign state of Khalistan in the Sikh homeland and hope that, over time, UK foreign policy can align itself, not only with with Churchill’s thinking about the Anglo-Sikh relationship, but also with the coalition’s espousal of “freedom, fairness and responsibility”.

We wish your Government every success and look forward to hearing from you.

(the representatives of the UK Sikh groups comprising the Federation of Sikh Organisations, UK)