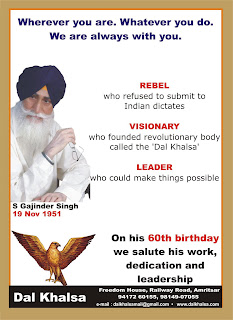 TODAY IS THE 60TH BIRTHDAY OF SARDAR GAJINDER SINGH JI FOUNDER MEMBER OF DAL KHALSA INTERNATIONAL,BHAI SAHIB HAS BEEN LIVING IN EXILE FOR 30 YEARS,BHAI SAHIB IS A REVOLUTIONARY SIKH LEADER AND STATESMAN WITH A VISION BHAI SAHIB HIJACKED A PLANE IN PROTEST OF THE ARREST OF SHAHEED SANT BHINDRANWALE & OPPRESSION OF SIKHS & SUBSEQUENTLY HAS DEDICATED HIS ENTIRE LIFE TO THE FREEDOM OF THE SIKH NATION - KHALISTAN,FROM A VERY EARLY AGE THROUGH TO THE FOUNDING OF DAL KHALSA BHAI SAHIB USED TO WRITE ICONIC POEMS REMINDING SIKHS OF THE NEED FOR FREEDOM & THEIR GLORIOUS HISTORY A MAN WITH A VISION WELL AHEAD OF HIS TIME - ITS TIME HE WAS GIVEN THE DUE RECOGNITION HE DESERVES BY THE SIKH NATION - SARDAR GAJINDER SINGH A REVOLUTIONIST,SAINT SOLDIER,POET,VISIONARY,A LIVING SHAHEED...WE WISH HIM A VERY HAPPY BIRTHDAY ...REPOST THIS PIC ON YOUR WALLS/PAGES/GROUPS AND TELL THE STORY OF A SIKH HERO WHO HAS GIVEN HIS ENTIRE LIFE FOR THE SIKH NATION

SHOCKING NEW FOOTAGE HAS EMERGED OF THE ATTACK BY HINDU TERRORISTS OF THE RSS/BJP/POLICE ON SIKHS IN AMRITSAR SHOWING SIKHS BEING BEATEN,MANHANDLED,THROTTLED,SWORN AT AFTER HAVING THEIR TURBANS REMOVED ATTEMPTS TO REMOVE THE KIRPANS WERE ALSO MADE AFTER WHICH THE HINDU TERRORISTS SHOUT 'BHARAT MATA KI JAI' - THE ELDERLY SIKH IN THE VIDEO STOOD HIS GROUND AS A SAINT SOLDIER OF THE SRI GURU GOBIND SINGH JI,TOWARDS THE END OF THE VIDEO YOU CAN SEE AN UNCONSCIOUS SIKH BEING DRAGGED WITH HIS TURBAN REMOVED AND HAIR OPENED - THIS IS ANOTHER EXAMPLE OF WHAT THE SO CALLED HUMAN RIGHTS WE SIKHS HAVE IN INDIA,HINDU TERRORISTS LIKE ADVANI WHO THE PROTEST WAS AGAINST CAN SAY WHAT THEY LIKE AND PROMOTE THE NAZI IDEA OF HINDUTVA A PURE RACE OF HINDI,HINDU,HINDUSTAN BUT SIKHS CAN'T EVEN STAND UP TO DEFEND THEIR BASIC HUMAN RIGHTS,RELIGION,OR PANJAB. DARK TIMES ARE IN STORE FOR THE SIKH NATION AND PANJAB IN THE COMING MONTHS/DAYS/WEEKS WE ALL NEED TO DO OUR BIT TO CREATE AWARENESS,POST THIS VIDEO AND THE OTHERS TO YOUR FACEBOOK WALLS/PAGES/GROUPS & TO YOUR FRIENDS/FAMILY

A DAY AFTER SIKHS WERE ATTACKED & BEATEN BY HINDU TERRORISTS OF THE RSS/BJP HINDUTVA TERROR GROUPS L.K ADVANI THEIR LEADER VISITED SRI HARMANDAR SAHIB - LIKE HITLER VISITING A JERSUSALEM SYNAGOGUE SIKHS PROTESTED AGAINST HIS VISIT & SHOUTS OF ADVANI MURDABAD KHALISTAN ZINDABAD WERE HEARD THROUGHOUT THE GOLDEN TEMPLE COMPLEX - THE GRANTHI REFUSED TO GIVE HIM A SIROPA BUT TRAITOR NAVJOT SIDHU UNDER BADAL REPORTEDLY GAVE ONE TO HIM IN PRIVATE TO PLEASE THE FANATIC ADVANI WAS THE VERY MAN WHO ENCOURAGED INDIRA GANDHI TO ATTACK SRI HARMANDAR SAHIB IN 1984 AFTER WHICH HE GAVE OUT LADDOOS AND EVEN ALCOHOL TO CELEBRATE,THIS MAN ALSO LED THE CHARGE TO DESTROY THE BABRI MASJID - ADVANI RACIST FANATICAL HINDUTVA TERRORIST WHO ONLY WANTS HINDI,HINDU,HINDUSTAN EVERYONE ELSE SHOULD EITHER ASSIMILATE OR BE WIPED OUT - DARK TIME ARE AHEAD FOR PANJAB AND THE SIKH NATION WE ALL NEED TO BE PREPARED AND ALERT PLEASE POST THE VIDEOS OF THE LAST FEW DAYS ON YOUR WALLS/PAGES/GROUPS - UNITED WE STAND

THIS SHOCKING FOOTAGE SHOWS HINDUTVA TERRORISTS ATTACKING SIKHS,UNTIL THEY ARE UNCONSCIOUS AFTER WHICH THEY SHOUT 'BHARAT MATA KI JAI' THE SIKHS WERE THEN DRAGGED TO MAKESHIFT JAILS AND CAGED LIKE ANIMALS,THE POLICE EVEN DEMANDED THEY REMOVE THEIR KIRPANS,THEY HAD ALREADY REMOVED THEIR TURBANS - THE SIKHS WERE PEACEFULLY PROTESTING AGAINST THE VISIT OF ANTI SIKH HINDUTVA FANATICS OF THE BJP/RSS & THEIR LEADER L.K ADVANDI WHO IS VENOMOUSLY ANTI SIKH HE EVEN BRAGS IN HIS BOOK 'MY COUNTRY MY LIFE' THAT HE EGGED IN INDIRA GANDHI TO ATTACK THE GOLDEN TEMPLE & CARRY OUT THE SIKH GENOCIDE IN 1984 - AND SAID IT SHOULD HAVE BEEN ATTACKED 6 MONTHS BEFORE THE ACTUAL TERRORIST ASSAULT ON SIKHISM'S HOLIEST SHRINE - HARSIMRAT BADAL - THE DAUGHTER IN LAW OF PARKASH BADAL EVEN CHANGED THE 'FATEH' TO 'WAHEGURU JI KA KHALSA WAHGEURU JI KI JAI' - TO IMPRESS THE HINDU TERRORISTS - DARK TIMES ARE AHEAD FOR PANJAB AND THE SIKH NATION.SIKHS HAVE NO RIGHTS,OR EVEN A VOICE IN INDIA - THIS IS ANOTHER EXAMPLE OF HOW WE ARE BEING ATTACKED DAILY ,1ST AN ATTEMPTED ATTACK ON JAGTAR SINGH HAWARA,THEN HINDU TERRORISTS OFFER CASH REWARDS FOR SIKH HEADS AND NOW THIS ! INDIA IS NO DEMOCRACY, IT IS A TERRORIST STATE WHICH GIVES MINORITIES NO RIGHTS!

In welcoming right-wing Hindu terrorists of the Bhartya Janta Party (BJP) and Vishav Hindu Parishad (BJP), the Badal Regime systematically silenced all opposition protests in which cherished Sikh dastar of the young and old was desecrated openly by the security forces.

The Akali Government, who is in alliance with the right-wing BJP, and the snatanist Sant-Samaj in the upcoming state elections, openly welcomed the Hindu Terrorist leader LK Advani's 'Rath Yatra' to Punjab. Advani is infamous for having approved and celebrated the 1984 invasion of Sri Darbar Sahib that killed thousands of innocents Sikhs and caused the destruction of Sri Akal Takht Sahib.

While Akali Dal Amritsar and Sikh Student Federation activists were being kicked and beaten by the security forces, their dastars thrown on the ground like trash, shameless Sant Smajists, the self-styled babas who have been fleecing the Sikh nation for decades, were holding closed room meetings with Badal Dal representatives in hopes of reserving as many seat as possible for the upcoming Punjab Assembly elections.

Not a peep was heard from these charlatans or the Takht Jathedars in regards to the desecration of the sacred Sikh dastar by the Badal Junta. The Old and Young Beaten Humiliated by the Security Forces

With their Dastars Removed, the Protestors were publicly paraded bare-headed and then locked up in temporary Jail Cells 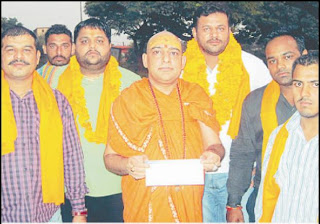 **BREAKING NEWS** HINDUTVA LEADERS OF THE HINDU SURAKHYA SAMITI,RSS,SHIVESENA OFFER A CASH REWARD FOR THE HEADS OF ANY SIKHS WHO 'SPEAK FOR FREEDOM' THESE FANATICAL BHAMANS ARE DOING THIS OPENLY IN FRONT OF THE PRESS/MEDIA IN PANJAB & YET NO POLICE ACTION IS TAKEN AGAINST THESE HINDU TERRORISTS,IT BRINGS BACK MEMORIES OF THE DAYS WHEN THE MOUGAL REGIME ALONG WITH THE BHAMAN KINGS USED TO OFFER CASH REWARDS FOR THE HEADS OF SIKHS - TODAY IN 2011 THEY ARE CHALLENGING THE SIKHS IN THEIR OWN HOMELAND & OPENLY THREATENING TO KILL US & ARE OFFERING INCENTIVES TO ANYONE WHO DOES....THE SIKH NATION NEEDS TO WAKE UP WE ARE SAINT-SOLDIERS & WE CANNOT ALLOW THESE TERRORISTS TO INTIMIDATE US OR SIKH GIRLS/WOMEN AS THEY HAVE BEEN RECENTLY DOING ACROSS PANJAB ...WAKE UP ! WE WARN THE SIKH NATION IN THE COMING MONTHS DARK TIMES ARE AHEAD FOR PANJAB & WE ALL NEED TO DO OUT BIT TO BE PREPARED FOR ANYTHING....TODAY THEY ARE OFFERING CASH FOR HEADS TOMORROW THEY WILL GO FURTHER...

WE SALUTE THE SHAHEEDI OF SHAHEED BABA DEEP SINGH JI