Hoshiarpur- The office bearers of the Dal Khalsa today reiterated their party agenda to make Panjab as an independent state - Khalistan, to protect the exclusive and separate identity of Sikhs and to take Panjab economically and politically forward.

The meeting today gave a clarion call to the people of the state to observe August 15 as black day and stay away from celebrations.

To mark their protest, the members of the organization have decided to stage a peaceful sit-in on India's 63rd Independence Day at Amritsar for 3 hours. To convey their message, they would carry black flags and placards in their hands.

A grave injustice is being done to Punjab by the successive union governments', said party president Harchranjit Singh Dhami, who was flanked by party senior leaders including Satnam Singh and Kanwarpal Singh.

Addressing the press conference, Mr Dhami said the feeling of oneness for this country has been lost. Tens of thousands have been killed or butchered. The Sikhs have realized that the pursuit of justice (referring to Nov 84 genocide) in this country was an illusion as the (Indian) state is complicit in the violence.

In the present times, the biggest concerns that bother the people of the state most is the continued loot of Panjab's water wealth resources followed by the continuation of influx of migrants to Punjab. The government is pursuing deliberate policy of reducing the Sikhs in minority in their own Homeland.

Explaining their rationale behind giving the call to observe August 15 as 'black day', they said guns have felt silent since 1995 but not a single substantive issue of the Punjab has been resolved for which its people witnessed bloodshed for two decades. The Panjab militancy that started in 1978 continued for the next 17 years. Ironically, New Delhi found police solution to Panjab problem. Still, there are people over there who are in denial about the problem.

Concerned over the seizure of arms and ammunitions from the scores of arrested Sikh youth since last one year, Mr Dhami said it's an indicator of the undercurrents of the situation reverting back to earlier days of militancy of 90's. The Punjab problem will continue to resurface till it is addressed and genuine aspirations of the people are met.

Although Indian leadership has engaged rebel leaders in Nagaland, Kashmir, Assam for talks, but ironically for them, there's exists no Punjab problem.

Dal Khalsa UK once again sends a clear message to all Sikhs that August 15th is not independence day for any Sikh of Panjab its Independence day for India and the Hindus who celebrate it.1984 and the 1984 Genocide in which our very way of life was attacked showed us that without sovreign rule KHALISTAN we cannot survive as a nation.

**Sikhs will gather On 15th Aug 2010 alongside Kashmiris,Tamils & Other Oppressed Nations To Protest Outside The Indian Embassy In London ALL SIKHS ARE ASKED TO ATTEND,To Show India We Are United For Freedom Of Khalistan & Fellow Oppressed Nations**

This is an open call to all to come and support this demonstration that will take place outside the Indian High Commission on the 15th of August 2010 which will coincide with the 63rd Indian Independence day!

Let this be the occasion where we can let the Indian Establishment know that so many minorities in Indian are not satisfied with the way they have been treated in "Independent India" which calls itself the world's largest "d...emocracy".

Support for the following communities has been attained -

Postal Address of the High Commission of India in London is:

Location: Adjacent to Bush House (BBC World Services Office) and opposite to the Waldorf Hotel.

This event is open to all communities, and is not just limited to the Sikhs.

Our aim should be to bring as many people with us as possible to highlight the plight of the oppressed nations who are being occupied by India,through force. 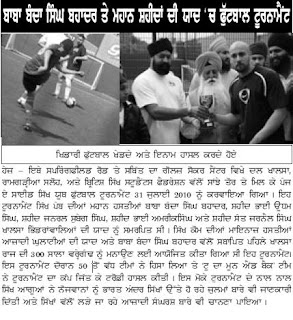