WE BOW OUR HEADS TO DHAN DHAN SRI GURU ARJAN DEV JI MAHARAJ SHAHEEDAN DEH SIRTAJ ON THEIR SHAHEEDI DIVAS - GURU SAHIB ATTAINED SHAHEEDI DUE TO THE TREACHERY OF CHANDHU BHAMAN WHO INFLICTED TORTURE ON GURU SAHIB & ENCOURAGED THE MOUGHALS/JAHANGIR TO DESTROY THE SIKH NATION ,THE BHAMANVAADI TRADITION OF ATTACKING THE SIKH NATION CONTINUES TILL THIS VERY DAY IN THE FORM OF HINDUTVA THE LEGACY OF MARTYRDOM STARTED BY GURU SAHIB HAS CONTINUED EVER SINCE,WITH MILLIONS UPON MILLIONS OF SIKHS FOLLOWING THE PATH THAT GURU SAHIB SHOWED US OF SHAHEEDI/MARTYRDOM/SACRIFICE - KHALISTAN ZINDABAD 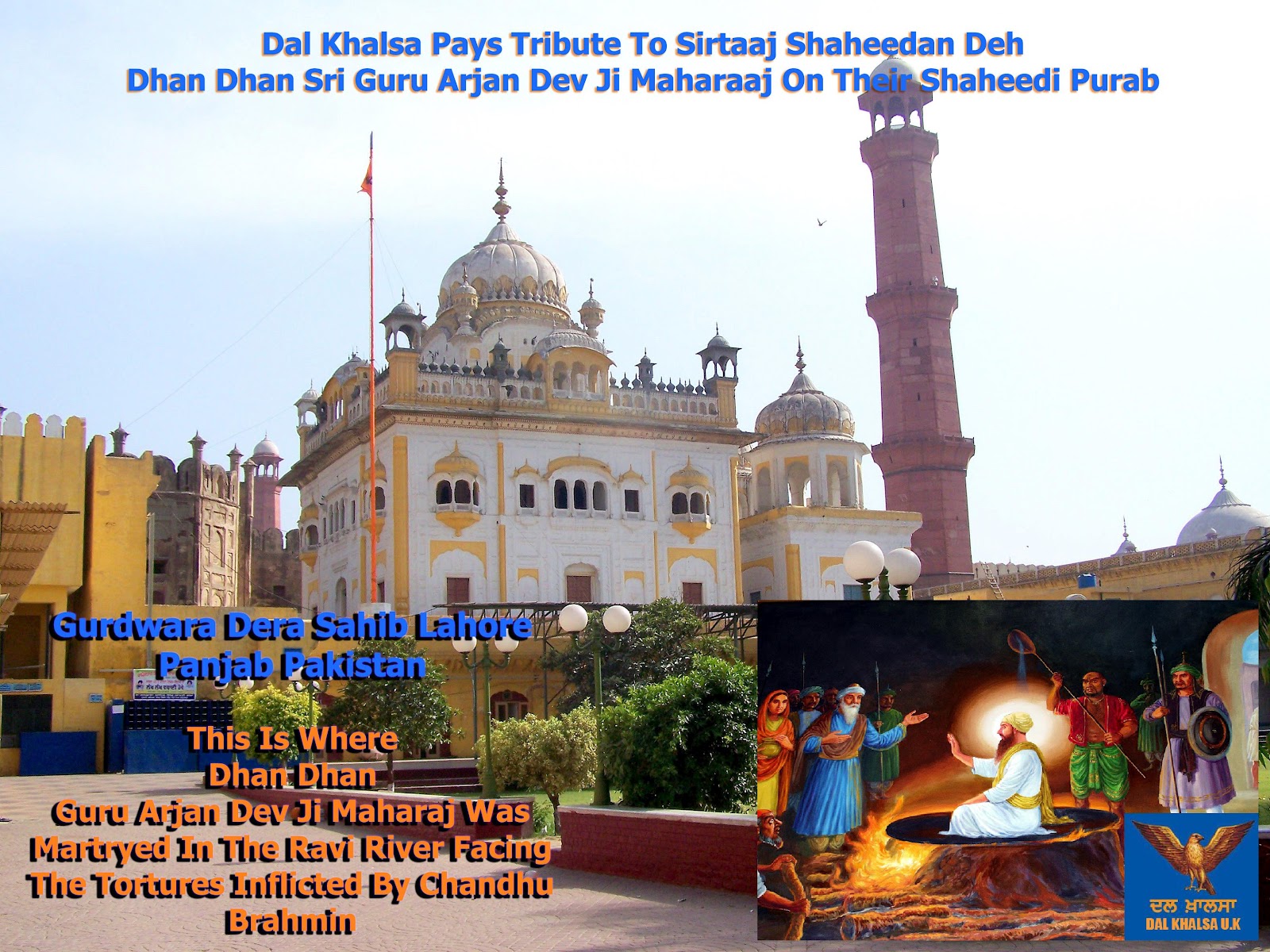 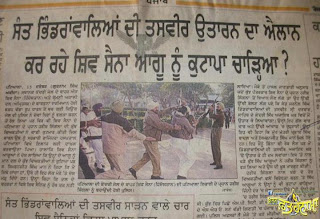 SHIV SENA HINDU TERRORISTS BURN SHAHEED SANT JARNAIL SINGH JI KHALSA BHINDRANWALE'S PIC BUT GET BATTERED AND BEATEN UP FOR DOING SO,THE DAY IS NOT FAR WHEN THE SIKH NATION WILL WIPE THESE TERRORISTS OUT FROM PANJAB

THE NEED FOR KHALISTAN - UNITED SIKH MEDIA CANADA'S MESSAGE TO HARSIMRAT BADAL - PUPPET OF THE HINDUTVA STATE - THE SIKH NATION WILL NEVER BE CRUSHED!


Its the same story every time rdx,ammo and caught in the act.its seems that police always know the game before hand.remember that rdx is the explosive which is the main choice of the Indian army so that an own goal. Indian army personal have been caught staging terror in the union by their own police many time kernal prohit come to mind.these are without any doubt are personals of the Hindu terrorist group raw (rss). they have arrested them to be use as propaganda tool against the Sikhs.


As for the clowns on the internet claiming these to Sikhs activist these are fake ids. strange thing is that Indian media is always trying to manufacture terror and ignoring the real threat.the real threat of Hindu terror. Hindu terror  is always being ignored ,even when they are caught red handed.even making arrest of the Hindu facist is being ignored because of their religious  training and the sensitive nature of the community.

Teens with diabetes is on the rise

The percent of teens with diabetes is on the rise, a new study suggests.Between 1999 and 2008, the percentage of adolescents ages 12 to 19 withdiabetes or prediabetes increased from 9 percent to 23 percent, the study found.Prediabetes is a condition in which blood sugar levels are abnormally high, but not high enough to be classified as diabetes.
The study also found 50 that percent of overweight teens, and 60 percent of obese teens had at least one risk factor for cardiovascular disease, including diabetes, borderline-high or high cholesterol levels or high blood pressure (hypertension).Both diabetes and prediabetes are risk factors for cardiovascular disease, the researchers said.
The findings indicate "U.S. adolescents carry a substantial burden of [cardiovascular disease] risk factors, especially those youth who are overweight or obese," said the researchers from the Centers of Disease Control and Prevention. Studies suggests such risk factors in children can persist into adulthood, the researchers said.
The researchers analyzed information from 3,383 adolescents who participated in a government survey between 1999 and 2008. Participants were interviewed and underwent a physical exam. About one-third were overweight or obese.
Overall, 22 percent of participants had borderline-high or high cholesterol levels, and 15 percent haddiabetes or prediabetes during the study period. About 6 percent had low levels of "good" cholesterol, and 14 percent had pre-hypertension or hypertension.
While the percentage of participants who were overweight or obese did not change significantly over the study period, the percentage of those with prediabetes or diabetes increased 14 percent.
The findings indicate that "a large proportion of teens, regardless of their weight, would benefit from interventions that promote healthy lifestyles, including physical activity and eating a healthy diet," the researchers said.
However, the researchers cautioned that prediabetes and diabetes were diagnosed on the basis of a single blood test, which may not be reliable measure in children.
The study is published in the May 21 issue of the journal Pediatrics.

We protest the G-8 and NATO, but not Bilderberg.  Why?
Do you have to be xenophobic, paranoid, isolationist, or libertarian to protest a secretive gathering of over 100 billionaires, industrialists, media barons, and politicians working to shape our public sphere, or has the left dropped the ball?  Is it time for Occupy to step in?
From May 31 to June 3, 2012, at the Westfields Marriott Washington Dulles Hotel, in Chantilly, Va., the Bilderberg Group is expected to gather behind closed doors.  This exclusive club will rent the entire hotel, encircle it with armed guards, and keep everyone far away, including the media -- except for those special members of the media who will take part but never report a word of what goes on.
Wikipedia calls Bilderberg: "an annual, unofficial, invitation-only conference of approximately 120 to 140 guests from North America and Western Europe, most of whom are people of influence. About one-third are from government and politics, and two-thirds from finance, industry, labour, education and communications. Meetings are closed to the public."
Bilderberg calls itself: "leading citizens on both sides of the Atlantic that Western Europe and North America" who hold "regular, off-the-record discussions" of "common problems - from trade to jobs, from monetary policy to investment, from ecological challenges to the task of promoting international security. . . . There usually are about 120 participants of whom about two-thirds come from Europe and the balance from North America. About one-third is from government and politics, and two-thirds from finance, industry, labour, education and communications."
Does this group of "leading citizens" look representative of the people's interests?
Bilderberg says this was its agenda four years ago:
* Cyber-terrorism * A Nuclear-Free World * Managing Financial Turbulence * US Foreign Policy Without Change * How Serious Are the Threats on Our Economies * Islam in Europe * Africa * Afghanistan, Challenge for the West * Iran-Pakistan * A Look at the Future * The Mounting Threat of Protectionism * Russia * After Bush: The Future of US-EU Relations * Current Affairs: US Elections
Scholars have credited Bilderberg with significant influence in all sorts of disastrous policies from NAFTA to the current push for war with Iran.
One analysis comes from Andrew Kakabadse, a management professor at the UK's Cranfield University:

"There is no conspiracy in Kakabadse's eyes, as Bilderberg has no formal influence whatsoever. 'On the other hand, it has the most tremendous influence since it shapes opinions at the highest levels. Bilderberg is for leaders what the annual medical conference is for doctors. In the latter, certain delegates are more active than others and at some stage the prevailing medical thinking is driven in one particular direction. These regular meetings shape the way the dominant medical theory and practice develops, to the point that the way things are going feels normal and nobody asks for the alternative to the dominant medical paradigms anymore.' The same can be said for world leadership, Kakabadse argues.
"British journalist Jon Ronson, who was invited to a conference by Bilderberg organisers, described the relationship between conference organisers and aspiring political leaders in attendance: 'They'll get an up-and-coming politician who they think may be president or prime minister one day, and as globalist industrialist leaders who believe that politics shouldn't be in the hands of politicians, they try and influence them with wise words in the corridors outside sessions.' Kakabadse calls this process 'smart power'. The shaping of the prevailing opinions amongst the world's leading decision-makers is 'so smart that people don't even know that they are being led', he says. 'In the end, they don't even realise that there are alternative questions to be asked.'"

Is this healthy for democracy?