THIS FAT HINDU TERRORIST SAYS HE WILL WIPE OUT SIKHS & DEMANDS JATHEDAR BHAI BALWANT SINGH JI RAJOANA BE HANGED...GIVE THIS HINDU ATHVADHI TERRORIST SCUM A REPLY..WE ASK ALL TO MAKE VIDEO REPLIES THEY ARE GETTING TOO BRAVE WITH GOVT PROTECTION.

Joining issue with Indian Home Minister Sushilkumar Shinde for objecting to Sikh activists using social media to propagate Khalistan ideology, the Dal Khalsa asked him to explain what was wrong in doing so.
Party spokesperson Kanwar Pal Singh, who was in town to attend the meeting of party workers said the statement by Shinde targeting Sikh youth was meant to terrorize Punjab Hindus and polarize the society in view of impending elections to Parliament.

He pointed out that aspiring for Khalistan through peaceful and political means was neither illegal nor anti-national. He said Supreme Court and High Court in numerous cases have given the ruling that raising the Khalistan issue through peaceful as well as democratic means, was not offence.
He said by directing the state DGP to keep tab on twitter and facebook users, the Home Minister has paved the way for witch-hunting of the Sikhs. The tirade by Home Minister reflects as if Central govt was contemplating to put censorship on social network and deny the Sikhs their right to expression and hold independent belief”. 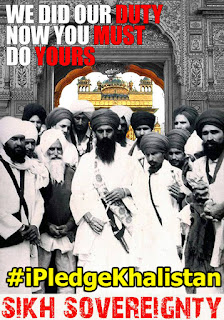 He slammed Shinde for blaming Sikh youth for vitiating the atmosphere of the state. “The Indian government has never tried to redress the vexed issues of Punjab that led to militancy in Punjab. Rather the state has always found police solution to Punjab problem, which was otherwise political in nature, he said.

He said to mark the occasion of martyrdom day of Ninth Master Guru Teg Bahadaur Sahib, their group was holding a Conference on Nov 24 at Hoshiarpur on “Martyrs and Our responsibilities” . He said Panthic personalities would shed light on concept and spirit of martyrdom in Sikhism. 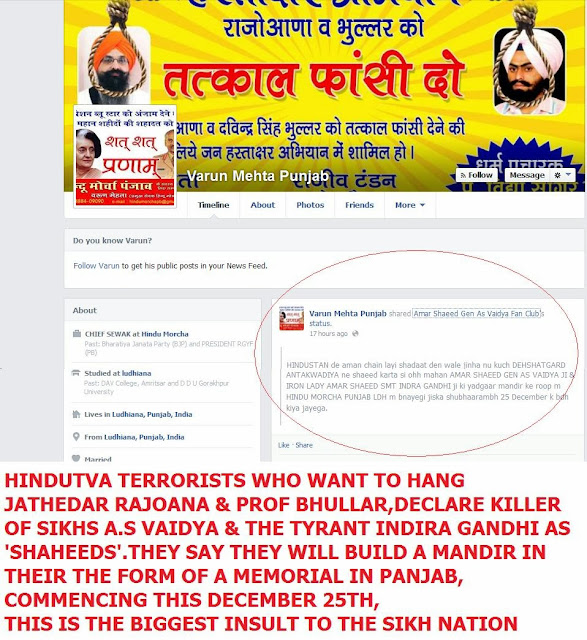 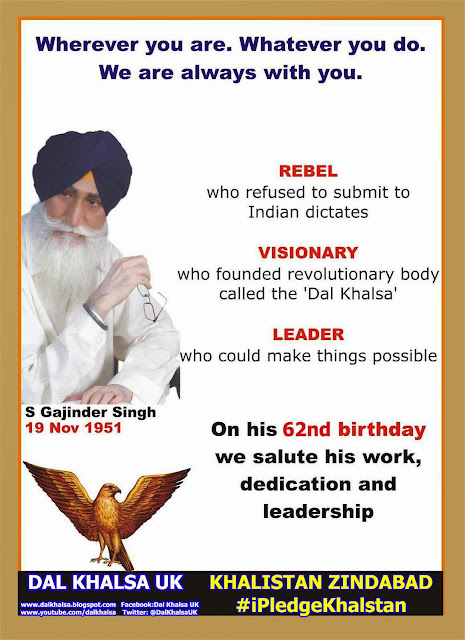 HAPPY BIRTHDAY TO SARDAR GAJINDER SINGH JI TODAY IS THE 62ND BIRTHDAY OF SARDAR GAJINDER SINGH JI FOUNDER MEMBER OF DAL KHALSA INTERNATIONAL,BHAI SAHIB HAS BEEN LIVING IN EXILE FOR OVER 30 YEARS,BHAI SAHIB IS A REVOLUTIONARY SIKH LEADER AND STATESMAN WITH A VISION BHAI SAHIB HIJACKED A PLANE IN PROTEST OF THE ARREST OF SHAHEED SANT BHINDRANWALE & OPPRESSION OF SIKHS & SUBSEQUENTLY HAS DEDICATED HIS ENTIRE LIFE TO THE FREEDOM OF THE SIKH NATION - KHALISTAN,FROM A VERY EARLY AGE THROUGH TO THE FOUNDING OF DAL KHALSA BHAI SAHIB USED TO WRITE ICONIC POEMS REMINDING SIKHS OF THE NEED FOR FREEDOM & THEIR GLORIOUS HISTORY A MAN WITH A VISION WELL AHEAD OF HIS TIME - ITS TIME HE WAS GIVEN THE DUE RECOGNITION HE DESERVES BY THE SIKH NATION - SARDAR GAJINDER SINGH A REVOLUTIONIST,SAINT SOLDIER,POET,VISIONARY,A LIVING SHAHEED...WE WISH HIM A VERY HAPPY BIRTHDAY ...REPOST THIS PIC ON YOUR WALLS/PAGES/TIMELINES & TELL THE STORY OF A SIKH HERO WHO HAS GIVEN HIS ENTIRE LIFE FOR THE SIKH NATION 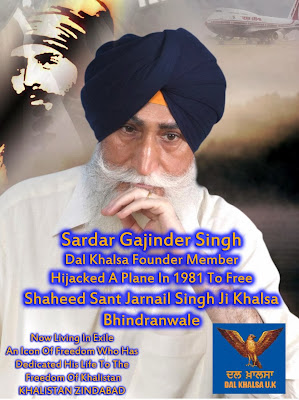 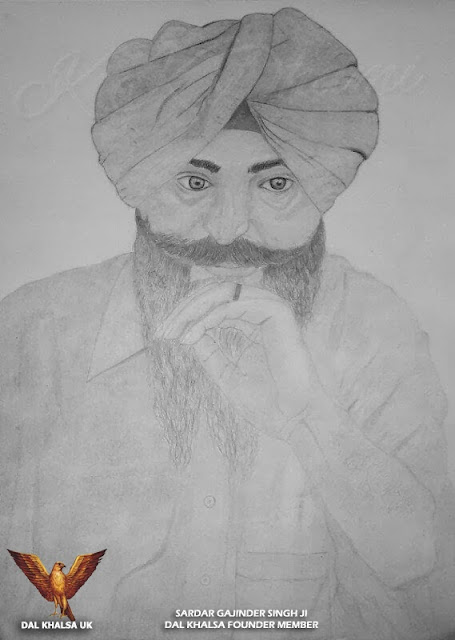