Revolution Records Present "Inqualab" feat. Ranvir Dosanjh, Rayman Bhullar, BattleKATT, Raminder Bhuller, StreetKings & DNA Roadshow releasing April 16th 2010!
‘INQUALAB' is the very first offering from Revolution Records, a new recording house, born out of the desire to see more music that reflects and contributes towards social change. The music produced by Revolution Records, will not be without meaning, instead it will be full of purpose, idea’s, awareness, and of course easy on your ears.

The recent rash of albums, that focus on nothing but, alcohol abuse, casteism, and violence, inspired a group of individuals to come together, to make music, that makes a difference! INQUALAB brings you radical music and thought, that will revolutionize not only your ears, but also your mind.

The album features, Ranvir Dosanjh, an upcoming singer, from Dosanj Kalan, Jalandhar. His recent video for his Bhagat Singh track won fans worldwide, and this is his first album straying from the usual Punjabi formula of alcohol and gun songs. Observing the dire straits Punjab is in right now, he was driven to write lyrics and perform songs that would inspire social change. This album puts him at a new level, in a light that fans are sure to appreciate from him. The album also features Raminder Bhuller, StreetKings, Rayman Bhuller, DNA Roadshow, and BattleKATT.

Click the Below Link For Promos
Read more: http://www.chakdey.com/index.php?option=com_content&task=view&id=1698&Itemid=2#ixzz0lLQVXkaN

The Khalsa Panth is not just a religious body but also a sovereign political entity. Throughout the centuries, the Sikhs have had a unique place among the people of world, developing into a distinct nation in their own right. The concept of sovereignty and statehood is a fundamental part of our very existence.

Resolution to this effect was adopted at a meeting of office bearers held under the leadership of H S Dhami to commemorate birth anniversary of the Khalsa Panth.

The resolution further reads, “Today is our National day. Though British suspended the political sovereignty of the Sikh Nation with the annexation of Punjab in 1849 yet we, the Sikhs, remain a Nation though subjugated. Sikhs as a nation has been struggling for its freedom against all odds, refusing to submit to those who aim to eliminate their identity”. In another resolution the conference demanded commuting of death sentence of Prof Devinder Pal Singh Bhullar and release of all political prisoners including Bhai Daljeet Singh languishing in jails since long.

The Dal Khalsa that traces its roots to Baisakhi incident in which 13 Sikhs were gunned down by neo-Nirankaris in Amritsar 32 years ago, urged Sikh groups to foster unity to achieve the Sikh goal for independence. The president opined that the community that has sacrificed fifty thousand youth can’t abandon its aims and goals half-way.

Reasserting their unique identity, the gathering appealed to Sikhs to reject the imposition of Hindi language, Hindu Marriage Act, Bollywood culture and influx of migrants into the state which if not checked would reduce the Sikhs to a minority in their own homeland and alter the identity of Punjab forever.

“Need of the hour is to shun all differences and promote brotherhood in the society,” he said. Referring to the clash of ideologies over the Nanakshahi calendar and authenticity of Dasam Granth in the recent past, he said, “Enemy agencies are hatching conspiracies to divide us on religious lines. We have to remain united to foil their nefarious designs.” He appealed the religious leadership of the community to end confusion on the maryada issues and revoke their arbitrary decision of mixing Nanakshahi with Bikrami calendar.

WASHINGTON, D.C., April 22, 2010– On April 14, Dal Khalsa issued a statement entitled “Dal Khalsa swears by sovereign self-rule for Sikhs.” In the statement, Dal Khalsa, under the leadership of its president, H.S. Dhami, said, “The Khalsa Panth is not just a religious body but also a sovereign political entity. Throughout the centuries, the Sikhs have had a unique place among the people of world, developing into a distinct nation in their own right. The concept of sovereignty and statehood is a fundamental part of our very existence.”

At its leadership meeting, Dal Khalsa also passed a resolution that stated, “Today is our National day. Though British suspended the political sovereignty of the Sikh Nation with the annexation of Punjab in 1849 yet we, the Sikhs, remain a Nation though subjugated. Sikhs as a nation has been struggling for its freedom against all odds, refusing to submit to those who aim to eliminate their identity”. They also called for commutation of the death sentence on Professor Devinder Pal Singh and the release of all political prisoners, taking special note of Bhai Daljeet Singh. According to a report by the Movement Against State Repression (MASR), 52,268 Sikhs are being held as political prisoners in India without charge or trial. Some have been in illegal custody since 1984 Many are held under the repressive so-called “Terrorist and Disruptive Activities Act” (TADA), which expired in 1995. “These prisoners never committed any crime but peacefully speaking out for Sikh freedom,” said Dr. Gurmit Singh Aulakh, President of the Council of Khalistan. “What is a democracy doing holding political prisoners?,” he asked. “This alone shows that for Sikhs and other minorities, there is no democracy, no freedom of speech.” He recalled the arrests of 35 Sikhs for making speeches and raising the Khalistani flag.

Sardar Dhami also said that the Sikh community that “has sacrificed fifty thousand youth can’t abandon its aims and goals half-way.” Those 50,000 youth are among over 250,000 Sikhs killed by the Indian regime since 1984, along with more than 300,000 Christians since 1948, almost 100,000 Muslims in Kashmir since 1988, and tens of thousands of Assamese, Bodos, Manipuris, Tamils, Dalits, and others. The Indian Supreme Court called the Indian government's murders of Sikhs worse than a genocide.

Dr. Aulakh said that Dal Khalsa and other leaders who support Khalistan should be supported. “They have shown the true Sikh spirit of ‘Khalsa Bagi Yan Badshah,’” said Dr. Aulakh. “A committed Sikh will not back down in the face of repression. We praise Sardar Dhami and other pro-Khalistan leaders and we pray that Guru will continue to uphold them in the true Sikh spirit,” he said. “I urge all Sikhs to support those leaders who stand strong for a sovereign, independent Khalistan. It is our birthright,” he said. “We can never accept the rule of slavemasters. We owe it to the Gurus and to future generations to liberate Khalistan.”

In the November 16-30, 2008 issue of Dalit Voice, V.T. Rajshekar wrote, “It is only the Brahminical people who say India is a ‘nation’ while the history says Indian was never, ever a nation.” India is a multinational state thrown together by the British colonialists for their administrative convenience. As Steve Forbes pointed out in his excellent Forbes magazine article “India, Meet Austria-Hungary,” history shows that such countries collapse, from the Austro-Hungarian Empire to the Soviet Union to Czechoslovakia to Yugoslavia. The breakup of India is inevitable. We must ensure that it occurs peacefully.

“As Professor Darshan Singh, a former Jathedar of the Akal Takht, said, ‘If a Sikh is not a Khalistani, he is not a Sikh’,” Dr. Aulakh noted. “We must continue to pray for and work for our God-given birthright of freedom,” he said. “Without political power, religions cannot flourish, repression continues, and nations perish.”

Vaisakhi Mela - Jasjot Singh Ghuman - Which Showcases The True Panjabi Virsa & Traditions Of Our Homeland Panjab We Hope Everyone Had A Wonderful Vaisakhi! :D

Dal Khalsa Congratulates Everyone On Vaisakhi 2010 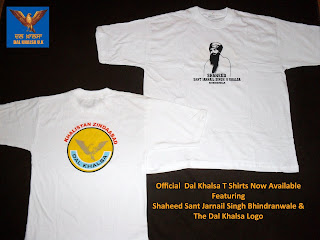 Dal Khalsa UK distributed T Shirts of Shaheed Sant Jarnail Singh Ji Khalsa Bhindranwale at the Southall Nagar Kirtan on April 11th 2010 in what was the biggest Nagar Kirtan since 1999 with appx 220,000 in Attendence according to Police figures.

While the vast majority of the sangat and sevadars at the nagar kirtan wore the T Shirts,threats were made to sevadars by certain individuals associated with Taksal and a so called Dal Panth UK about 'breaking legs',if the T Shirts/Posters distribution continued,all due to the reason the word Shaheed was used.Upon hearing this sevadars and sangat was outraged and confronted the associates of the threat makers and a large confrontation occured between the two sides at the stall and at the car park of Singh Sabha Southall Park Ave.

Dal Khalsa UK wishes to once again make it crystal clear that the T Shirts launched at the nagar kirtan have nothing to do with the Taksal / Dal Panth UK or any other group THEY HAVE NO SAY WHATSOEVER IN WHAT T SHIRTS WE GET MADE OR GIVE OUT! and more importantly they have no right to threaten sevadars with threats such as 'breaking legs'.They should take the confrontation in the car park as a warning from the sangat and local youths that WE WILL NO LONGER TOLERATE THREATS AND WILL NO LONGER KEEP THE TRUTH BURIED ABOUT THE SHAHEEDI OF THE GREATEST SIKH OF THE 20TH CENTURY,the threats have strengthened our resolve to continue distributing such material and t shirts to counter the lies that these people tell to our youth and our community.Not only have these lies of Shaheed Sant Bhindranwale comming back already helped destroy the Khalistan Movement they have confuseSd the youth and from what was seen at the nagar kirtan - the sangat has now had enough.The Akal Takht accepts that Sant Bhindranwale is Shaheed and so does the entire Panth apart from a few elements such as this faction of the Taksal or new 'Dal Panth UK' which is a mish mash group of 'nihangs' and taksalis and so on.Instead of making threats and driving people away from the Gurdwara and Sikhism and instead of continuing to LIE and keep a LIE alive they should re examine their actions and so called beliefs.

The British Sikh Student Federation out rightly condemns attempts by mischievous elements of the Sikh Community from stopping the distribution of T-shirts and Posters of Sant Bhindranwale at the Southall Nagar Kirtan this past Sunday because they contained the suffix of SHAHEED on them.

Though not in agreement, BSSF fully respects the views of those Sikhs who still believe that Sant Jarnail Singh Bhindranwale are alive however, we would expect that our view and opinions are respected in the same way.

This was not the case on Sunday!

This is not the first time that such provocative behavior has taken place by the same small group of people.

There was a strong chance of a violent clash at the Ludhiana protest programme at Havelock rd Gurdwara, Southall in December 2009, but due to the diligence of the of BSSF sewadars and elders Sikh Leaders a clash was prevented and the trouble makers were quickly stopped.

The Truth cannot be silenced!

We would like to appeal to the Sangat that BSSF has refrain with great emotional stress from being dragged into a confrontation however if such behavior continues the same cannot be guaranteed.