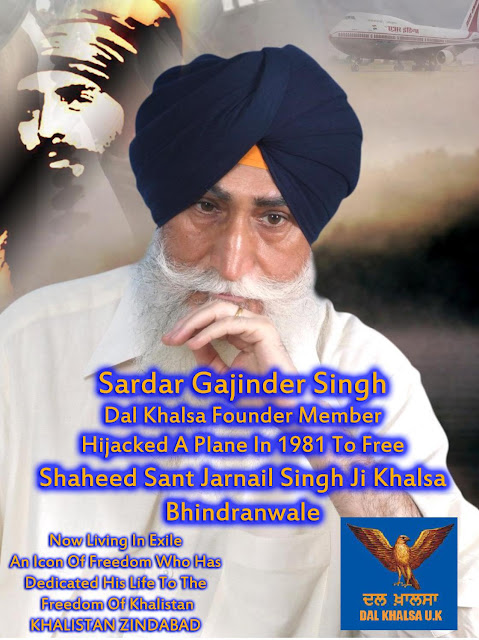 EVERYONE SHARE THIS PIC & HONOUR A FORGOTTEN HERO,SARDAR GAJINDER SINGH DAL KHALSA FOUNDER MEMBER WHO HIJACKED A PLANE IN 1981 TO FREE SHAHEED SANT JARNAIL SINGH JI KHALSA BHINDRANWALE,HAD IT NOT BEEN FOR BHAI GAJINDER SINGH JI,SANT JI MAY NOT HAVE BEEN FREED.BHAI SAHIB & OTHER DAL KHALSA MEMBERS NEVER HARMED ANYONE ON THE PLANE,THEY USED A SIMPLE APPLE TO HIJACK IT & TAKE IT TO LAHORE WHERE THEY WERE ARRESTED & SPENT 16 YEARS IN JAIL.BHAI SAHIB HAS DEDICATED HIS LIFE TO SIKH FREEDOM & IS AN ICONIC POET HE IS NOW LIVING IN EXILE AND HAS NOT SEEN HIS FAMILY IN YEARS & DID NOT SEE THE FUNERAL OF HIS PARENTS - THIS IS WHAT YOU CALL DEDICATION..LETS REMEMBER HIM & TELL HIS STORY A TRUE LIVING SHAHEED - SARDAR GAJINDER SINGH JI

United Sikh Media Thanks The Sikh Nation For Support 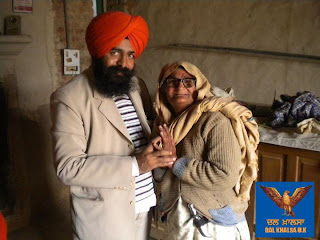 DAL KHALSA'S SARBJIT SINGH GHUMAN IS MEETING THE FAMILIES OF SHAHEEDS HERE HE IS SEEN WITH THE MOTHER OF SHAHEED BALJINDER SINGH CHOWKIMAAN - MATA DALBIR KAUR ..
ਸ਼ਹੀਦਾਂ ਦੇ ਘਰ ਵੱਲ ਫੇਰੀ-੨
by Sarbjit Singh Ghuman on Wednesday, February 8, 2012 at 10:32am ·

THIS VIDEO FROM ALEX JONES CHANNEL TALKS ABOUT HOW YOUTUBE ARE BLOCKING VIDEOS FOR NO REASON,WE HAD A SIMILAR PROBLEM ON OUR NEW CHANNEL,A VIDEO EXPOSING ANNA HAZARE WAS REMOVED IN 4 HRS FOR SO CALLED 'VIOLATIONS' THE ONLY WAY TO GET OUR VOICE OUT IS TO FIGHT CENSORSHIP LIKE HE SAYS IN THE VIDEO..NEW LAWS SUCH AS 'SOPA'ARE BEING PROPOSED IN THE USA WHICH WILL MAKE IT HARDER FOR FREE SPEECH ON THE INTERNET,WE STAND WITH WIKIPEDIA & OTHER SITES WHO ARE AGAINST THIS BLOCKING OF FREE SPEECH,WITH GURU SAHIB'S KIRPA OUR DAL KHALSA CHANNEL WILL BE BACK VERY SOON,NO FALSE COPYRIGHT CLAIMS BY HINDUTVA INDIAN AGENTS CAN STOP US,AS OF YET NO ONE IS WILLING TO FACE US IN A COURT OF LAW AS WE HAVE INITIATED A LEGAL PROCESS TO GET OUR CHANNEL BACK

Portrait of Sardar Satnam Singh of the Dal Khalsa, who hijacked a  plane in 1981 in protest of the arrest of Sant Jarnail Singh Ji Khalsa Bhindranwale for the alleged murder of the Hindu RSS newspaper editor Lala Jagat Narain.
Lala Jagat Narain was the owner of a newspaper called Jag Bani.  He was killed off for writing three articles in his newspaper to the effect that Guru Gobind Singh consorted with prostitutes and was sexually depraved. After his death his son took over the leadership of the newspaper and carried on with the same virulently anti-Sikh policy. He too was also killed off.  During the Sikh insurgency from 1980 to 1995, the Indian Government afforded extra-ordinary special privileges to the newspaper so that it could keep on publishing incendiary articles against Sikhs (from the very heartland of the Sikhs in Jullunder). The newspaper office in Jullandar were like an army cantonment.
The team of  hijackers was led by Sardar Gajinder Singh who was the author of the political tractus: Five Arrows More (an allusion to the five arrows given by Guru Gobind Singh to Banda Bahadur in the jungles of Nandehr).

The portrait of Sardar Gajinder Singh

The Flag Of  The Dal Khalsa

The Flag Of The Dal Khalsa

The Dal Khalsa In The United Kingdom

Dal Khalsa UK's Facebook Page http://www.facebook.com/pages/Dal-Khalsa-UK/95881811720 Dal Khalsa UK is under Cyber attack our youtube channel was forcefully shut down through false copyright claims on our videos.We have put legal notices in to youtube to reinstate our account within 14 days ,if with Guru Sahibs Kirpa it is reinstated we URGE ALL OF YOU to download all the videos on the channel and upload them on your respective youtube channels.Attempts were made to close down our long running blogspot as well as our Facebook Profiles,which were reported to Facebook for so called abuse.This comes at a time when we have been exposing Hindutva India & its human rights abuses against the Sikh Nation.We have also received threats to kill us and shut us up forever.Several other Sikh Youtube accounts and websites have also been hacked such as Sikhs For Justice,without a doubt we would like to state that Hindutva Indian Agents are behind this operation against the Sikh Nation to take away our free voice & freedom.In Panjab our Nation is silenced through terror now they are trying to use backhand methods & threats to silence us online.Dal Khalsa UK/United Sikh Media will continue to serve you the Sikh Nation and will continue to expose the Hindutva Attacks on our Nation.It is vital we receive all the support we get from the sangat at this crucial time for it is only with the kirpa of Guru Sahib and blessings/support of the sangat we work day & night for the Freedom & Education of the Sikh Nation.We thank each and every single one of you for the support you have given us and hope you continue to stand by us. This is a Media/Information War we cannot loose this war for the truth has to be exposed for the World & indeed Sikh Nation to see Resistance Is Victory!

THIS IS THE REASON DAL KHALSA UK IS UNDER ATTACK ,OUR ACCOUNTS BEING SHUTDOWN THROUGH FALSE COPYRIGHT CLAIMS,THREATS BEING MADE TO TRACK US & 'SHUT US UP FOREVER' ..ALL BECAUSE WE WANT TO UNCOVER THE TRUTH FOR ALL TO SEE..THE TRUTH WHICH THESE GROUPS OF PEOPLE WANT TO HIDE...OUR AIM IS TO EXPOSE THE TRUTH FOR WHAT IT IS NO MATTER WHAT HAPPENS...WE WILL ALWAYS WORK FOR THE BETTERMENT & EDUCATION OF THE SIKH NATION & FOR YOU....THE LAST WORDS IN THE ABOVE VIDEO IS A MESSAGE TO THOSE WHO WANT TO 'FINISH US OFF'

OUR DAL KHALSA BLOGSPOT WHICH HAS BEEN RUNNING SINCE 2007 SHUT DOWN LAST NIGHT ,IN SIMILAR CIRCUMSTANCES LIKE OUR YOUTUBE,THANKFULLY WITH GURU SAHIB'S KIRPA IT HAS NOW BEEN RESTORED...THIS IS AN UNPRECIDENTED CYBER ATTACK NOT JUST ON DAL KHALSA UK - BUT THE WIDER DAL KHALSA INTERNATIONAL AS AN ORGANISATION...WE THANK YOU ALL FOR YOUR CONTINUED SUPPORT...WE WILL KEEP YOU UPDATED IN THE SITUATION AS THINGS DEVELOP

OUR ENTIRE YOUTUBE CHANNEL 'DALKHALSA' HAS BEEN DISABLED BY YOUTUBE DUE TO FALSE COPYRIGHT CLAIMS ON OUR VIDEOS BY THOSE WHO HAVE BEEN MAKING THREATS AGAINST US,THESE PEOPLE RANGE FROM FANATICAL HINDUTVA SUPPORTERS,TO SO CALLED 'SIKHS' WHO WANT TO STOP THE TRUTH GETTING OUT,WE HAVE PUT IN COUNTER CLAIM NOTICES TO CHALLENGE THESE CLAIMS IN A COURT OF LAW..THOSE WHO PUT IN THE CLAIMS HAVE 14 DAYS TO RESPOND IF THEY DO NOT RESPOND OUR CHANNEL WILL BE BACK UP...IF WITH GURU SAHIBS KIRPA & THE BLESSINGS OF YOU THE SANGAT OUR CHANNEL IS REINSTATED WE URGE EACH & EVERY SINGLE ONE OF YOU TO DOWNLOAD AS MANY VIDEOS AS YOU LIKE FROM OUR CHANNEL & TO UPLOAD THE VIDEOS ACROSS YOUTUBE & FB,WE CONTINUE TO APPEAL TO ALL TO SPREAD THE TRUTH BY CREATING VIDEOS LIKE WE HAD OUR ON OUR CHANNEL SEVERAL OF OUR FB PROFILES HAVE ALSO BEEN SHUTDOWN & DEACTIVATED DUE TO FALSE REPORTS..ALL @ DAL KHALSA UK THANK EACH & EVERYONE OF YOU FROM THE BOTTOM OF OUR HEARTS FOR STANDING WITH US & SENDING MESSAGES OF SUPPORT AT THIS CRITICAL TIME ..WE TRULY APPRECIATE ALL THE SUPPORT WE ARE RECEIVING..WE WILL KEEP YOU UP TO DATE & WILL START SEVERAL DISCUSSIONS ON THIS PAGE ON HOW WE CAN FURTHER THE SIKH MOVEMENT.... THANK YOU ONCE AGAIN

Remembering Shaheed Sant Bhindranwale " A Tear In My Eye"

WATCH THIS VIDEO WITH ALL YOUR HEART & LISTEN TO THE WORDS WITH ALL YOUR SOUL & YOU WILL HAVE A TEAR IN YOUR EYE...NEVER FORGET 1984

Reality Of The Sikh Nation .. 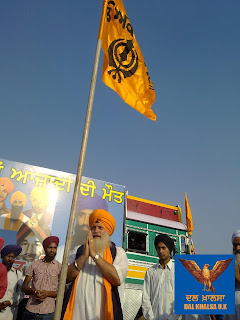 Hindutva India to Britain: We don't need the 'peanuts' you offer us in aid

UNGRATEFUL HINDUTVA INDIA,THESE BHAMANS ARE GETTING A BIT TOO BRAVE THESE DAYS.FIRST THEY TAKE THE MONEY DO A FIGHTER JET DEAL WITH FRANCE & NOW ANNOUNCE TO THE WORLD BRITAIN AID IS PEANUTS ..SHAME ON INDIA AROUND 40% OF THE WORLDS POOR LIVE IN YOUR COUNTRY YET YOU HAVE A SPACE PROGRAMME,HOSTED THE F1 GRAND PRIX HAVE MORE BILLIONAIRES THAN THE UK.. & STILL TAKE AID FROM OTHER NATIONS..THE UK GOVT WILL NOT TAKE THIS LIGHTLY NOW THAT THE BHAMAN MUKHERJEE HAS DECIDED TO PUBLICLY DEFAME THE COALITION GOVT.

Hindutva India to Britain: We don't need the 'peanuts' you offer us in aid

India's Finance Minister referred to the financial aid given by Britain to his country as nothing more than 'peanuts', it is claimed.
It is also claimed that Pranab Mukherjee and other Indian ministers tried to reject the money - around £280million a year - from the UK in 2011, but the British Government 'begged' them to take the money.
The Sunday Telegraph claims that the Indian government were disposed to reject the money in April last year, because of the 'negative publicity of Indian poverty' highlighted by the aid. Chancellor of the Exchequer George Osborne, left, shakes hands with India's Finance Minister Pranab Mukherjee on a visit to London in July last year
According to official transcripts, Mr Mukherjee said: 'We do not require the aid. It is a peanut in our total development exercises.'
Figures show India's economy is booming - and may eclipse Britain's economy within the next decade.

The row over aid to a booming country was exacerbated by the news last week that French firm Dassault Rafale was selected as the preferred bidder to supply 126 military jets to the Indian air force.
It was hoped the £13billion deal would be given to the UK - with Government officials claiming the £1billion of aid paid out to India over the last five years would help win the investment.
The British bid, by BAE Systems, which builds the Eurofighter Typhoon jet, was consigned to second place. The British Government, headed by Prime Minister David Cameron (right) and Deputy PM Nick Clegg (left), apparently begged India to accept its aid
International Development Secretary Andrew Mitchell said in December that Britain’s controversial foreign aid programme was partly designed to win the bid.
The aid package is 15 times larger than the £18million France sent to India in 2009.
Asked to justify Indian aid last year, Mr Mitchell said: 'It's a very important relationship. The focus is also about seeking to sell Typhoon.'
The decision was also a setback for David Cameron, who visited India in 2010 with six Cabinet ministers and around 60 businessmen to try to establish Britain as the ‘partner of choice’ for India. Rejected: RAF Typhoons fell to second place, despite the belief that controversial aid packages would secure the India contract for Britain Poor: India is a rich nation and receives billions in aid, yet millions still live in extreme poverty
During Prime Minister's Questions in the House of Commons, Mr Cameron said he was 'disappointed' by the decision.
He said: 'We don't expect any job losses stemming from this decision and it does not rule out the Typhoon for India.'
He insisted BAE Systems was still in the hunt for the contract, despite losing the first round of bidding.
Indian officials said Dassault emerged in front because the Rafale jet was ‘much cheaper unit-wise’ than the Eurofighter. Booming: Industry in India is set to overtake Britain in the next decade. Here a General Motors India employee works on the assembly line in Halol, near Ahmedabad

It was reported that Dassault slashed its price demands to ensure the deal was done.
One Indian defence ministry source said: ‘The Indian air force, which is well-equipped with French fighters, is favouring the French.’ The Rafale jets will replace India’s ageing fleet of Russian MiGs.
According to financial advisers Merrill Lynch, India has 153,000 dollar-millionaires — a 20 per cent rise in a year, compared with Britain’s own paltry increase of less than 1 per cent.
Such is the economic power of India that it now gives out more foreign aid than it receives, and has handed over £3.5billion to cement relations with impoverished Africa.
Meanwhile, it invests huge sums in ambitious projects: £2billion will put the first Indian astronauts into space by 2016, and the annual defence budget tops £22billion, with a third aircraft carrier now under construction in an Indian shipyard.