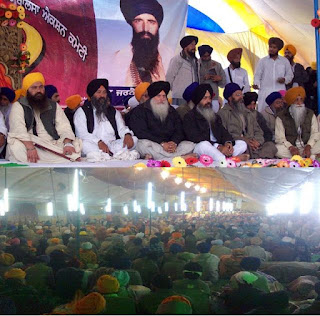 Bringing up a joint front against the Badal government, Panthic organisations have decided to contest the upcoming SGPC polls urging Sikh groups across the world to prevent SAD members from addressing religious gatherings in their areas. The announcements came following a rally held by these radical groups which came together at the Jor Mela on Friday.
Taking a tough stance against the SAD president and Punjab CM Parkash Singh Badal, members of the Khalsa Action Committee (KAC), SAD (Panch Pardhani), Dal Khalsa, Panthic Council and Sikh Students’ Federation joined hands to “cleanse” the SGPC from the corrupt “gang of Badal and his coterie”.

Sikh groups fired salvo against Parkash Singh Badal and his son Deputy CM Sukhbir Singh Badal for patronising self-styled godmen and allowing Hindutva forces a free hand in Punjab. “They can do anything for politics,” said KAC Chairman Bhai Mokham Singh. Blaming the Badal duo for the Ludhiana violence where a Sikh, Darshan Singh Lohara, was killed in police firing on December 5, he urged the Sikhs world over to boycott Akali ministers. The leaders also paid tributes to Lohara and passed a resolution declaring him a “martyr of the faith”. Another resolution was also passed urging the gurdwara management committees not to allow Akali ministers to speak from gurdwara stages because of their proximity with so-called deras and cults mushrooming in Punjab and other areas.
Opposing the “Badalisation of the SGPC”, speakers lambasted the SAD leadership for ruining Sikh institutions including Akal Takht for political mileage. “Oust Badal from gurdwaras,” they said. Bhai Harpal Singh Cheema, the organiser of today’s conference, blamed SAD for “all the ills plaguing the Sikh institutions”. “We pledge to raise a joint platform with other like-minded groups to defeat Badals in the SGPC elections,” he added. Dal Khalsa leader Kanwarpal Singh asked the Sikhs to reject those who have posed threat to the basic fundamentals of Sikh religion for their benefits.

Tension gripped Uttar Pradesh’s Bahraich district Monday as hundreds of Sikhs carried out protests over desecration of their holy scripture.Hindu extremists burnt pages of the holy scripture outside a Sikh shrine Sunday night. The desecration was noticed by community members Monday morning.

Agitated over the burning of the Guru Granth Sahib, Sikhs protested in the Fakarpur area in Bahraich, some 270 km from Lucknow,U.P police showed their real face regarding these protest and tried to crash the protest by attacking the protesters.It is rather strange the country claiming to be largest democracy in the world has no place for human rights of the minorities even for peace full protest.

“Taking into account the protests, additional security has been deployed in Fakarpur and its adjoining areas,” Police Inspector Brijendra Singh told reporters in Bahraich.“The situation is tense but under control. We have already arrested three Hindu extremists, who have been charged with burning the holy book. Efforts are on to nab others, who were involved,” he added.

its is strange that when Hindu extremists take their violent protest regarding sensitivity to their faith they never challenged by the same police,even when they are targeting minorities.