STOP WATCHING THE STUPID KABBADI CUP & INFORM RELATIVES/FAMILY FRIENDS ESPECIALLY IN PANJAB ABOUT BHAI SAHIB,HE MAY PASS AWAY IN 48 HRS...HISTORY WILL NEVER EVER FORGIVE THE SIKHS IF THINGS CARRY ON LIKE THIS ESPECIALLY THE SIKHS OF PANJAB,EU,NORTH AMERICAN SIKHS ARE AT THE FOREFRONT OF CREATING AWARENESS...BUT PANJAB IS BUSY DANCING TO BOLLYWOOD & WATCHING STEROID TAKING KABBADI PLAYERS Amritsar, Punjab (December 12, 2013): Stressing on Panthic unity at this critical juncture, Dal Khalsa head H S Dhami appealed to leaders of the Sant Samaj to be sensitive towards the Sikh situation and stop raising controversial issues including Nanakshahi calendar that have a potential of creating divisions amongst the community.

He termed the demand made by members of the Sant Samaj before the Jathedar of the Akal Takht to revert to the Bikrami calendar as an attempt to derail the morcha launched by Sikh activist Gurbakash Singh to seek the release of 6 Sikh detainees, who had served their legal prison terms.

In a statement to the media, he said the issue of the calendar has potential to divide the community and the timing chosen by the Sant Samaj to rake it up, smells that “there was more to it than meets the eye”.
He claimed that a large number of youth and Panthic groups were rallying behind the cause of Gurbakash Singh, who is fast unto death since Nov 14. “Wittingly or not, Sant Samaj has brought the controversial issue to fore to divert the attention of the Sikhs from the main issue”.

Detesting the claims of the Sant Samaj leaders that Nanakshahi calendar had created confusion, he said the mixing of Nanakshahi with Bikrami led to the very confusion and division.
While accepting that Sant Samaj members has a right to air their viewpoint on all issues, Dal Khalsa leader said they must wait till the issues raised by Gurbakash Singh’s gets resolved.

Join The Dal Khalsa UK Facebook Page for updates https://www.facebook.com/pages/Dal-Khalsa-UK/95881811720
Interview of TruSkool probably the only Sikh Producer who actually stands for something & speaks the truth in regards to the 1984 Sikh Genocide,may he continue to speak the truth with Guru Sahib's Kirpa.Tru Skool has always given the rustic reality whenever he has spoken about the reality of the Sikh Nation,and we are proud of him & his contribution towards speaking about atrocities/genocide on Sikhs & Sikh Freedom.NOTE: This is part of a larger radio interview with Gen Brar many other Sikhs called in to the show to express their views as well. 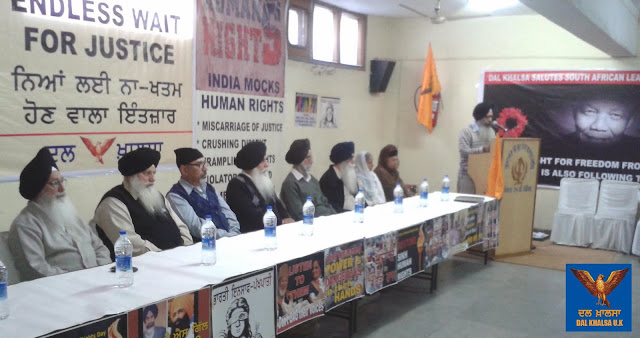 Chandigarh- The Dal Khalsa head Harchranjit Singh Dhami said notwithstanding the victory of the opposition BJP at the recently held assembly elections, the march of Narendra Modi to the Prime Minister’s seat spells doom for justice and fair play for minorities.
The association of KPS Gill – who flagrantly violated human rights in Punjab with Modi, is clearly a grim reminder of what the future holds for minorities and justice-seekers in this country, he added. 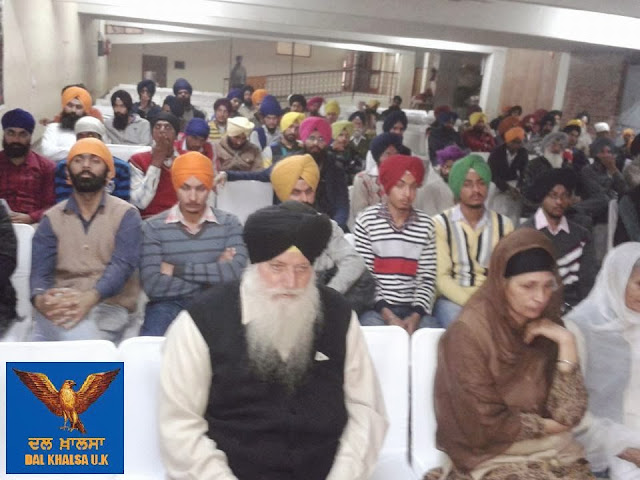 He said the perpetrators of extra-judicial killings and violators of human rights were now in command of the police. Having suppressed the Sikh struggle for sovereignty, the State has masterminded the technique of crushing dissent, he added.
Dhami was speaking at a seminar on ‘Endless wait for justice in Punjab’ organized by his organization to mark the 65th World Human Rights Day. 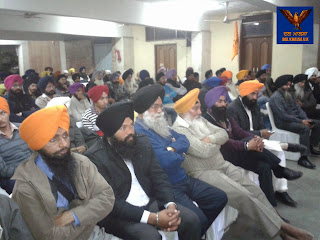 He said the agony, pain and cries of a large number of families whose children were maimed, killed, jailed, thrown into canals, those who had to leave home and hearth and settle in foreign countries continues to haunt them, but the State remains a deaf and dumb spectator, the “ever hospitable Punjab for Kabaddi matches” refuses to even acknowledge the existing of such families.

The organizers dedicated the Seminar to the ideals and life of the tireless South African leader Nelson Mandela who changed the course of his country’s history ending apartheid and slavery for his peoples. The large sized banner saluting Mandela was put up on the backdrop of the stage. 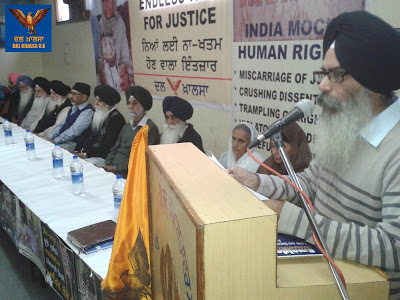 He said what worries us that while India conferred the Bharat Ratna on Nelson Mandela, the Indian leadership’s actions are contrary to the ideals and principles he stood for. Nelson Mandela fought for freedom from slavery, India continues to shackle dissent and oppose right to self-determination of various ethnic minorities and nationalities, he said. 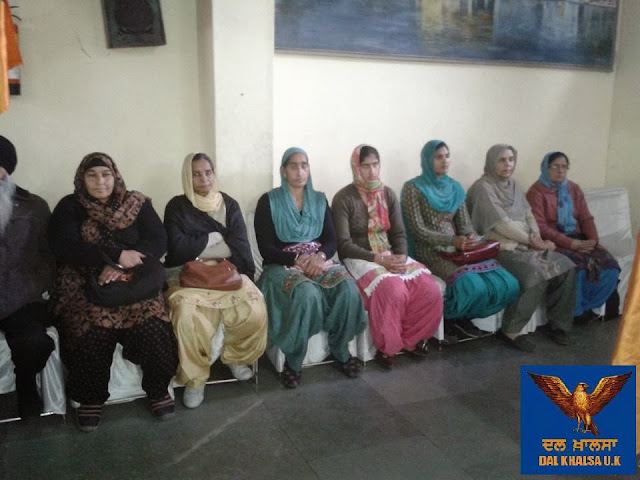 He further said India refuses to release prisoners who have surpassed their legal prison terms in the most arbitrary manner. This discriminatory practice prevails not only in Punjab but in Kashmir and the North east too. Nelson Mandela suffered at the hands of the “white leadership”, but did not show any bitterness once he was released. However, Indian state continues to follow a policy of hatred and vendetta towards the Sikh people and other nationalities including the Kashmiris. 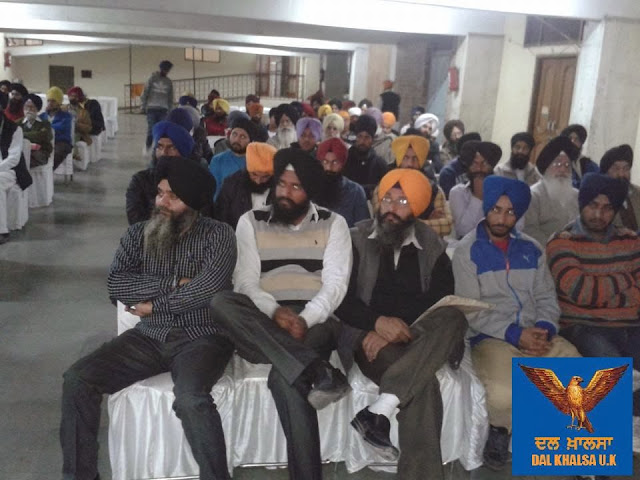 Speaking at a function, the activists of human rights bodies and socio-politico groups sought the proactive intervention of the United Nations to prosecute BJP’s Prime Ministerial candidate Narendar Modi and former DGP K P S Gill for what the organizers termed as “crime against humanity”, referring to Gujarat 2002 massacre and killings of Sikh youth in extra-judicial methods during militancy period respectively. 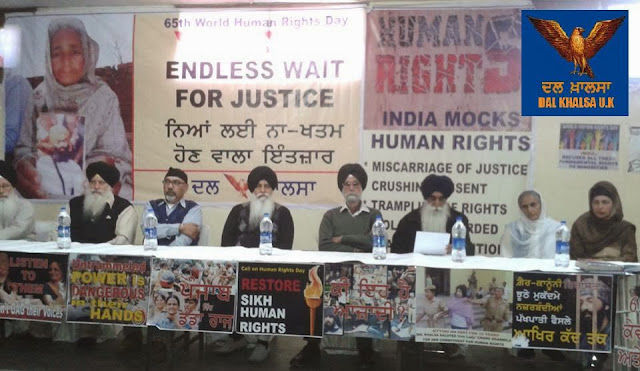 They condemned the suppression of Sikh rights and sought release of all political prisoners and restoration of their rights. They took the state government to task for embolding the police force with brute powers. On one of the banner it was written: Untrammeled power is dangerous in their (police) hands.

The organizers saluted the grit of Manipuri activist Chanu Sharmila, who is on fast for 13 years protesting the Armed Forces Special Powers Act. The gathering passed a resolution supporting the cause of Bhai Gurbakash Singh, who is on fast unto death for last 26 days seeking the release of those Sikh detainees who have completed their legal jail term. The organizers praised his spirit and steadfastness. Expressing concern over the deteriorating health of Gurbakash, they held Centre as well as state government responsible for it.

He said it seems unlikely that the Hindutva Indian State, Punjab government and the over-entrenched police leadership would learn to respect human rights. 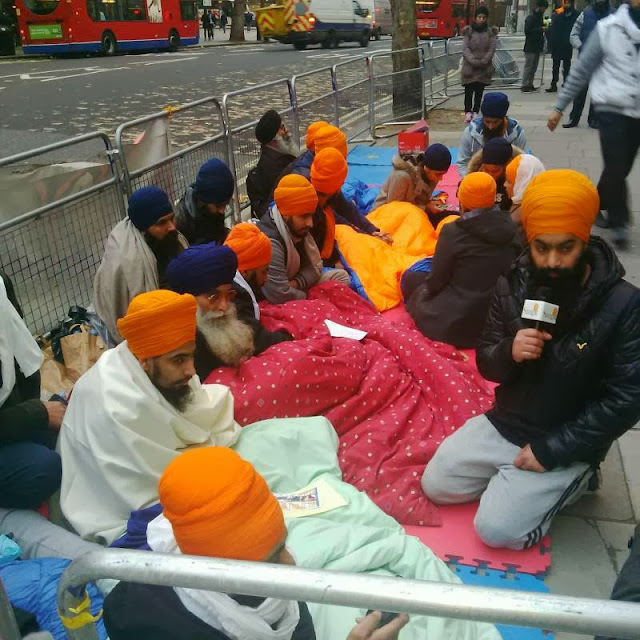