THE LATEST VIDEO FROM OUR PARTNER UNITED SIKH MEDIA CANADA & AN APPEAL FROM USMEDIACANADA & DAL KHALSA UK FOR YOU ALL TO SIGN THE PETITION NOW!! http://t.co/516fkEQ2

PLEASE TUNE IN TO SIKH CHANNEL 840 http://www.sikhchannel.tv/ WORLDWIDE - LIVE SRI AKHAND PAATH SAHIB TO MARK THE PARKASH PURAB OF SRI GURU NANAK DEV JI,PLEASE LEAVE THE LIVE FEED OF SRI AKHAND PAATH SAHIB ON IN YOUR HOUSE VIA YOUR TV OR LAPTOP FOR PEACE OF MIND OF FAMILY AS WELL AS TO EDUCATE FRIENDS/FAMILY OF WHAT SIKHI / GURBANI MEANS 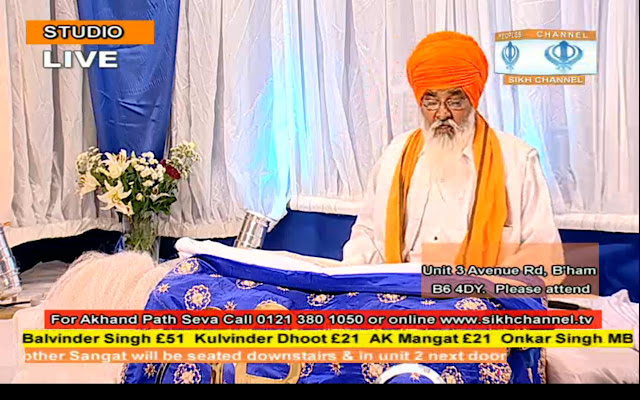 THE LATEST VIDEO FROM OUR PARTNER UNITED SIKH MEDIA CANADA

WHILE PAKISTAN MADE EVERY EFFORT TO PROVIDE SECURITY COMFORT AND FACILITIES TO SIKHS AT SRI NANKANA SAHIB & OTHER PLACES,WHILE WORLD GOVTS CONGRATULATED SIKHS ON SRI GURU NANAK'S GURPURAB HINDUTVA INDIA ARRESTED 700 - POSSIBLY OVER 1000 SIKHS IF YOU INCLUDE PANJAB ON THE PARKASH DIVAS OF SRI GURU NANAK DEV JI ...GURU SAHIB THEMSELVES WENT TO JAIL & TODAY THE SIKHS HAVE NO FEAR OF ANY JAIL IN THE WORLD!!! Baba Baljeet Singh Daduwal, Bhai Gurcharan Singh Babbar and others arrested by Uttrakhand Police on November 28, 2012.
It is notable that Baba Baljeet Singh Daduwal and Bhai G. S. Babbar were leading a peaceful march from Sri Akal Takhat Sahib to Haridwar to observe the Parkash Gurpurb of Sri Guru Nanak Dev Ji.
It is a historic fact that Guru Nanak Sahib had held a dialogue with Hindu Pandits at Haridwar and a Sikh Gurudwara Sahib named Gian Godri Sahib was established near Har Ki Pauri at Haridwar in the memory of visit of Guru Nanak Sahib. This Gurudwara was demolished during November 1984 Sikh genocide.
The march named “Fateh Yatra” started from Sri Akal Takhat Sahib, Amritsar (Punjab) on November 27, 2012 and reached Gurudwara Paunta Sahib (Himachal Pardesh) on the evening. Sikh Sangat held a night stay at Gurudwara Paunta Sahib. File Photo: Gurcharan Singh Babbar, Baba Baljeet Singh and Others at Sri Akal Takhat Sahib on August 08, 2011. A March was held from Sri Akal Takhat to Haridwara in August 2011.
On November 28, 201 2 when Sikh Sangat led by Baba Baljeet Singh and others reached on the banks of Godavri River, they were prevented by heavy police force deployed at the borders of Uttrakhand from entering the State. Sikh jatha began to recite Satnam Waheguru on the banks of Godavri.
There are reports that peaceful dharna by Sikh sangat continued for more than three hours.
Baba Baljeet Singh Daduwal, Bhai Gurcharan Singh Babbar, Kanwar Jupinder Singh, Baba Pardeep Singh Chandpura and Nihang Singh Bhai Raja Raj Singh  reportedly addressed the dharna. They criticized the government for banning entering of Sikhs in Haridwar.
According to reports the Sikh jatha was arrested by Sehaspur Police on the orders of SDM Sri Tripathi and SSP Dr. Jagdish Chand at around 2:30 pm.
Bhai Harpal Singh Cheema, acting president of Akali Dal Panch Pardhani has strongly condemned the arrest of Sikh jatha. 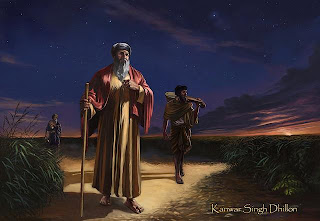 ON THIS DAY WE CONGRATULATE THE ENTIRE SIKH NATION & WORLD ON THE GURPURAB OF THE PARKASH DIVAS OF OUR 1ST GURU THE FOUNDER OF SIKHI DHAN DHAN SRI GURU NANAK DEV JI MAHARAJ, SATGUR NANAK PARGATEYA MITI DHUND JAG CHANAN HOYA - WITH THE EMERGENCE OF THE TRUE GURU THE MIST CLEARED & LIGHT SCATTERED EVERYWHERE - WE DEDICATE THIS BEAUTIFUL TRACK TO YOU ALL - REFLECT ON THIS DAY ,REFLECT ON SIKHI, REFLECT ON THE SACRIFICES THAT HAVE BEEN MADE TO DEFEND THE PATH OF SRI GURU NANAK DEV JI MAHARAJ

DHAN SRI GURU NANAK DEV JI MAHARAJ WHO GAVE US SIKHI,WORDS CANNOT DESCRIBE YOUR GREATNESS...EVEN TODAY YOU RESIDE WITH US & HAVE GONE NOWHERE ALL WE HAVE TO DO IS LOOK AT DHAN SRI GURU GRANTH SAHIB JI MAHARAJ WITHIN WHICH IS THE ONE LIGHT OF ALL THE GURUS

SPECIAL PROGRAMMING ON SIKH CHANNEL 840 ALL DAY ON THE GURPURAB OF THE PARKASH DIVAS OF DHAN SRI GURU NANAK DEV JI MAHARAJ http://www.sikhchannel.tv/

Sikhs heading to Haridwar for the three-day birth anniversary celebrations of Guru Nanak Dev, beginning November 27, at a spot near Har ki Pauri — where they claim the 450-year-old Gurdwara Gian Godhri Sahib was demolished in the 1984 anti-Sikh riots — may lead to a standoff with the Uttarakhand Police deploying forces in and around Haridwar to prevent any law and order problem.
All India Sikh Conference (Babbar) president Gurcharan Singh Babbar, Sant Samaj leader Baljit Singh Daduwal and others, who will leave for Hairdwar in what they call “Fateh Yatra’ after offering prayers at the Akal Takht on Tuesday, alleged that Uttarakhand Police had banned the entry of Sikhs in the state, particularly in Haridwar.
Claiming that due to the historic importance of Gian Godhri Sahib near Har ki Pauri, Sikhs wanted to celebrate the birth anniversary of Guru Nanak Dev there, Babbar said: “But Sikhs are being prevented from even entering Uttarakhand. Those Sikhs who live in Uttarakhand are being told not to enter Haridwar on November 27, 28 and 29.”
Daduwal also said that the Uttarakhand government was being “unjust by putting such restrictions on the movement of Sikhs”. “As far as gurdwara is concerned, revenue record shows that the land is in the name of Gurdwara Gian Godhri Sahib. But the government is not handing over the land for the construction of gurdwara,” he added.
Uttarkhand DGP Satyavrat, however, said: “No restrictions had been imposed on the entry of Sikhs by the Uttarakhand Police. Security has been beefed up to avoid any untoward incident, as a large number of people will gather on November 28 in Haridwar for a holy dip in the Ganga.”
Maintaining that the issue of the gurdwara was being looked into, he added: “As far as my knowledge goes, there were no riots in 1984 in Haridwar. I was the Tehri SP at that time. Though there were riots in Dehradun, no riots were reported in Haridwar. Even then, we are looking into the issue following the allegations that the gurdwara was demolished in the riots.”
Haridwar SSP Arun Mohan Joshi claimed the police were not preventing the Sikhs, but “identifying and stopping such persons who could pose a threat to communal harmony”. “Only a dialogue can solve the issue of gurdwara and it is underway with a committee looking into the case,” he added.
When contacted, SGPC chief Avtar Singh Makkar said that SGPC had been “repeatedly” writing to the Uttarakhand government to declare the historical site near Har ki Pauri as a memorial and provide land for the construction of the gurdwara. Makkar, however, said he was not sure whether the gurdwara was demolished during the 1984 riots.
“While the Uttarakhand government should have responded to our requests by now, I also appeal to the Sikhs going to Haridwar not to take law into their hands,” Makkar said.

Chandigarh/Bathinda, Punjab (November 27, 2012): According to information available with Sikh Siyasat News (SSN) SGPC Member from Sirsa constituency Baba Gurmit Singh Tirlokewala is undergoing treatment at PGI, Chandigarh. His condition is improving gradually and it is expected that he shall be from hospital in coming days.
Baba Gurmit Singh has reportedly issued an appeal to the Sikhs sangat to keep the peace.
It is notable that Baba Gurmit Singh had sustained sever injuries on November 24, 2012 when around two thousand followers of Dera Sauda Sirsa had attacked about a dozen of Sikhs near Valmiki Chowk, Sirsa, Haryana. Baba Gurmit Singh Tirlokewala undergoing treatment at PGI, Chandigarh
There are reports that many Sikh leaders are put in undeclared house-arrests by Punjab Police. According to a news report published in Daily Ajit newspaper Police personnel and vehicles have surrounded Gurudwara Sahib at Village Daduwal to restrict the movement of Baba Baljeet Singh Daduwal.
Leaders of Akali Dal Panch Pardhani Baba Hardeep Singh Mehraj and Bhai Darshan Singh Jagaramtirath told Sikh Siyasat News (SSN) over phone that police has surrounded their residences to restrict their movement.

Amritsar, Punjab (November 25, 2012): The Dal Khalsa has taken serious note of the hooliganism shown by the followers of “self proclaimed” godman Gurmeet Ram Rahim against the Sikhs in the town of Sirsa. The organization on Sunday slammed the Congress governments for its patronization to the head of the Sirsa cult.
Condemning the violent attack on Sikhs by dera followers, Dr Manjinder Singh and Sarbjit Singh Ghuman general secretary and secretary of the party, accused dera chief of engineering the violence and sought immediate action against the hooligans.
They said the Congress party in Delhi, Haryana and Punjab has been fuelling this dera to reap electoral benefits.
“The divisive policies of the Congress have certainly damaged the polity, strained people-to-people relationship and caused bloodshed”.
They said it’s unfortunate that the state was siding with such a person who has cases of rape and murder against him. “The courts may have granted bail to him but the manner in which logistic support in the form of Z-plus security; bullet proof vehicles, read beacon atop on his vehicles and 24-hour private guards who have been provided with all-India arms licenses, smacks of the state protecting its honoured guest”.
Seeking immediate steps to contain Sirsa dera head for his reckless and calculated outrage of Sikh sentiments, they rued that the repeated pleas of the Sikhs before the Government of India as well as the Chief Ministers of both Punjab and Haryana has gone unheard and unattended.