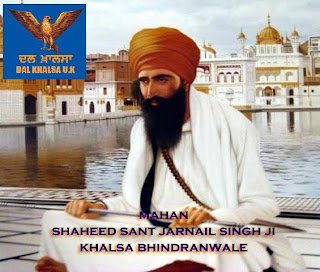 Dal Khalsa honours Mahan Shaheed Sant Jarnail Singh Ji Khalsa Bhindranwale on his birthday.It was on this day that the greatest Sikh Saint Soldier of our times was born who then went on to lead the Sikh Movement and ultimately gave Shaheedi defending the principals of Sikhism and Sri Harmandar Sahib & Sri Akal Takht Sahib.

''Phyiscal death I do not fear ....Death of a Conscience is a sure death''

Dal Khalsa supports Gurminder Guri for his recent Panthic album which speaks out against injustices against the Sikh Nation by India,along with his new song which honours Mahan Shaheed Sant Jarnail Singh Ji Khalsa Bhindranwale.

Dal Khalsa asks the Sikh Nation to support such artists such as Gurminder Guri for his Panthic songs and songs on Mahan Shaheed Sant Jarnail Singh Ji Khalsa Bhindranwale.Babbu Mann alongside Ranvir Dosanjh and now Gurminder Guri are doing a great seva for the Sikh Qoum in waking up the masses to reality and we fully support all artists working in favour of the Panth and ask all the Sikh Qoum to do so as well

Leaders of the Dal Khalsa and SAD (Panch Pardani) under the aegis of Khalsa Action Committee Thursday lashed out at Dera Sachkand Ballan’s Trust for attempting to sever ties with the Sikh community.

At a press conference Bhai Mohkam Singh, H S Dhami, Kanwarpal Singh, Kulbir Singh Barapind and Harpal Singh Cheema said the directive of the Dera Sachkand Ballan was to create a rift and division amongst the Sikh community. They said Dera ballan is just a wing of hindu rss,Ravadassia Sikhs were integral part of Khalsa Panth and Bhagat Ravidas ji was held in high esteem by all Sikhs.they are forceing hindu facism of sikhs under baner of bhagat ji name.

“The move to establish separate religion is a mischief by Dera Ballan trust”. We condemn it, said they and called upon the Ravidassia Sikhs not to get mislead by any such malicious propaganda. To a question, they listed the names of several Ravidassia Sikhs who have sacrificed their lives for the glory of the Sikh Panth.

Taking Dera Sacnkand Ballan Trustee’s to task, they said any disrespect to Guru Granth Sahib would not be tolerated. They took exception on the reports that two Ravidassia Gurdwara’s have formally installed the newly created book- Amritbani Satguru Ravidass maharaj ji”.

They lauded the bold stand taken by Sri Guru Ravidas Sadhu Sampardaye Society in rejecting the directive of Dera Ballan. The leaders said Baba Nirmal Das jore wale and his associates have timely snubbed the move meant to create animosity between Sikhs and Ravidassia Sikhs. The leaders met Baba Nirmal Das to show their solidarity with him. They also praised Samaj Bachao Morcha leader Gian Chand for rejecting the move of Dera Ballan.

The leaders blamed SAD Badal’s wrong policies and approach for Panthic crisis. Kanwarpal Singh said both jathedar of the Akal Takht and SGPC president has miserably failed to handle the situation and resolve the crisis may it be Nanakshahi calendar or excommunication of Prof Darshan Singh. Badalization of the SGPC was the root cause of the problems Sikhs have been facing, said Dhami.