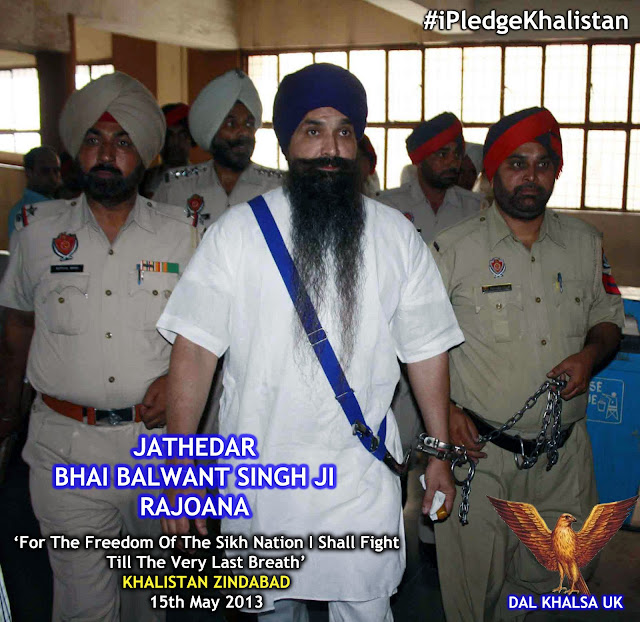 British Sikh Schoolgirl Murdered In India To Harvest Her Organs

INDIAN KILLER DOCTORS MURDER BRITISH SIKH SCHOOLGIRL IN ORDER TO TAKE HER ORGANS! THIS IS HOW SICK HINDUTVA INDIA IS OUR KIDS FROM THE UK ARE NOT EVEN SAFE! OUR THOUGHTS/PRAYERS ARE WITH GURKIREN KAUR'S FAMILY/FRIENDS..WAHEGURU

Birmingham schoolgirl "murdered in bid to harvest her organs"

A Birmingham schoolgirl was murdered by health workers in India in a failed attempt to harvest her organs, her devastated parents have sensationally claimed.
Gurkiren Kaur Loyal’s family said she was being treated for a simple case of dehydration when staff at a clinic gave her a mystery injection which took her life.
But her relatives said they guarded the eight-year-old’s body, meaning her organs could not be taken in time to be used in transplant operations.
So they claimed she was subjected to a “medieval” post-mortem examination during which all her major organs were removed in a bid to hide the truth of how she had been killed.
Gurkiren’s family said the Indian police and medical authorities made little attempt to investigate the death.
They said they only discovered her organs had been taken when her body was flown home to the UK. Only her eyes remained, they said.

The Foreign Office would only confirm that Gurkiren, from Hockley, died in India on April 2.
But Birmingham councillor Narinder Kooner and Ladywood MP Shabana Mahmood have united to back her family’s fight for justice – pressing the UK and Indian authorities for answers over the tragedy.
Gurkiren’s mum Amrit Kaur Loyal, a shop worker, said: “My baby was innocent and now I am devastated without her.
“Gurkiren was fine, she was chatting to us and planned to buy some gifts for her cousins.  While we were talking an assistant came up carrying a pre-filled syringe and reached for the tube in her hand.
“I asked what was the injection for, but he gave me a blank look and injected the liquid into her.
“Within a split-second Gurkiren’s head flipped back, her eyes rolled in her head, and the colour completely drained from her. I knew they had killed her on the spot.
“I knew my innocent child had been murdered.”
Coun Kooner, a friend of Gurkiren’s family, said it was “highly probable” that she had been killed in a bid to harvest her organs.
“People with money pay to help their family members,” she said.
“We are trying to build a portfolio of other cases.”
Gurkiren, a bright and bubbly pupil at Nishkam School in Soho Road, Handsworth, was on her first foreign holiday visiting her frail grandmother, who later died, over the Easter break.
Her family said she was taken to a clinic in Punjab after being sick, but was placed on a drip after blood tests revealed she was free of infection.
Under pressure to help the schoolgirl after the injection was given, medics transferred her to a nearby hospital but she could not be saved.
Amrit, who was on the trip with her postal worker husband Santokh Singh Loyal and 17-year-old son Simran, claimed Gurkiren’s medical records were disposed of and the family were not asked to pay for the blood tests, drip or the injection she received.


Police took a statement but the family said they obtained no evidence that Gurkiren’s death was investigated.
Worse still, Amrit said she was told a post-mortem examination would be required in India before her daughter’s body could be returned to the UK.
“They said they would use a hammer and chisel to open her,” she said. “I demanded a more dignified, discreet examination.”
Eventually, having kept watch over Gurkiren’s body to prevent evidence being destroyed, they were given assurances that a respectful autopsy would be carried out.
But, returning to the mortuary, Amrit said they found her daughter’s bloodstained and ripped clothes by an incinerator and that the post-mortem examination had been carried out by a non-qualified junior.
“It was medieval,” she said.
After chasing up death certificates, they had  Gurkiren’s body flown home and a UK post-mortem examination was ordered.
But Amrit said their hopes of finding out what was given to their daughter were shattered in a call from Birmingham coroner Aidan Cotter.
“He said it was impossible to come to a conclusion for the cause of death,” she said.
“They had nothing to work from, she had no organs in her body for them to take samples.
“I was mortified that all the pleading in India had no effect.
“There was no sensitivity, no humanity.”
Back in Birmingham, Gurkiren’s death sent shockwaves through the community.
At her school, a rose bush was planted in her memory by the leader of the Sikh Congregation at Guru Nanak Nishkam Gurdwara, Bhai Mohinder Singh Ji.
Her friends, parents and staff compiled a book of condolence which told of a popular girl who was a mother hen figure to younger children.
“You helped me when I fell over,” wrote one friend.
Her uncle Jas said: “She was the soul of our family. No family occasion will be the same. Our hearts are not in it.”
The Foreign Office said: “We can confirm the death of a British national in Punjab on April 2, 2013. We provided consular assistance to the family at this difficult time.”
The Indian High Commission did not respond to messages from the Mail.
A spokeswoman for Mr Cotter said an inquest had been opened and adjourned as staff awaited further information and, possibly, the return of organs from India.
She said: “A post-mortem examination was carried out, but we were unable to ascertain a cause of death. We are doing everything we can to help the family."


* The tragedy of Gurkiren Kaur Loyal has again thrown the spotlight on the reportedly “lucrative underground market” in human organs in India.
In 2007, Ravindranath Seppan, of the Chennai Doctors’ Association for Social Equality, admitted: “India’s rich are turning to India’s poor to live longer.”
He said the commercial trade of human organs remained big business, despite having been banned in 1994.
Ladywood MP Shabana Mahmood is working with Birmingham councillor Narinder Kooner, a friend of Gurkiren’s family, to fight for justice.
“This is a deeply shocking and devastating tragedy,” Ms Mahmood said.
“Gurkiren’s death, and the failure of the Indian authorities and the British High Commission to provide adequate support to the family, has added to their considerable distress – as has the appalling removal of all of her organs.
“I have raised this matter urgently with ministers at the Foreign Office seeking their support in ensuring Gurkiren’s organs are returned to her family.
“It is imperative that we have the chance to independently establish the cause of death with the authorities in the UK.”
* Anyone wanting to to support the campaign should email narinderkaur.kooner@birmingham.gov.uk

DEEPLY SAD NEWS THAT MATA SURJIT KAUR JI MOTHER OF BIBI KAMALDEEP KAUR & JATHEDAR RAJOANA HAS PASSED AWAY,SHE HAS SACRIFICED ALL HER CHILDREN FOR THE FREEDOM OF THE SIKH NATION & DESPITE ALL THE HARDSHIP NEVER GAVE UP,PLEASE DO ARDAAS FOR THE CHARDHI KALLA OF PENJI KAMALDEEP KAUR & THE ENTIRE FAMILY

Recently in Southall many rumours have been circulated by the opposition Sher Party Malhi/Sarpanch etc claiming Sri Guru Singh Sabha Park Avenue will be sold off to the Council & National Rail.Gurdwara Sri Guru Singh Sabha Southall & the Executive Commitee once and for all clear this false lie,neither is the Park Avenue Gurdwara for sale nor is there a secret conspiracy.

Crossrail & the Council want to work with Sri Guru Singh Sabha Southall in regards to the future development of the area around Southall Train Station as Park Avenue Gurdwara is next to the station it is important that the Gurdwara is consulted just like a private house owner is if a new development is to take place.

Regrettably recently there have been many rumours regarding the Park Avenue Gurdwara site. As you may or may not be aware the CrossRail (a major rail link between East and West London) project will mean that Southall railway station will be significantly expanded to handle the increase in capacity. The council approached the Gurdwara over three years ago (when previous committee was in office); proposing that the Park Avenue site be enhanced for the benefit of the whole community.

The various proposals have been looked at over the time, however no firm agreement has been made. We should note that the building of the new station will lead to a significant congestion, both in terms of public usage, and also in terms of increased road traffic (this is one of the main concerns that the Sangat already have).

Discussions are still continuing and the council have kindly confirmed the up-to-date situation in a letter that is available for your perusal – in the interests of transparency. You can view the letter below or view the PDF Version by clicking here.
Gurfateh 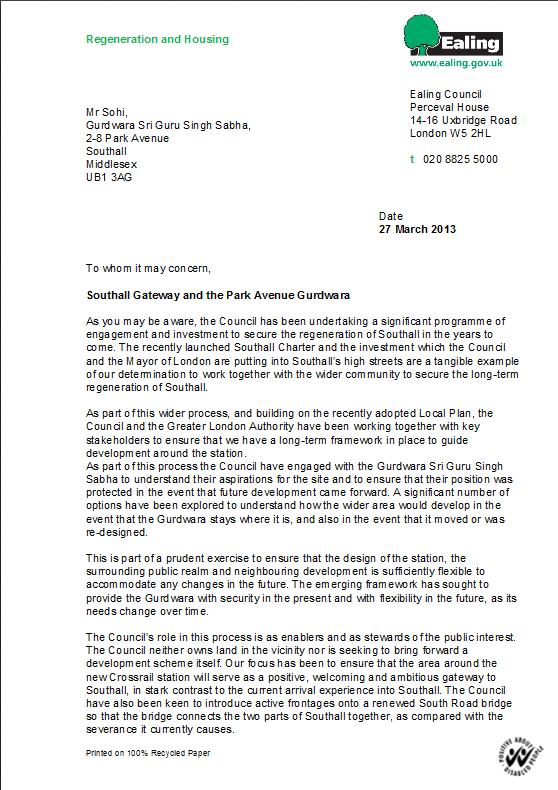 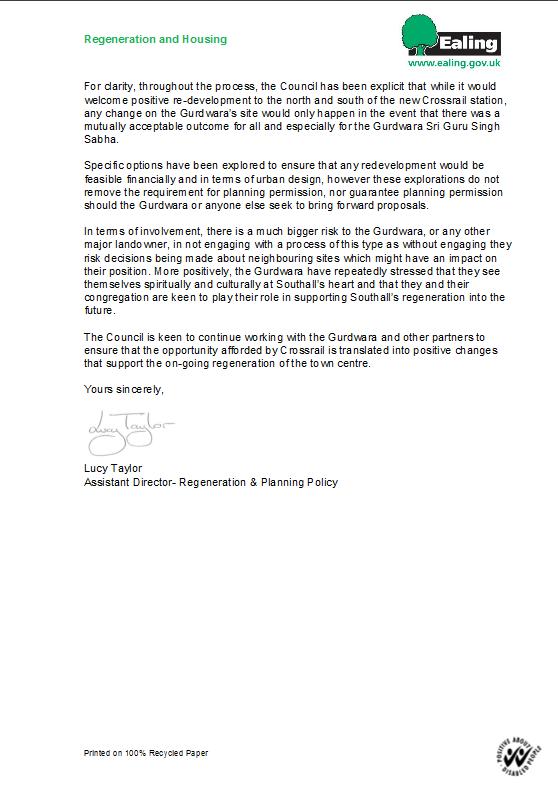 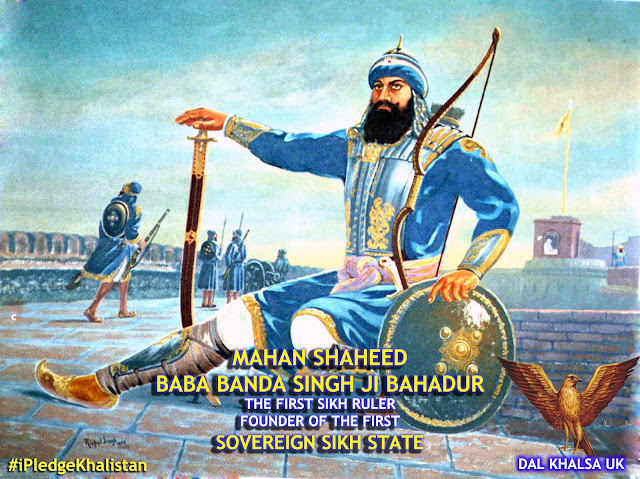 SHAHEED BABA BANDA SINGH JI BAHADUR TODAY BEGAN THE ESTABLISHMENT OF THE 1ST SOVEREIGN SIKH STATE/KINGDOM BY CAPTURING SIRHIND AFTER ELIMINATING THE TYRANT WAZIR KHAN & HIS HINDU BHAMAN ASSOCIATE CHOOTA NAND,SIRHIND WAS DESTROYED BRICK BY BIRCK FOR IT'S CRIMES OF BRICKING ALIVE THE YOUNGER SAHIBZADEH...TODAY HINDUTVA DELHI WILL ALSO FACE A SIMILAR FATE FOR IT'S CRIMES AGAINST THE SIKH NATION - KHALISTAN ZINDABAD