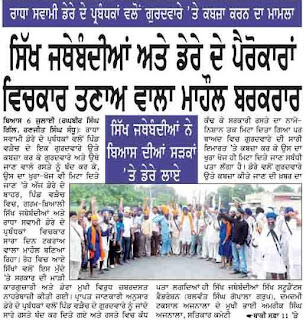 Sikhs gathered peacefully at Guru Nanak Gurdwara Swindon to stop the wedding of a couple which was breaking the Sikh Code Of Conduct the Panthic Rehit Maryada.The maryada states that both the Bride & Groom have to be Sikh and have to have full faith in Sri Guru Granth Sahib Ji as well as have Singh & Kaur in their names in order to have get married in a Gurdwara,this was not the case at the Swindon Gurdwara.This new trend of interfaith marriages in Sikh Places of Worship directly breaks the Sikh Code Of Conduct & tenants set out by Sri Guru Gobind Singh Ji who said the hand of a Sikh daughter should only be given to a Sikh furthermore the Guru Khalsa Panth which has the power vested in it by Sri Guru Gobind Singh Ji & Sri Guru Granth Sahib Ji our eternal Guru has made the decsiion that Anand Karaj Ceremony is only for two Sikhs and no one else.We have no problem if anyone wishes to marry out of the faith,but Sikhs will not allow an Anand Karaj ceremony to happen inside a Gurdwara or anywhere else for that matter as we will not allow Guru Granth Sahib Ji Maharaj be taken to another venue.

If a couple wish to marry they can do so in a Court/Civil marriage - we have no problem.Our Gurdwara committes who are run by leftists the majority of which are a vote bank for the Labour Party continue to try and erode Sikh Tenants be it opening party halls in Gurdwaras which is also breaks maryada to these new interfaith marriages,the quicker we reform our Gurdwaras alongside educating our community the better off our community will be,the media will be doing us no favours and it will always tarnish the Sikh Image but the Sikh Nation will continue to remain in Chardhi Kallah & uphold the Panthic Sikh Rehit Maryada - Sikh Code Of Conduct as set out by our supreme authority Sri Akal Takht Sahib

**BREAKING NEWS**URGENT SHARE WITH ALL - RADHASWAMIS DESTROY GURDWARA IN BEAS PIND VARICH & TAKE OVER THE LAND IN A CONTINUOUS LAND GRAB.. DAL KHALSA INTERNATIONAL DECLARES OPEN WAR ON RADHASWAMIS AS OF NOW!WE URGE ALL SIKH JATHEBANDIA TO JOIN US IN THE STRUGGLE 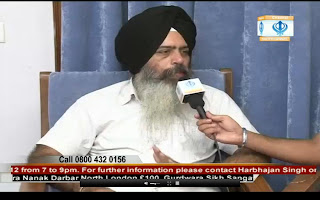 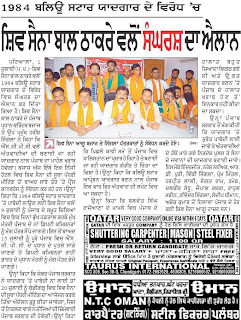 United Sikh Media Canada,speaks about the opposition the Hindutva Lobby of RSS,ShivSena,BJP,Congress and others have regarding the 1984 Sikh Genocide Memorial to be built inside the Sri Harmandar Sahib Complex.These groups have no right to interfere in Sikh Affairs