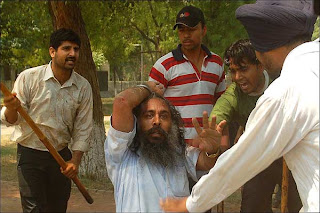 The DSS is based in the town of Sirsa, in Haryana, India, which borders the Indian state of Punjab. The organization propogate facists hindu ideals under a image of a so called (sikh) leader gurmeet ram. Its a hub of propogation of hindutava and traning its terrorists.who in return play the part of followers of the dera who work in ashrams in its many business, which generates wast income. This funds Gurmeet ram and his playboy life style,even his mode of transportation, which is "a fleet of high range cars, protected by up to 100s of private armed bodyguards."nothing less then a head of state.

DSS printed an advertisement featuring Gurmeet ram. This advertisement, coupled with other activities of DSS, demonstrate a deliberate and extremely offensive attempt to copy Sikhi. Specifically, it attempts to copy the creation of "Khalsa," the orthodox manner of Sikhi instituted by the tenth and final Sikh Guru, Gobind Singh. It does this in several ways.

Gurmeet Ram appears dressed in the style of Guru Gobind and seated in "Bir Asaan," the style of seating used by Guru Gobind during the creation of Khalsa. This seating style is still used during Amrit Sanskar, the ceremony in which a Sikh is initiated into Khalsa.Gurmeet ram is portrayed distributing Jaam-e-Insaan, an attempted copy of the Amrit (or nectar) used in Amrit Sanskar. Amrit Sanskar is a vital ceremony in Sikhi. This is when a Sikh is publicly baptized into pure Sikhi and takes the surname "Singh" (or "lion") to denote equality with others in the community. This distribution of Jaam-e-Insaan is also a copy of Khande di Pahul, where nectar is prepared. According to Sikhi, since Guru Gobind only "Panj Pyaras" have the authority to prepare Amrit, which they must do in the presence of Guru Granth Sahib (the Sikh holy book)while following a prescribed method.

Third, Gurmeet Ramincludes a list of "Rules for Humanity" in his advertisement. This is an undeniable attempt to copy the "Rahatnamas" (or "Codes of Conduct") of Sikhi which were instituted by Guru Gobind. While Gurmeet Singh's list of rules are all very similar to those in Sikhi, what is most offensive is his attempt to copy Guru Gobind by issuing such a list.

DSS has also attempted to copy and offend Sikhs and even other religious groups in several other ways . Just as Guru Gobind taught the importance of "Panj" (or "five"), so Gurmeet Singh has copied this concept by using "Sat" (or "Seven"). Dr. Adyita Insaan, the spokesman of DSS, has equated Gurmeet Singh to Sikh Gurus Gobind Singh and Har Krishan, as well as to Ramachandra, a Hindu god. Additionally, DSS deceptively uses the symbols of the four main religions in India to attract followers: the Sikh Ek Onkar, the Muslim Star and Crescent, the Hindu Om, and the Christian Cross.

In summary, DSS has created an amalgam religion which primarily attempts to copy Sikhi and is offensive to Sikhs and those of many other religions. Under Indian law, this deliberate offense is illegal. Indian Penal Code 295a reads: "Whoever, with deliberate and malicious intention of outraging the religious feelings of any class of [citizens of India], [by words, either spoken or written, or by signs or by visible representations or otherwise], insults or attempts to insult the religion or the religious beliefs of that class, shall be punished with imprisonment of either description for a term which may extend to [three years], or with fine, or with both.]"

In a December, 2002 letter to then Prime Minister of India Atal Bihari Vajpayee, a female member of DSS accused Gurmeet ram of sexually exploiting his "Sadhvis," or female followers. The anonymous author of the letter, whose family urged her to become a "Sadhvi," says:

"Two years after I became a 'Sadhvi', a special woman-disciple of Maharaj Gurmeet ram came to me one night at 10 o'clock and said that the Maharaj had summoned me to his room. I felt elated that Maharaj himself sent for me. I was going to him for the first time. After climbing the stairs, when I went into his room, I saw that he was holding a remote in his hand and was watching a blue [pornographic] film on the TV. Beside his pillow on the bed, lay a revolver.... He offered me water and said that he had called me because he considered me very close to him. This was my first experience. Maharaj took me in his embrace and said that he loved me from the core of his heart. He also said that he wanted to make love with me. He told me that at the time of becoming his disciple, I had dedicated my wealth, body and soul to him and he had accepted my offering. When I objected he said, 'There is no doubt that I am God.'"

Gurmeet ram then blackmailed the "Sadhvi" into having sex with him by threatening to kill her and her family. She claims that many other Sadhvis are regularly raped by Gurmeet Singh, saying that her time comes "every 25-30 days." She says other Sadhvis who have tried to reveal their sexual exploitation have been threatened, beaten, and even maimed. This letter inspired an investigation of the DSS by India's central Bureau of Investigation (CBI).

On October 24, 2003 two men riding a motorcycle and claiming to be from DSS shot journalist Ram Chandra Chatrapati four times at point-blank range. Chatrapati was the editor of "Poora Sach" and had been investigating the recent charges of sexual exploitation by Gurmeet Singh. He died of his injuries a month later. Two men arrested on suspicion of Chatrapati's murder said they were DSS followers and had been sent on orders from Kishan Li, a senior DSS official, to kill Chatrapati because of his investigations.

After the mid-May 2007 publication of the offensive DSS advertisement, many Sikhs in Punjab protested Gurmeet ram's attempted copy of Guru Gobind. DSS followers retaliated, assaulting many Sikhs and injuring many of the police trying to calm the situation. Over 100 people were injured by DSS followers, many of them police. They also attacked fire personnel, set a police jeep on fire, and attacked a deputy commissioner's residence. Worst of all,

1. Kamaljit Singh, a Sikh, was killed on May 17th by a bullet fired from inside a Sunam, Punjab DSS compound.

2. On 20th june Friday, Guemeet Ram, who is accused of multiple murders and rapes, was visiting a shopping mall in this north-eastern suburb of Bombay when several Sikh youths protested his presence. In response,gurmeet ram and his bodyguards fired many rounds of ammunition from their assault rifles into the crowd of Sikhs, resulting in the death of Bhai Balkar Singh and injuring dozens of others.

On Friday, personal bodyguards of the criminal Sirsa Sauda cultist Gurmeet Ram Rahim opened fire on a group of Sikhs whom were protesting the Bombay visit of the Sirsa cult leader.

Ram Rahim, who is accused of multiple murders and rapes, was visiting a shopping mall in this north-eastern suburb of Bombay when several Sikh youths protested his presence. In response, his bodyguards fired more than 20 rounds of ammunition from their assault rifles into the crowd of Sikhs, resulting in the death of Bhai Balkar Singh of the Bir Khalsa organization and injuring dozens of others.

The Bombay attack brought back the memory of the 1978 Nirankari Sikh massacre at Amritsar Sahib and Kanpur in which dozens of Sikhs were killed by heretic pseudo-Nirankaris.

According to eyewitnesses the Baba was immediately escorted out of the mall and fled the crime scene within one of the 50 vehicles in his entourage. The news of the attack quickly spread throughout Bombay’s Sikh community, who began blocking traffic in various parts of the city. Sikh activists quickly began to track his caravan and converged to stop the cultists from fleeing.

Realizing the route to the Bombay airport was too dangerous, Ram Rahim‘s 50 vehicle entourage then drove north onto the Pune-Bombay Expressway.