A Powerful Song Which Questions The Betrayal By India Of The Sacrifices Of Sikhs For The Freedom Of India,It Also Speaks Of The Need To Fight Against The Oppression Today Referring To How India Is Killing Sikhs/Destroying Panjab & Sikhism.Revolutionary Heroe...s Such As Mahan Shaheed Sant Bhindranwale,Shaheeds Bhai Jinda/Sukha Have All Fought The Oppression In The Last 26 Years ,Its Up To Us To KEEP THE MOVEMENT ALIVE!
A MUST WATCH BY ALL ESPECIALLY SIKH YOUTHS BOYS & GIRLS 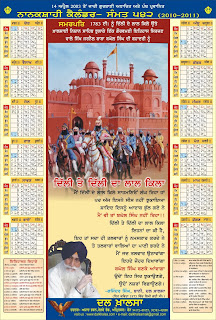 HOSHIARPUR: Rejecting the amended version of the SGPC, the Dal Khalsa Sunday released the Nanakshahi calendar as per original version adopted in 2003 to mark the first day of Nanakshahi Samat 542. The calendar has been dedicated to the great Sikh warrior Baba Baghel Singh.

The occasion was 227th anniversary of the historic event when Sikh warrior Baba Baghel Singh, unfurled Nishan Sahib atop the historic Red Fort in 1783. 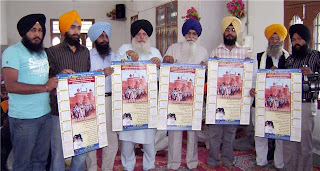 At a well-attended convention at a village gurdwara built in memory of Baba Baghel Singh, Party president H S Dhami said it’s ironic that Badal family has established a monopoly on all important Sikh institutions. “The father and son, who are devoid of ideology are controlling the institutions of historical importance”, he rued.

We categorically reject, once again the changes in the calendar made to appease Sant Samaj and Damdami Taksal, he said. Praising the contribution of Damdami Taksal during the struggle and the supreme sacrifices made by its head Sant Jarnail Singh Bhindrawale and others, he said the performance of present incumbent on many occasions has shamed us.

Taking a dig at present head of Damdami Taksal for entering into a deal with SAD (Badal), he regretted that Baba Harnam Singh has drifted from the path of his predecessors. “Sant Jarnail Singh Bhindrawale and Baba Takhur Singh always kept Badal at arms distance during their lifetime but ironically due to short term gains and lack of vision, the present incumbent has abandoned the ideology of the Taksal.

Dhami revealed that there’s been a package deal between Sant Samaj under Baba Harnam Singh and Badal Dal on three issues- tampering with Nanankshahi calendar, excommunication of Prof Darshan Singh and adjustment of Sant Samaj candidates on 10 seats in the ensuing SGPC elections.

Party spokesperson Kanwarpal Singh rued that the SGPC has killed the letter and spirit of the Nanakshahi Calendar by mixing it with Bikrami calendar, which had its roots in Hinduism. We had mentioned dates of Gurpurabs according to original calendar adopted in April 2003 as we believe that the amended version has an imprint of RSS ideology, he said.

Addressing the gathering Satnam Singh Paonta Sahib minced no words in condemning Shiromani Akali Dal (SAD) for the kind of opportunistic politics it has displayed over the years. Opening a frontal attack on its leadership for corrupting the polity, he expressed the need to replace corrupted lot with morally upright persons for the welfare and betterment of the society.

As the election to the general house of the Shiromani Gurdawra Parbandhak Committee (SGPC) is envisaged in the next few months, the issue of ousting Badal and his coterie from religious domain also came up for discussion.

Another resolutions demanding free access to Pakistan situated Gurdwara Kartarpur Sahib, scrapping of Article 5 of Punjab’s Termination of Agreements Act, 2004 the to checkmate the flow of river waters to non-riparian states, opening of Wagha border on the Indo-Nepal pattern and easing of visa restrictions to Pakistan were also adopted. The resolution was read by party general secretary Dr Manjinder Singh who said his party would send their demands in writing to the government for the implementation.

In pursuit to save Sikh youth from the scourge of drug abuse, SYP president Gurpreet Singh Mann said the organization would undertake programmes in different parts especially rural areas to spread awareness against the increased use of drugs amongst youth.