A Sikhs Warning To Shiv Sena

Sister of a Sikh Marine who was killed speaks out

ON THIS DAY IN 1984 THE HINDUTVA INDIAN GOVT STARTED ITS OPEN SIKH GENOCIDE CAMPAIGN BY FIRING AT SRI HARMANDAR SAHIB,SHAHEED BHAI MENGHA SINGH JI BECAME SHAHEED AS A RESULT....

Shaheed Bhai Mengha Singh Babbar
“True Lord, may my body be a sacrifice unto your feet, Guru, father, may I not show my back in the field of battle, and may I be martyred battling the enemies of the faith. Guru, Father, have mercy on me, may the enemy’s bullets not hit my back, may I take them upon my chest. Satguru, do not think of my faults, please let me embrace your feet.” This was Bhai Sahib’s daily prayer before the Guru.
When the time comes for a Sikh to give his head for the Guru, he is overcome with eagerness. He considers it his great fortune to give his head for the Sikh faith. When it comes time to sacrifice for the faith, the Sikh doesn’t seek any examples, or justifications, or bribes. No force or fear can turn him away from his goal. Living his life according the Guru’s bestowed faith, he fights the enemy and gives his head for the pure faith and truth and is then called a Martyr. Such a warrior always wants that his head should be sacrificed for the cause of the Guru.
On June 1st 1984, the thankless Hindu government directed it’s evil eye towards the Sikh places of worship and Sackhkhand Sri Darbar Sahib, Amritsar. During this attack, Bhai Kulwant Singh Babbar aka. Bhai Mehnga Singh of the organisation Babbar Khalsa had the honour of being the first martyr to die fighting those who would defile the sanctity of Sri Darbar Saahib. Just as Bhai Kulwant Singh aka. Bhai Mengha Singh had the honour of being the first martyr in the Darbar Saahib attack, similarly, Bhai Kulwant Singh Nagoke had the honour of being the first martyr of the Dharam Yudh Morcha. On June 9th, 1982, Bhai Nagoke had every one of his limbs broken and after enduring countless tortures, achieved martyrdom and by doing so, gave the shattered Panth unity to fight together. During this time Bhai Amarjeet Singh Daheru gave his martyrdom and increased the Panth’s fervour to battle.
Shaheed Bhai Kulwant Singh Babbar a.k.a. Bhai Mengha Singh was born in Yumnanagar Jagadhri in 1957 in the house of Sardar Partap Singh located in Vishkarma Nagar. He completed his early education in Yamunanagar. After passing the ninth grade, he entered the ITI and took a year long course in welding and then began to work.
When, during the Vaisakhi of 1978, unarmed Singh’s went to protest the insult of Guru Sahib being done by the fake Nirankaris, the unarmed Singh’s were fired upon and 13 were martyred while countless others were injured.
The spilt blood of the martyrs had a deep effect on Bhai Kulwant Singh and as a result, he began attending kirtan samagams and would long for the blessing of Amrit day and night. By the grace of the Guru during the 1979 AKJ Holla Mohalla Samagam at Anandpur Sahib, he presented himself before the Punj Pyaaray and was blessed with Amrit. Bhai Sahib would read books on Sikh history and would try to mould his life to match those of old Singhs. He would always be consulting with other Singhs on the issue of punishing those who had killed Singhs. When the fake Nirankaris held a meeting in Jagadhri, Bhai Sahib and his companions attacked with fervor and caused the Nirankaris to run away in chaos.
The police lodged a murder case on these Singhs and Bhai Sahib’s companions fought the case with vigor. Bhai Sahib on the other hand refused to fight the case because in his words, “we don’t believe in this false government, so why should we go to courts of a government we have no faith in?” Bhai Sahib was acquitted along with the Singh’s who chose to attend court proceedings.
With a desire to serve the panth and punish the persecutors of the Singhs, Bhai Kulwant Singh left his home and came to Bibi Amarjeet Kaur, wife of Shaheed Bhai Fauja Singh, in Amritsar.

Shaheeds: Bhai Mengha Singh Babbar, Bhai Sukhdev Singh Babbar & Bhai Balwinder Singh Virhing
In September 1979, the Singhs held a camp in which the Singhs, in addition to learning gurmat, also learned weaponry. Bhai Sahib took part in this camp with a desire to learn the use of weapons. During this camp, Bhai Sahib met Bhai Sukhdev Singh, Bhai Kulwant Singh Nagoke, Bhai Sulakhan Singh, Bhai Balwinder Singh, Bhai Vadhava Singh, Bhai Anokh Singh, Bhai Manmohan Singh and many other Singhs. The Singhs who taught the use of weapons loved Bhai Sahib, and they began to stay together in the form of a Jathebandi. All the Singhs had the goal of finding and punishing the killers of Singhs and those who would insult Guru Sahib. The government had no idea who conducted these actions.
The government began to hunt the Singhs and as a result, the Singhs went underground. Only a few days had passed in hiding when this beloved of the Guru, Bhai Kulwant Singh, left to bathe in Sri Ramdas Sarovar and have darshan of Guru Sahib. He exclaimed “if the olden Singhs could cut through the cordon of their enemies, to have ishnaan and darshan at Darbar Sahib, so can I.” Even during this time in hiding Bhai Sahib would rise at Amrit vela, bathe in the sarovar and then attend Aasaa Dee Vaar kirtan at Darbar Sahib. After this, he would attend to the seva of the Singhs langar and also The Jora Ghar in addition to arranging weapons for the Jathebandi.
On June 1st 1984 at around 12pm, the CRPF and the BSF, in a government-sponsored scheme to eliminate the Sikhs, opened a rain of fire upon the Singhs at Sri Darbar Sahib, Darshani Deeorhi, Langar Building and Sri Akal Takhat Sahib. Bhai Sahib was at Baba Atal Sahib and took up a position there, killing three attacking soldiers. This warrior’s confidence increased and he went up to the top most floor of Baba Atal. A sniper fired at Bhai Sahib and the bullet hit him in the forehead. Bhai Sahib fell to the ground, but when a nearby Singh asked “Mengha Singh!!! How are you??” he replied “Chardi Kala!!!”
The Singh’s were informed that Bhai Sahib had been hit and Bhai Manmohan Singh and others were sent to retrieve him. The Singh’s with great effort in the rain of bullets brought Bhai Mengha Singh down from the top most floor of Baba Atal and carried him to Guru Nanak Nivas. There were no medical facilities or doctors, but the Singh’s cleaned the wound and dressed it. Around this warrior Gurbani began to be recited and only after the completion of Sukhmani Sahib did he go and take his place at the feet of the Guru. On one hand, the Singhs were fighting the enemy and on the other, some Singhs were taking care of the Shaheed’s body. Jathedar Sukhdev Singh Babbar asked the Gurbani continue to be recited.

Bhai Mengha Singh Babbar Shaheedi Saroop
All the Jathebandis in the complex, upon hearing the news of the Shaheedi did a final ardas for Bhai Mengha Singh, and upon seeing the Shaheed for the final time, heaped praise upon his bravery. Whoever meditates upon the Guru with a pure heart, for certain, gets the reward. May we be a sacrifice unto this first Shaheed, this blessed soul. This was the first Shaheed who’s body was cremated in the Darbar Sahib complex, despite the protestations of the SGPC president. Bhai Sahib was cremated close to Sri Manji Sahib.

12 SIKHS BATTERED 80 SHIV SENA HINDUTVA TERRORISTS IN TARN TARAN FOR REMOVING THE DASTAAR OF A SIKH. 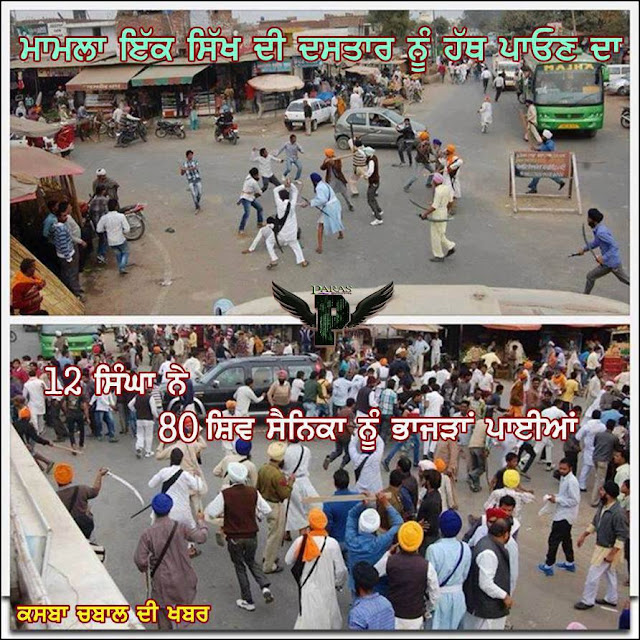 JATHEDAR RAJOANA'S COURT STATEMENT FROM YESTERDAY'S COURT APPEARANCE IN THE FALSE CASE AGAINST HIM..LISTEN TO FIND OUT HOW THE FALSE WITNESSES WERE IN SHOCK!! PLS SHARE 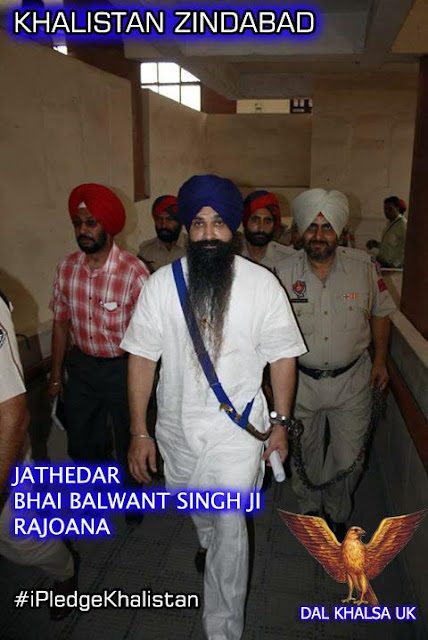 Sikhs Pay Their Respects To Lee Rigby In Woolwich 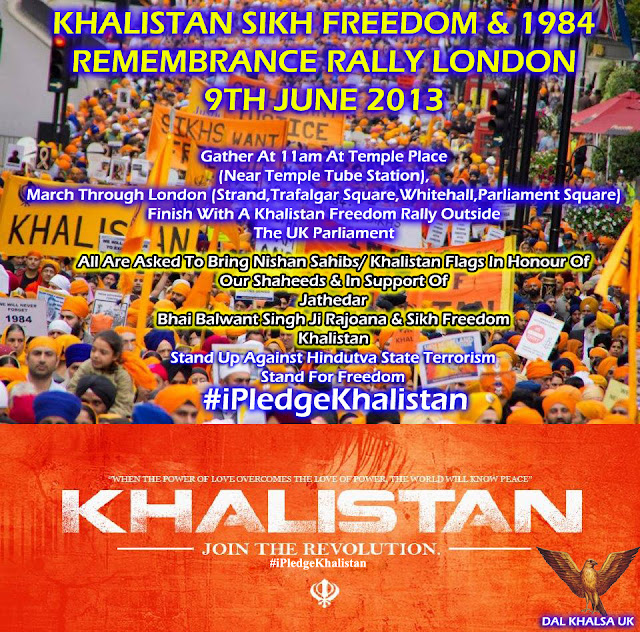 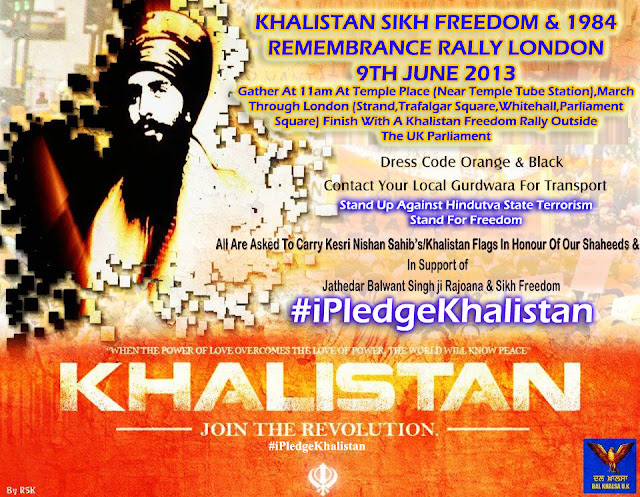