WE SALUTE KAUM E SHAHEED - SHAHEED BHAI DILAVAR SINGH JAISINGHVALA ON HIS SHAHEEDI DAY,ON THIS DAY BHAI SAHIB GAVE HIS LIFE BY ELIMINATING THE GENOCIDAL KILLER OF SIKHS CM BEANT IN CHANDIGARH,JATHEDAR RAJOANA SAW HIS BEST FRIEND FOR THE VERY LAST TIME & WATCHED HIM BECOME SHAHEED IN FRONT OF HIS EYES...GREAT ARE BOTH THESE SON'S OF PANJAB & THE SIKH NATION WHO'S FRIENDSHIP WILL LAST FOREVER....BY ELIMINATING CM BEANT, BHAI SAHIB SAVED AN ENTIRE GENERATION OF SIKHS ...SHARE THIS PIC 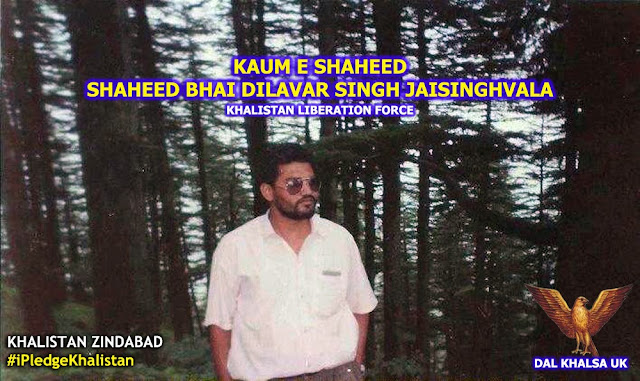 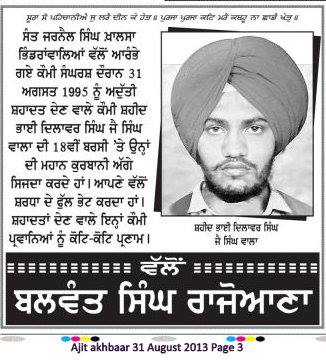 SATINDER SARTAAJ WHO HOB NOBS WITH GURD-ASS MANN BOWING DOWN TO THE PRESENT NARKHDHARI (NIRANKARI) GURU,THE NARKHDHARIS WERE RESPONSIBLE FOR THE VAISAKHI MASSACRE OF 1978 IN WHICH 13 SIKHS DIED..COUNTLESS INJURED 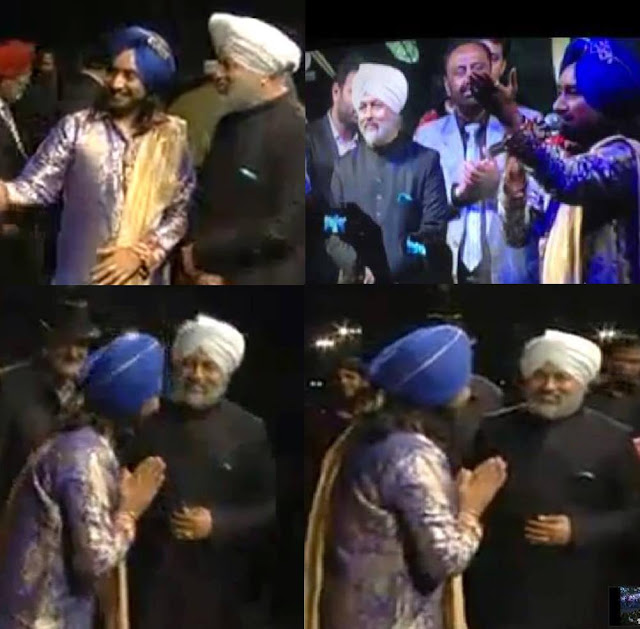 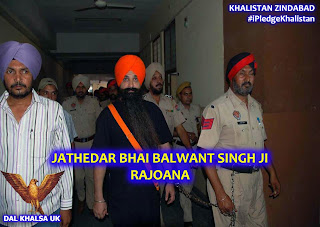 Party spokesperson Kanwar Pal Singh in a statement took exception over the Centre’s decision to release the postal stamp of Beant Singh, as a mark of tribute to him on his 18th death anniversary. He said the centre’s move tantamount to rubbing salt on the simmering wounds of the Sikh people. He claimed that Beant Singh was wrongly credited with uprooting militancy and added that rather he was discredited with the killings of large numbers of youth both connected and unconnected with Khalistan movement.

“The Sikhs at large considered him as violator of Sikh human rights as it was during his regime that killings of youth in fake-encounters was order of the day”, Kanwarpal pointed out. He also urged the SGPC and DSGMC to lodge their protest with Centre for releasing the postal stamp of Beant Singh an “authoritarian ruler” whose regime was “illegal” and who even targeted agitating Akalis in a ruthless and cruel manner.

He said the Sikhs revered Bhai Dilavar Singh Jaisinghvala– a human bomb that killed Beant Singh on 31st August 1995, as their “quami hero”. We, the Sikhs would be performing Ardas in memory of Dilawar Singh at Akal Takht commemorating his 18th martyrdom day as “the Jathedar Akal Takht on March 23 last year has declared Dilavar Singh Jaisinghvala, a “quami martyr” and death row convict Bhai Balwant Singh Rajoana a “living martyr”, both assassins of Beant Singh. He called upon the Sikhs to reach Akal Takht on 31st August to pay glowing tributes to Dilawar Singh. 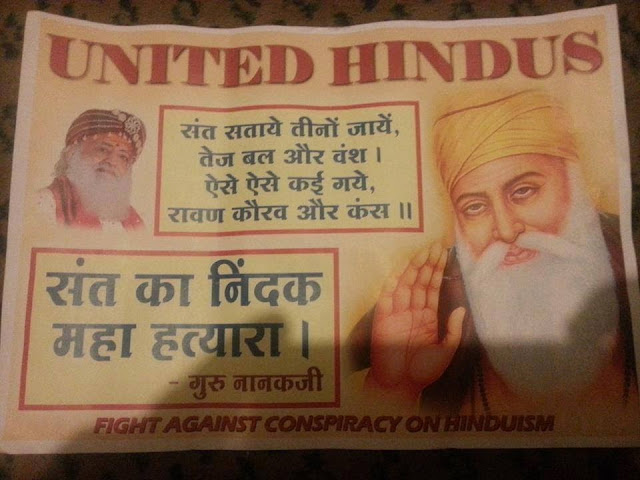 OUR PARTNER US MEDIA CANADA

SPOKESWOMAN FOR ASSA RAM A RAPIST HINDU PAKHANDI COMPARES SRI GURU NANAK TO THE RAPIST..SHE MAKES A LIE THAT SRI GURU NANAK'S KIDS WERE FRIED IN A PAN - THIS NEVER HAPPENED!! THE DELHI GURDWARA COMMITTEE CLAIM THEY'VE COMPLAINED TO THE COPS