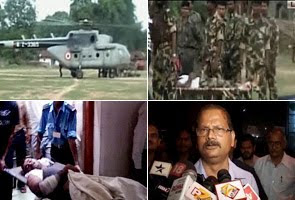 Twenty-six personnel of the 39 Battalion of the Central Reserve Police Force were killed in a Maoist ambush in Chhattisgarh's Narayanpur district on Tuesday.It seems that the government has failed again. the policy of going to war against our own people is the main reason behind these Naxal operations,instead of listening to people and their regional demand,use of brute force has been the Central policy.

CRPF jawans are human beings so are the Naxal,seeing this again and again does make us any happier as a human rights group.When will the regime learn that they have failed and that they must engage in dialogue rather then brute force.This is a prime example of a regime detached form its own people.Decentralisation of power is the key to these movements for a democratic life the Naxals,Sikhs and Kashmiris.

26 CRPF men killed in Chhattisgarh
Aman Sethi
Death toll in Maoist ambush expected to rise
— PHOTO: PTI An injured CRPF jawan being treated in hospital after his battalion was ambushed by Naxalites in Narayanpur district on Tuesday.
Raipur: Twenty-six personnel of the 39 Battalion of the Central Reserve Police Force were killed in a Maoist ambush in Chhattisgarh's Narayanpur district on Tuesday. “At present we can confirm only 26 deaths,” said CRPF Inspector-General Vijay Raman. “We shall be in a position to give a final figure only once all the troops returned to the camp.”
“We also lost a CRPF officer, Assistant Commandant Gulati, in the ambush,” said another source in CRPF intelligence, adding that “the toll was expected to rise.” About 70 CRPF personnel were conducting a Road Opening Operation (ROP) on foot on the Narayanpur-Orcha road when the attack occurred.
At least two critically injured policemen were evacuated to Jagdalpur by helicopter.
Officials told The Hindu that the soldiers were still making their way back to their camp.
Maoist bandhLocal journalists in Narayanpur said the attack occurred in the backdrop of a two-day bandh called by the Communist Party of India (Maoist).

Sources said the attack took place near a hilly stretch known as the Jhadha Ghati, 3 km from Dhudhai. According to a PTI report, Maoist fighters opened fire from a hilltop as the soldiers were returning from their patrol.“A large number of Maoist fighters surrounded the rear section of the CRPF party and opened fire,” said a source.The Narayanpur-Orcha road is considered the gateway to Abujhmad, a 4000-sq. km. forested area that has been declared a “liberated zone” by the CPI (Maoist).In past years, the onset of the monsoon usually marked a reduction in the number of encounters. This year, however, police officials indicated that search operations would continue despite the inclement weather.
String of attacks
On April 6 this year, 75 CRPF soldiers and a head constable of the Chhattisgarh police were killed in an early morning ambush in Dantewada district. On May 8, eight men of the CRPF were killed in Narayanpur when naxals blew up a mine-proof vehicle.