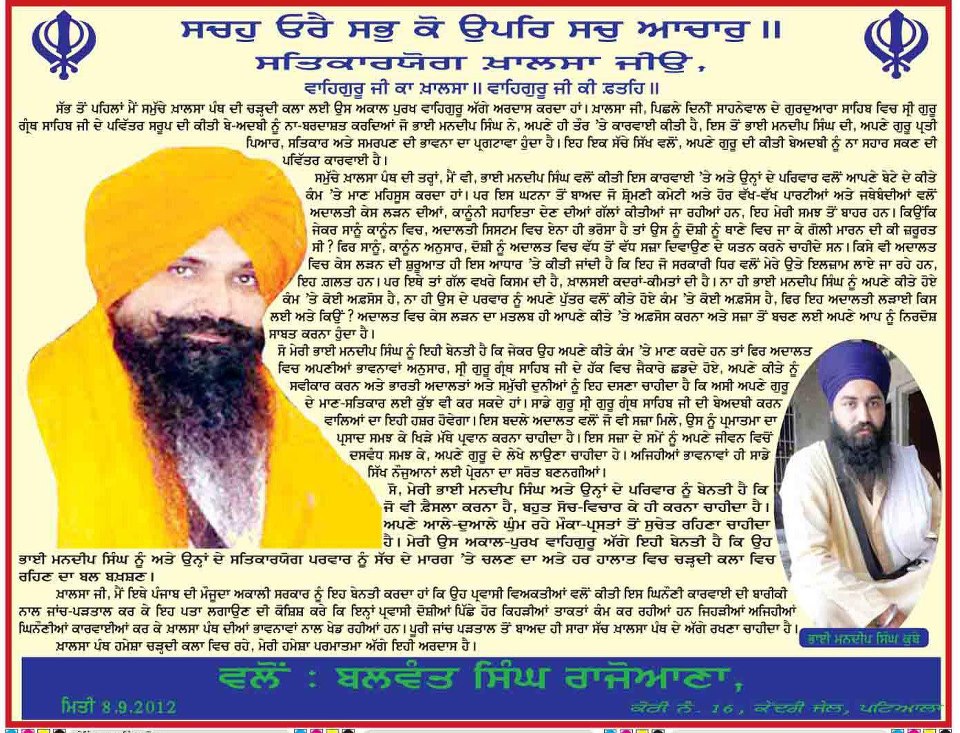 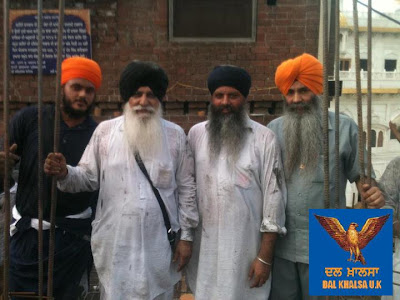 HINDU ATHVADHI TERRORIST INSULTING THE SIKH NATION IN THIS VIDEO

HINDU ATHVADHI TERRORIST INSULTING THE SIKH NATION IN THIS VIDEO

WE PAY HOMAGE TO MAHAN SHAHEED BHAI JASWANT SINGH JI KHALRA WHO ON THIS DAY IN 1995 WAS ABDUCTED TORTURED & KILLED BY THE HINDUTVA POLICE IN PANJAB.BHAI SAHIB EXPOSED THE SIKH GENOCIDE THROUGH HIS EXTENSIVE INVESTIGATIONS & CAMPAIGNS IN THE END HE ALSO BECAME A VICTIM OF THE VERY GENOCIDE HE WAS EXPOSING... WAHEGURU 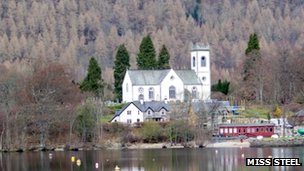 Maharajah Duleep Singh buried his infant son at Kenmore Parish Church in August 1865
A gathering is to take place at a church in rural Perthshire to mark the restoration of the gravestone of a child who would have inherited the Sikh empire.
In 1865, Maharajah Duleep Singh buried his son at Kenmore Parish Church.
The Maharajah was the Sikh empire's last ruler and was exiled to the UK when his kingdom was annexed by the East India Company in 1849.
The event has been organised by the Anglo Sikh Heritage Trail (ASHT).
At its height the Sikh Empire was over twice the size of the United Kingdom and was based around the Punjab region of India.
Scottish relocation However, a bloody war with the East India Company saw it eventually annexed and Maharajah Singh was exiled to Britain at the age of 10.
His friendship with Queen Victoria however, led to the former Indian royal moving to Scotland in 1855 under the guidance of his guardian Sir John Login.
It was in Scotland that he converted to Christianity.
The gathering at Kenmore Church on Thursday at 14:00 BST marks the end of restoration work on the grave of the Duleep Singh's infant son, who died in August 1865 less than a day old.
'Born an heir' The work was commissioned by Kenmore parish church and the local project Kenmore in Bloom, with a financial contribution by ASHT on behalf of the Sikh community.
Harbinder Singh, director of the ASHT, said: "Despite this remote location the tragic obscurity surrounding this infant child remains a fact that he was born an heir to the Sikh kingdom.
"His grandfather Ranjit Singh and father Duleep Singh remain potent symbols not only of our heritage but also of the defining period in history which forged the current ties between Sikhs and the UK."

Sikh Student Has Hair Cut In School In Kapurthala Panjab

The illuminati Exposed By Muammar Gaddafi

**URGENT!! URGENT!!!!BREAKING NEWS FROM PANJAB** GURDWARA SAHIB WAS ATTACKED IN HOSHIARPUR ,PIND KHANPUR A PERSON NAMED SURESH KUMAR SON OF OM PARKASH AN 'AD DHARMI' SO CALLED RAVIDASIA ATTEMPTED TO BURN THE GURDWARA DOWN BY BURNING GUTKA SAHIB'S DOOR MATS & FURNITURE ... THIS MAN WAS ALSO DRUNK LIKE THE ONE WHO ATTACKED GURU GRANTH SAHIB JI IN LUDHIANA A WEEK AGO..THAT MAN WAS SHOT BY BHAI MANDEEP

SINGH ..THIS IS A CONTINUOUS CAMPAIGN BY THE RSS HINDUTVA INDIAN AGENCIES AGAINST SIKHS ACROSS PANJAB ASK YOUR FAMILIES TO BE ARMED & DEFEND THEIR LOCAL GURDWARA - WATCH SIKH CHANNEL 840 NOW!! FOR MORE INFO!!! SIKHS WILL BE FORCED TO TAKE ACTION THE SIKH NATION WILL NO LONGER TOLERATE THIS!WHY DON'T THESE DRUNKARDS BURNS THEIR OWN HOUSES DOWN?? THE REASON IS THAT THEY HAVE BEEN SENT THE BIBLE NEVER GETS BURNED IN PANJAB NO OTHER SACRED SCRIPTURE DOES BUT GURU GRANTH SAHIB JI IS BURNED THROWN IN WELLS TORN APART AND THROWN ON THE FLOOR 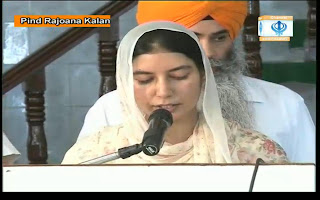 Bhai Gajinder Singh
Ludhiana (September 02, 2012): A Delhi based Indian Court is reported to have issued “non-bailable” warrants against five Sikhs who were involved in hijacking an Air India plane to Pakistan in 1981. It is notable that only two of the five persons currently reside in India.
According to reports the warrants against five Dal Khalsa mean were issued on August 30, 2012 after Additional Chief Metropolitan Magistrate (ACMM) Sameer Bajpai took cognisance of Dehi Police charge-sheet filed in the case in 2011.
It is notable that a Pakistan court had already held the trial in this case and the alleged accused have undergone the punitive imprisonment awarded by the court in this case.

Bhai Satnam Singh Paunta Sahib
India want these Sikhs to face a fresh trial for alleged other offences than those they had been earlier convicted of and sentenced to. Indian court has fixed the matter for further hearing on October 15.
“In my opinion, there is sufficient material to proceed against the accused persons. I, therefore, take cognisance of the offences under sections 121 (waging war against Government of India), 121A (conspiring to commit certain offences against the state), 124A (sedition) and 120B (criminal conspiracy) of the Indian Penal Code (IPC),” the judge is reported to have said.
It is notable that September 29, 1981 an Air India flight from New Delhi to Srinagar was hijacked and forced it to land in Pakistan. Hijackers were arrested by Pakistan police and were sentenced life terms by a court there.

S. Karan Singh
It is notable that Bhai Gajinder Singh, a resident of Chandigarh is the patron of ‘Dal Khalsa’, a political body.
It is notable that Bhai Gajinder Singh, after serving his sentence in Pakistan, did not return to India. He reportedly went to Germany in 1995 and was detained at an Airport there. The government asked Germany to handover Gajinder Singh to India but Germany did not oblige India as it said that Gajinder Singh, would be deported to from where he had come. He is still abroad, but where, nobody knows.
Two others Karan Singh a resident of Srinagar in Jammu and Kashmir and Jasbir Singh Cheema, a resident of Khanna in Punjab are said to be in Switzerland since 1995. Both have got asylum in Switzerland, it has been learnt.
Satnam Singh Paonta Sahib is an ex-president and a senior leader of Dal Khalsa. He belongs to Paonta Sahib and after serving his sentence in Pakistan had gone to USA where he had sought asylum. However, his request for asylum was denied and he was deported back to India in the year 2000.
The fifth Sikh hijacker is Tajinder Pal Singh, who after serving his sentence in Pakistan had gone to Canada and filed a petition for asylum. He tried the same for 4 years but was deported back in 1999 after the rejection of his petition for asylum.
It may be recalled that after Satnam Singh Paonta Sahib got deported to India he approached a court here seeking quashing of the case registered here in the case of hijacking the plane. He pleaded that he could not be put on trial for the same offence twice as per the principle of double jeopardy.
The police later approached another court here with a charge sheet filed against the five under the charges of waging war against the country, conspiracy and various other offences.
The magistrate has now ordered that the accused would have to face fresh trial here in the same case but for different offences. He ruled that the principle of double jeopardy does not apply as the offences for which they were tried and convicted in Pakistan and for which the present charge sheet is filed are distinct and separate.