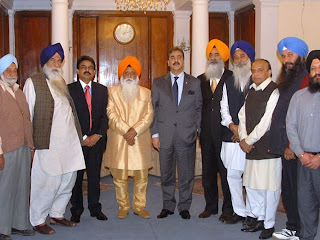 LAHORE: A delegation of Sikh representatives met with Prime Minister Yousuf Raza Gilani on Saturday and presented him with a list of their demands.

The prime minister reiterated his government’s commitment to protecting the rights of minorities and women. Indian Sikh leader Sardar Swinder Singh complained to the PM stating the Evacuee Trust Property Board (ETPB) had sold land belonging to the Gurdwara Ramdas at Choona Mandi. Singh said that the construction of a plaza on the plot of land had already started.

“In the Sikh religion, the land of any gurdwara is never sold and only another gurdwara can be built on the land,” Singh said.

Gilani immediately asked ETPB chairperson Asif Hashmi to stop construction on the proposed plaza and assured the Sikh community that the land would be restored to them.

Sardar Swinder Singh also told the prime minister that some influential locals had encroached upon the land of Gurdwara Bhai Taro Singh at Naulakha Bazaar. The PM assured him that the land would be re-possessed and returned to the original owners. Asif Hashmi informed the PM that some clerics had occupied the gurdwara’s land and that he would try to resolve the matter amicably.

Singh said that PM has assured him that all gurdwaras in Pakistan would be made functional. He also asked the PM to allow members of the Sikh community to celebrate all their religious events in Pakistan.

He said that the PM had assured the delegation all efforts would be made to grant this wish. Prime Minister Gilani told the Sikh community that if India granted Pakistan permission to establish a counsulate at Amritsar the Sikh community would get visas for Pakistan more easily.

Singh demanded that visas be issued to all Sikhs’ whose passports said that they were born in ‘undivided India’. Gilani asked ETPB’s chairman Asif Hashmi to ensure that Sikhs who were born in Pakistan before partition were issued visas on a priority basis. The Sikh community’s demand to be provided residence in Lahore was accepted by the PM.

“The government believes in promoting inter-faith harmony and the relations between the Sikh and the Muslim communities in Pakistan are a very good representative of our commitment,” Gilani said.

LAHORE, Nov. 27 (APP)- Prime Minister Syed Yusuf Raza Gilani reiterated that minorities and women were his constituency and his government was committed to protecting their rights.Talking to a select group of Sikh leaders, who are visiting Pakistan to participate in birth anniversary celebrations of Baba Guru Nanak, at State Guest House here Saturday, he said the welfare of minorities was not only religious obligation but also a political commitment.The Prime Minister said the government believed in promoting interfaith harmony and the relations between Sikh and Muslim communities in Pakistan was a good example.

Gilani also assured the Sikh leaders of considering their suggestions on various matters. He especially mentioned the policy to maximum visas on religious occasions of followers of different faiths, who visited Pakistan particularly Sikhs and Buddhists. Pilgrims help develope people-to-people contact and better understanding among communities, he observed. The delegation appreciated government efforts to improve travel facilities as well as conditions of Gurdwaras and shrines in Pakistan. They also mentioned that Langer Khana at Punja Sahib had become one of the best in the subcontinent after its renovation by the Pakistan government. The delegation lauded efforts of the Evacuee Trust Property Board (ETPB) Chairman Asif Hashmi for resolving issues of the Sikh community in Pakistan. They mentioned that they had great regard for the Prime Minister as they were given a special opportunity to meet him whenever they visited Pakistan. They said they attached special importance to the meeting as forefathers of the Prime Minister had laid the foundation stone of the Golden Temple. The Sikh delegates also appreciated that most conversation during the meeting was in their language. Federal Minister for Minorities Shahbaz Bhatti and ETPB Chairman Asif Hashmi were also present.