London, United Kingdom (May 08, 2014): According to a written statement sent to the Sikh Siyasat News (SSN) by the All India Sikh Students Federation (AISSF): [a]t a packed venue at the Houses of Parliament in London on May 06 senior leadership figures from national freedom movements gathered in an impressive show of solidarity to demand UN action against those states that forcibly suppress legitimate self-determination movements. Resolutions also calling for guilty states to be taken to task and for the creation of international criminal tribunals to punish those guilty of systematic mass abuses were unanimously passed. Lord Nazir Ahmed hosted a Conference which was supported by a number of other UK Parliamentarians, led the calls for self-determination to be promoted without fear or favour. Conservative MP Richard Harrington spoke of his own commitment, as a Jew, to the cause of Palestinian self-determination and for all other nations. Stephen Twigg MP, Chair of the All Party Group against Genocide and Crimes Against Humanity gave the organisers a substantial statement supporting efforts to promote self-determination as a critical means to prevent such crimes. John Hemmings MP also told the Conference that self-determination for all peoples was a humanitarian imperative which the UK Government must adopt in order to formulate a credible foreign policy.

Karnail Singh Peermohammed, President of the All India Sikh Students Federation, who had travelled from the Sikh homeland especially for the event, spoke of the Sikh nation’s suffering since the Indian army attack on the Harimandar Sahib (Golden Temple) in June 1984. After experiencing genocide the Sikhs had resolved at their national gathering (Sarbat Khalsa) in 1986 to secure independence but that struggle too had been violently suppressed. The Sikhs he said, want the international community to intervene in the Indo-Sikh conflict and ensure that Sikh rights under international law were respected – especially the right of self-determination in the form of a sovereign state . He demanded the release of all Sikh political prisoners in India and war crimes courts for those guilty of Indian war crimes to be punished. He presented Lord Ahmed and Ranjit Singh Srai with a replica of an historic Sikh coin which was struck when the first Sikh sovereign state was established in the 1700s.

Labour MP Fabian Hamilton sent a message in which he noted that “Sikhs have long wished for self-determination in Punjab”. He described the 1984 Indian army action as “an unforgivable desecration of life and of the holiest place of the Sikh People”. As to UK involvement in that attack he called for a full investigation so that the truth behind that “terrible act” could be known.

Syed Ali Geelani, Chairman of the Hurriet Conference sent a message from Kashmir which called for the immediate involvement of the people of Kashmir in the only process that has any credibility and any hope of resolving the claims to the disputed territory i.e. self-determination. This was supported by Professor Nazir Shawl who called for all aspirant nations to unite to pursue their international rights until justice and freedom was secure.

The Naga leadership from their homeland sent a message delivered by Frans Welman of the International Naga Support Centre; they said they would never accept alien rule and yet lamented that 17 years of negotiations with India had not produced any results, as the Indians are using the negotiations as a counter insurgency strategy rather than an opportunity to solve the conflict. Again they called for international intervention.

The Conference heard, time and time again, that India’s official refusal to accept Article 1 of the 1966 International Covenant on Civil and Political Rights, which guarantees the right of self determination, was the root cause of these bloody conflicts. It was urged that the UK Government’s policy toward India be reviewed such that India comply with international law – something which the UN Human Rights Committee has tried and failed to do.

Participants from around the world also spoke on the freedom struggles in Palestine, Tamil Eelam, Kurdistan, Western Sahara, South Cameroon and commentators on the Scottish independence referendum also addressed the gathering which was keenly attended by many community leaders from Diaspora communities.
Participating Sikh organisations included the Council of Khalistan, Dal Khalsa, Akali Dal UK, Kesri Lehar, Akali Dal (Amritsar) as well as others. They thanked Lord Ahmed for his efforts and pledged to defeat Indian colonialism in their beloved Punjab homeland. Amrik Singh Sahota, OBE expressed deep appreciation for Karnail Singh’s robust and inspiring contribution.

Resolutions passed at the PNSD Conference held at Westminster on 6 May 2014:

1. This Conference calls on the international community to make the right of self-determination a primary driver of policy making so that intractable disputes involving the destiny of regions across the world may be resolved through peaceful and democratic means, in accordance with international law. The UN and its member states are obliged to promote this fundamental, collective human right which ultimately is the real safeguard for individual human rights.

2. This Conference calls on the international community to establish international criminal tribunals to hold to account those who have carried out massive systematic human rights abuses in order to crush lawful struggles for self-determination including in Punjab, Kashmir, Kurdistan, Tamil Eelam, Southern Cameroon, Palestine, Western Sahara, Nagalim and elsewhere. Impunity for crimes including genocide cannot be tolerated in a civilised world and the rule of law must be restored so that nations may freely determine their destiny in their homeland.

3. Those states, such as India, that have formally objected to the right of self-determination (as set out in Article 1 of the 1966 Covenants on Human Rights) being applicable to nations within their current borders must be brought into line by the UN in order to enable those nations to freely exercise their right of self-determination. We call on the UN General Assembly to adopt a resolution exposing those states that brazenly reject such a fundamental provision of international law and which thereby create a threat to international peace and security.

4. The Thatcher government’s involvement in the planning of India’s Operation Bluestar against the Sikh Harimandar Sahib (Golden Temple) in Amritsar in June 1984 has been universally condemned. We call on the UK Foreign office to urgently review its foreign policy so that it supports the right of self-determination instead of conspiring with states that breach international law in suppressing legitimate self-determination movements. As a starting point it should support an international, UN led, enquiry in to the genocide that was carried out against the Sikhs between 1984 and 1995. 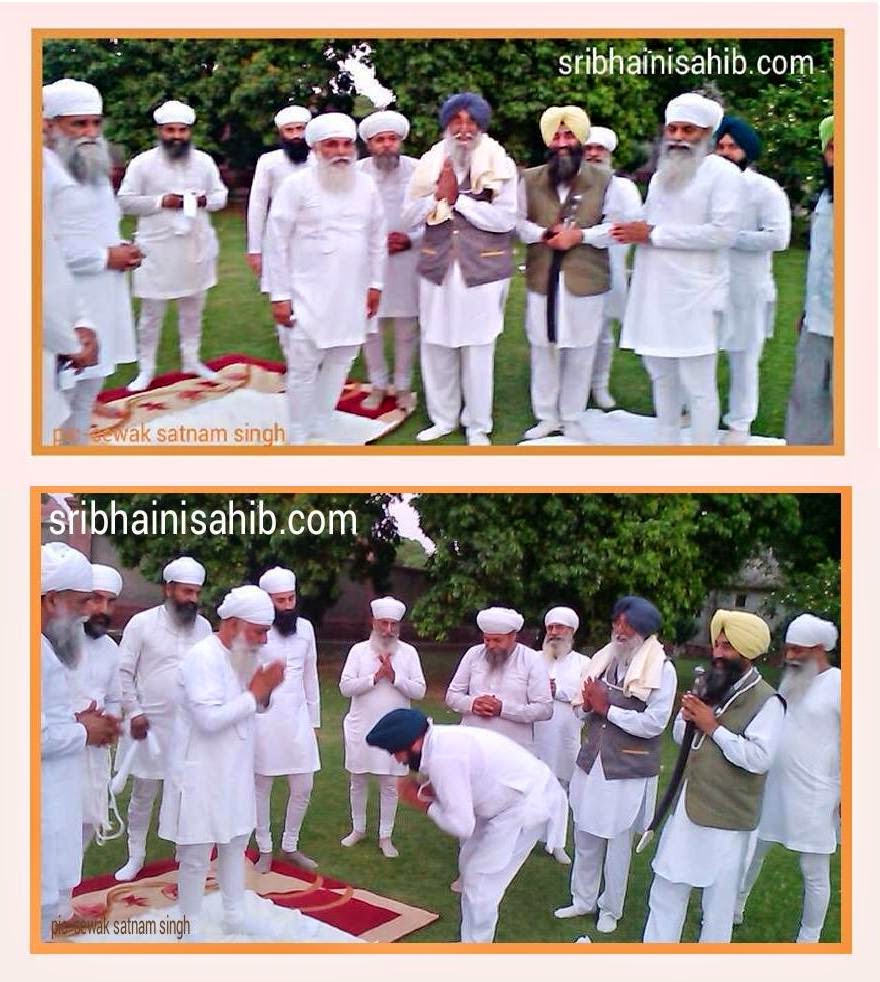 Simranjit Singh Mann hits a new low 1st the Pakhandis Sants along with him met and became friends with the Radhaswami Guru , now they're hanging out with one of the new Pakhandi Namdhari Gurus...

Khalistan Day 2014 At The House Of Lords PNSD Conference

Khalistan Day 2014 was celebrated at the House Of Lords on the 6th of May 2014,organised by Parliamentarians For Self Determination (PNSD),Lord Nazir Ahmed & Ranjit Singh Srai (Secretary PNSD/Council Of Khalistan). 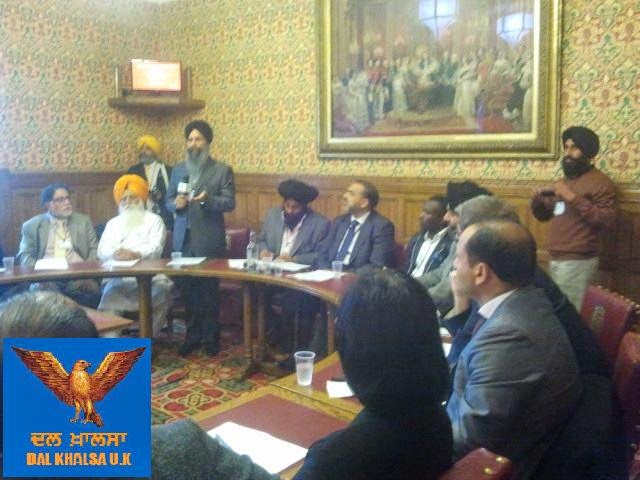 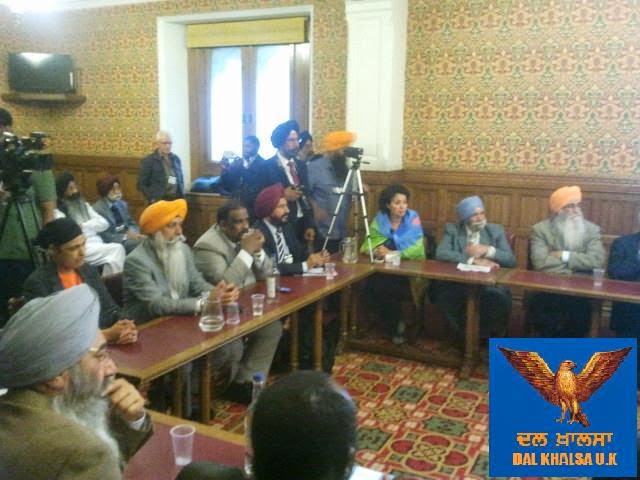 The topic of the day was Conflict Resolution Via Self Determination Speakers included S.Manmohan Singh Khalsa,Gurdev Singh Chouhan & many other Sikh & non Sikh leaders representing the following organisations/nations fighting for freedom: 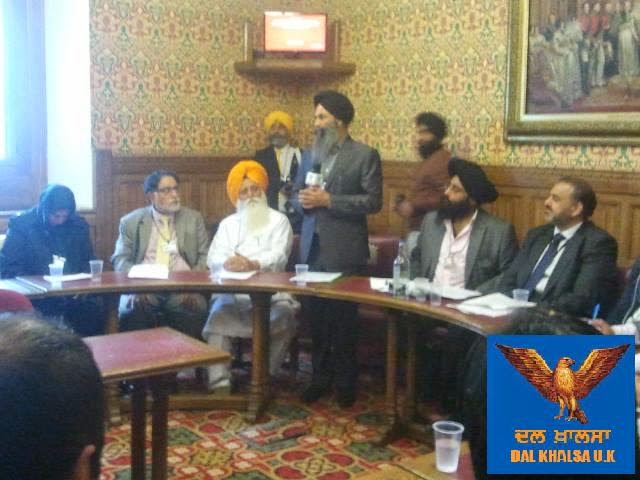 While international law under the UN Charter gurantees the right to self determination,countries such as India have put reservations in,saying that this does not apply to peoples living within their borders.This is a blatant rejection of a basic Human Right to determine a peoples own destiny. 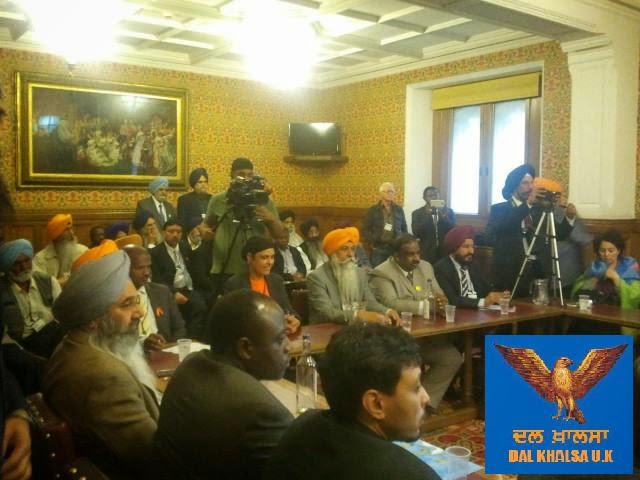 Many speakers talked about how their own communities had been oppressed & denied freedom,but alongside those tragic stories,there was also hope in that the fight for freedom shall continue under a united front of all nations seeking freedom & justice via Self Determination.