Raj Kakra's latest song Rajneeti which talks about the injustice & continuing injustice Panjab is suffering since 1947 - 1984 till the present day.The song is similar to Babbu Mann's Kaum Deh Heere and talks about how Panjab has been destroyed in all manners by Indian State Terrorism against the Sikhs by the Fanatical Hindutva forces who want a pure Hindu state Hindi,Hindu,Hindustan.

Dal Khalsa fully endorses the track and applauds Raj Kakra for writing such a thoughtful track with deep meanings behind each verse.Dal Khalsa applauds Raj Kakra alongside other artistes like Babbu Mann,Gurminder Guri & Ranvir Dosanjh,who have all recently made tracks and started the trend of tracks which express Panthic Dardh,Honour our Shaheeds from 1984 onwards alongside exposing the Indian State for how it has commited genocide on the Sikh Nation and how it is working to continuously destroy Panjab and the Sikh Nation.These songs are doing a great job in awakening the Sikh Masses of Panjab and the World Over and we fully appreciate the hard work and effort that goes in to making them.


Dal Khalsa International's Vice President Manmohan Singh Khalsa (Dal Khalsa UK) has arrived in Pakistan to evaluate the situation in regard to the brutal beheading of a Sikh in West Pakistan's Tribal Area.

Manmohan Singh Khalsa(UK) Has Reached Pakistan to take stock of the situation, meet the aggrieved families and government officials.
Dal Khalsa International Is In Continuous Communication With The Pakistan Govt. & Stands Shoulder To Shoulder Pakistan & Its Govt. In the Fight Against Terrorism & The Taliban

AMRITSAR: Sikh groups, including Khalsa Action Committee, Dal Khalsa and others have issued appeals for the protection of their brethren in Pakistan’s tribal region.

Provoked by the beheading of Jaspal Singh and murder of another Sikh after their families failed to fulfill Taliban’s demand for One crore jaziya (tax on non-Muslims), leaders of Sikh groups expressed their concern to Pakistan government in a communication, routed through Pakistan’s high commissioner in Delhi.

Bhai Mohkam Singh and Kanwar Pal Singh has written to the Pakistan government conveying "the community’s pain and anguish on the mindless killing of Jaspal Singh in tribal area and expressing solidarity with Pakistan in its fight against the Taliban."

Expressing shock over the gruesome incident, the letter faxed to High Commissioner Mr Shahid Malik reads: The recent killing has traumatized the Sikhs who have been living in the atmosphere of fear and depression since long. Sikhs in Pakistan are a tiny minority and unlike other countries, their role and presence is negligible in country’s polity.

Citing "the strong cultural bonds between the Sikhs and the Muslims of this region and the process of reconciliation initiated some years ago," the letter has appealed for "stringent and stern" action against those responsible for the recent killings. They also urged the Pak government to do its best to ensure the safety of other two who were said to be still in the custody of the Taliban.

Dal Khalsa stands in unity with the Christians of Panjab 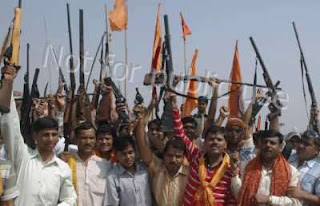 Dal Khalsa stands in unity with the Christians of Panjab who are at this time suffering attacks from Hindu Fascits like Shiv Sena & the RSS.Christians are outraged at an objectionale picture of Jesus being published by Hindu Extremists.Time and time again we have seen Hindutva Nazi supporters like the Shiv Sena challenge minorities across India such as Sikhs,Muslims and Christians along with the publication of offensive pictures of the leaders of these faiths showing them as Hindus.We fully understand and stand shoulder to shoulder with the Christians in Panjab who have had their Churches burned alongside property and cars damaged in full scale disturbances across the State.

After the anti Christian attacks/genocide in the east of India the anti Christian stance seems to have now come to Panjab with Churches being attacked and burned.Sikhs are no strangers to seeing their Guru's being shown in a degrading manner by these fanatics who want nothing more than a pure Hindu nation of Hindi,Hindu,Hindustan - Hindutva.They aim to achieve this by attacking minorities in to submission through false propaganda and violence to achieve their aims.We fully condemn the brutal violence unleashed in Panjab once again by these Hindutva Terrorists who after supporting attacks on Sikhs in December and before are now attacking another minority - the Christians.We ask all Sikhs and Sikh organisations to stand shoulder to shoulder with another minority which is suffering just as we are within the so callled democracy.
India.http://www.mynews.in/News/Indefinite_curfew_clamped_in_Punjab_town_after_Christian_protest_turn_violent__N38698.html