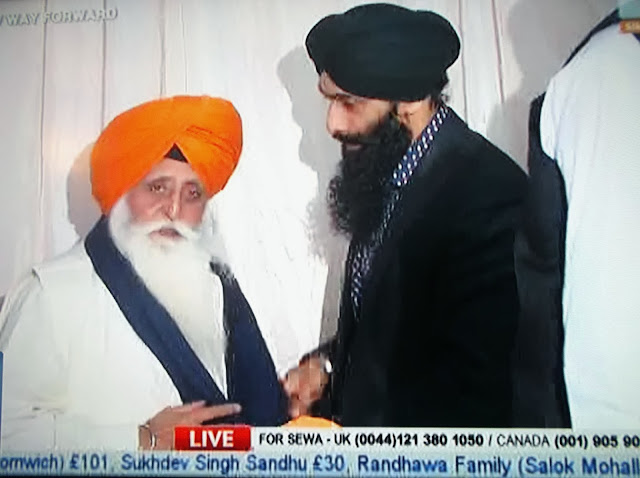 Sikh Youth To Be Framed Picked Up By Cops During Modi's Panjab Visit.

In response to mass Sikh Activism across the World in regards to the 1984 Sikh Genocide,the 'IB' or so called Indian Intelligence Bureau released several false statements.

The IB & RAW intelligence claim Sikhs will cross from Pakistan supported by the ISI to carry out an attack on Narendra Modi during his Panjab Visit.This is an outgraous statement to make against Sikhs and indeed Pakistan's Intelligence Services the ISI.The Hindutva Media has once again made this national headlines in an effort to propagate lies against Sikhs & present them as terrorists,you just have to watch the Youtube clips in which they keep mentioning 'Sikh Terrorists' 'Sikh Atankwadi'.

Why would a group of Sikhs risk their lives to cross the India - Pakistan border go through electric fences through,being patrolled by both the Indian & Pakistan Armies.This is a heavily patrolled border on both sides which is one of the few illuminated borders which can actually be seen from space.

Modi will have his own personal security of commandos with several thousand members of Panjab Police alongside plain clothes officers.These 'rings of steel' around Modi have been arranged to 'prevent' any attack on him by Sikhs.

This is all a ploy to crack down on Sikh Youth,we can tell you now that hundreds of Sikh Youths & Activists will be rounded up in the name of security across Panjab before December 8th 2013.The Hindutva Police will then put false cases on them & plant ammunition on them alongside weapons & not to forget the 'legendary RDX' which they always have to use to frame Sikhs with.

This will instil fear in the general Sikh population who have recently spoken out against the 1984 Sikh Genocide & rallied in support of Jathedar Bhai Balwant Singh Ji Rajoana & Khalistan - Self Determination.

We warn Sikhs in Panjab to be prepared for a major crackdown on the basic human rights of Sikhs as a whole.There is also the risk of a false flag attack which may be blamed on Sikhs to allow the Police to round up groups of Sikh Youth & eliminate a few of them in false encounters or shoot outs during protests if any are planned.Therefore we ask Sikhs to remain vigilant & to not put themselves in harms way during Modi's visit this is all a planned trap for the Sikh Nation & to present the next PM of India to Panjab.Modi's name instill's fear in the hearts & minds of minorties in India due to his hand in the Gujarat Genocide in 2002 & leadership of the Hindutva movement which wants a pure Hindu state of Hindi,Hindu,Hindustan.

Planned assimilation of Pannjab by the Hindutva facists

DAL KHALSA CONDEMNS THE BENEFITS,FREE HOUSING HEALTH CARE ETC TO IMMIGRANTS FLOODING PANJAB,THIS IS NOT IN THE INTERST OF PANJAB & THE SIKH NATION..

The increasing influx and settlement of migrants had brought "negative and unwanted changes" in the state, Dal Khalsa spokesman Kanwar Pal Singh said.

"Badal has failed to realise that the influx of migrants has had serious socio-economic-cultural ramification for Sikhs in particular and Punjab in general," he said.

"By encouraging them to get settled in the state, the SAD has joined the club of parties, including the BJP and the Congress, serving the interest of Delhi," he said.

"It is clearly vote-bank politics that will harm the interests of Punjab," he said. Yesterday, lauding the role of migrant labourers in the overall development of Punjab, Badal said his government would provide free education and health-care facilities to them.

Christians get framed and Sentenced to Life in Prison

on August 24, 2008, one of the most brutal attacks against Christians in recent history broke out in Orissa, India after Hindu extremist organizations blamed Christians for the murder of one of their leaders, Laxmanananda Saraswati.

The killings touched off a wave of religous violence throughout Orissa state, much of it directed at Christians. The violent uprising lasted more than seven weeks, leaving a swath of bloodshed and despair in its wake. During the violence in Kandhamal alone, more than 300 villages were ransacked. It is estimated that more than 120 Christians were murdered, some of them dragged from their homes and burned. At least 252 churches and Christian institutions were destroyed, more than 52,000 people fled for their lives into nearby forests, and some 6,000 houses were burned or destroyed.

Eight men were convicted of murdering Saraswati and four companions at his hermitage in the rural heart of Orissa state. As a mob of about 50 people surrounded the hermitage, several armed members of the crowd opened fire. The prosecution claimed that the accused men killed Saraswati because they believed he was converting Christians to Hinduism. "The judge convicted them purely on the basis of circumstantial evidence and the deposition of witnesses," reporters said.

Five years after the violent events, the seven Christians have been sentenced to life in prison for the murder of Saraswati. There was little evidence warranting the convictions, and the accused and their lawyer are planning to appeal. An eighth defendant, Pulari Rama Rao, a leader in India's Communist Naxalite movement, also received a life sentence.

Sajan George, president of the Global Council of Indian Christians, said the story was heartbreaking. "Seven people have already lost five precious years of their lives in prison without a fair trial. And thousands of other Christians who survived the most brutal wave of attacks are still living in fear."
Six days after handing down the men's sentences, the same Phulbani court, cited a lack of evidence in their acquittal of five defendants accused of burning down a house during the 2008 violence that followed Saraswati's murder. George said that such decisions were evidence of the prejudice that exists against India's Christian minority.

HOW BANDHI CHORH DIVAS WAS TURNED IN TO 'DIWALI' TO JOIN IT WITH THE HINDU FESTIVAL EVERY YEAR A PANDIT DECIDES THE DATE SIKHS WILL CELEBRATE...THATS HOW LOST WE'VE BECOME....THE WORD 'BIPAR' IN THE VIDEO MEANS BHAMAN

WHILE WE REMEMBER DHAN SRI GURU HARGOBIND SAHIB JI'S RELEASE FROM JAIL ON THIS DAY - WE DO NOT EXTEND ANY GREETINGS OR CONGRATULATIONS DUE TO THE #SIKHGENOCIDE ANNIVERSARY - READ OUR STATEMENT IN THE LINK http://dalkhalsa.blogspot.com/2013/11/sikhs-should-not-celebrate-bandhi-chorh.html 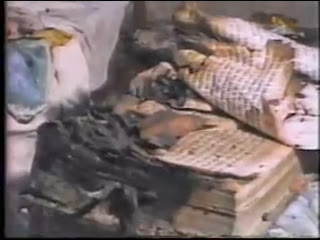 DHAN SRI GURU GRANTH SAHIB JI MAHARAJH BURNED & RIPPED TO PIECES - WE CAN SEE OUR HOUSE BURN BUT NOT OUR GURU... 29 YEARS TO THE DAY 1984 #SIKHGENOCIDE 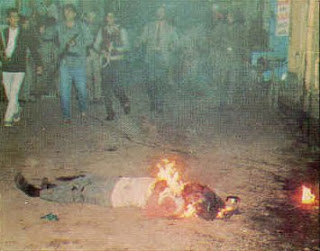