Stressing on unity within Panth, Dal Khalsa cautioned leaders to avoid controversial issues that have potential to divide the community‏ 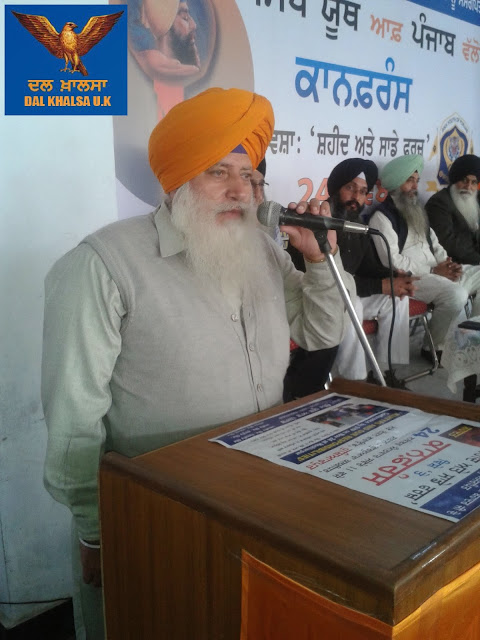 Dal Khalsa head H S Dhami stressed on unity amongst Sikhs and called upon leaders of the community to be sensitive towards the Sikh situation and avoid controversial issues that have a potential of creating bad blood within the community.
Dhami while speaking at a Conference on “Martyrs and our responsibilities’ organized by its youth wing “Sikh Youth of Punjab’ (SYP) said the Guru Teg Bahadur attained martyrdom to protect the oppressed class irrespective of their religion. 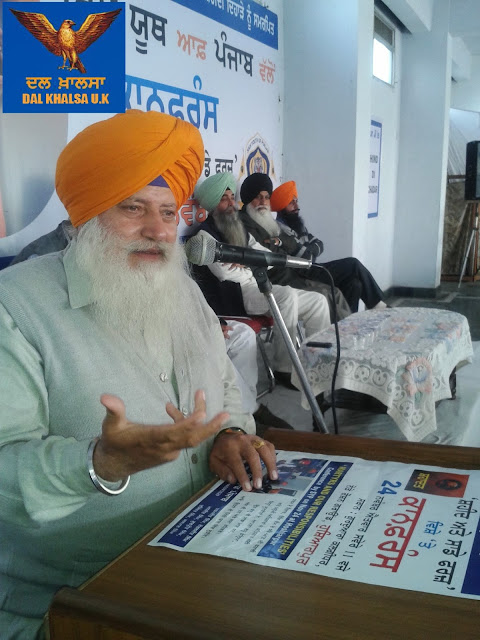 "Guru Teg Bahadur was undisputedly the first martyr for human rights. His martyrdom was unparalleled in world history as never before somebody had laid down life to defend the right of followers of another faith to practice their faith.
Paying rich tributes to martyrs, Dhami said, the best way to pay tributes to martyrs of the faith is that we should strive for taking their mission to its logical end. 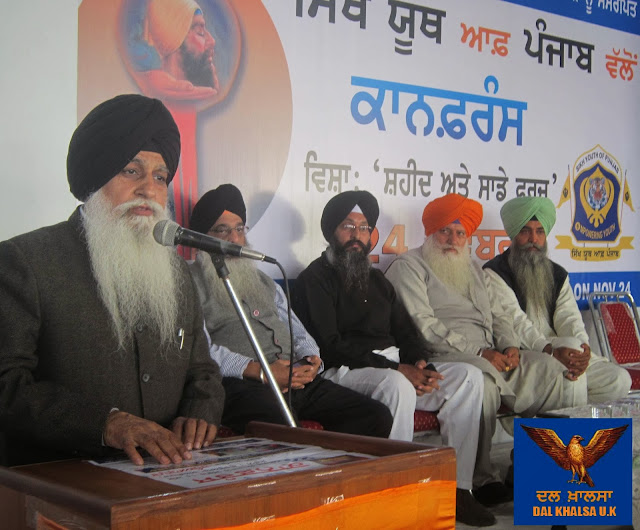 He described Sant Jarnail Singh Bhindrawale and his team (jatha) members as illustrious son of the soil who with their endeavor not only stood up against the tyranny and forced Sikhs to come out of their slumber, but also sacrificed their life for the sacred cause. “After 29 years of their martyrdom, we as a nation face several serious issues that demand our immediate attention,” said Dhami.

“The people who have sacrificed their precious lives include intellectuals, doctors, engineers, lawyers, farmers, students and businessmen had rather expected from us that come what may, the Sikh people would safeguard their sacrifices and take their unfinished mission to its logical end without showing signs of exhaustion”.

“Punjab police that comprises of Punjabi Hindus and Sikhs has been at the forefront suppressing their own people. Pro-India parties including SAD, Congress, BJP and PPP all are pursuing New Delhi’s anti-Sikh agenda to suppress Sikh struggle for self-determination, said Dhami.

Hitting out at some news channels, another Dal Khalsa leader Kanwar Pal Singh said “they have damaged the Sikh cause by labeling it as “terrorism”.  He maintained that they would continue to peacefully pursue their objective to achieve the Sikh goal for independence.

Dal Khalsa's former president Satnam Singh supported the cause of Gurbakash Singh, who is on fast unto death at Mohali demanding the release of Sikh detainees who are under detention since 90's.

The gathering passed the resolution acknowledging the contribution and sacrifices of large number of devout Sikhs, who embraced martyrdom while treading on the path of religion, righteousness and truth.  The organizers paid homage to all the martyrs and commits themselves to fulfill the unfinished task.


The resolution states: Death at the altar of religious commitment is a prized possession of the Sikh people.  Sikhs love death which comes in the course of fulfillment of their social and religious duties. For them, this is true martyrdom.