**Dal Khalsa Congratulates Everyone On The Parkash Purab - Birthday Of Dhan Dhan Sri Guru Nanak Dev Ji Maharaj - King Of Kings - The Saviour Of All Of Us,Who Showed Us The Path To Akaal Purakh & Gave Us Our Sikhi - Congraulations To All**

Just as Sri Guru Nanak Maharaj stood up to the tyranny of the time its out duty as Sikhs to follow the orders of our Guru and fight tyranny.In todays terms this is the Indian Fanatical Hindutva Regime and its armies 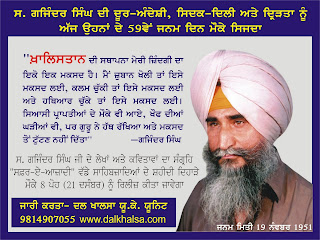 **Today Is Bhai Gajinder Singh Ji's - (Dal Khalsa Founder Member) 59th Birthday,He Spends This Day In Exile - As He Has Done For Nearly 30 Years Dedicating His Life For The Sikh Nation & Freedom Of Panjab Khalistan, -
Take A Moment Out To Reflect On His Life Long Sacrifice For Our Sikh Nation**

November 15th, 2010
It was reasonably good to hear from the US President Mr Barack Obama during his speech in the Indian Parliament that “speaking up for those who cannot do so for themselves is not interfering in the affairs of other countries. It's not violating the rights of sovereign nations. It's staying true to our democratic principles”.

Mr Obama’s was absolutely right and it was time somebody must say so. His speech is not only historic but also significant as it has provided (morally and ethically) legitimacy to one and all to speak up for injustice, repression and rights violations in any part of the world. It’s also a clear snub to all those states and nations including India that refuses to take lecture on rights violations on the pretext that “it’s their internal matter”.

While Obama took India to task for not speaking against suppression of human rights in Myanmar, his own failure to take note of India’s serious human rights problems is a matter of concern. The 'selective' approach of the US leader in raising rights abuses has sent wrong signal.

It is pertinent to mention that contrary to US stance to support the creation of a United Nations commission of inquiry into crimes against humanity and war crimes in Burma, the Indian government has given Burma's reclusive military ruler Than Shwe a red-carpet welcome during his controversial state visit to India in July this year.

Like Burma, gunning down of peaceful protestors and incarceration of political prisoners is rampant in Kashmir and was order of the day in Punjab in 80’s & 90’s where ethnic and religious minorities are striving to fulfill their rightful aspirations.

Referring to illegitimate rule of Myanmar’s military junta, US President has rightly said that it’s unacceptable to hold the aspirations of an entire people hostage to the greed and paranoia of a regime.

However, we wonder what stopped Mr Obama in criticizing the hawkish and repressive policies of his host country towards its minorities. Are the blood of Kashmiris, Nagas, Assamese and Sikhs cheaper than Burmese? Why the world community is indifferent towards their plight despite knowing fully well that unlawful arrests, illegal detention, custodial deaths, extra judicial killings, biased trials and capital punishment have been showered upon them without reprieve since long.

From the Delhi of 1984 to the Gujarat of 2002 to Orissa of 2008, political parties like the Congress and the Bharatiya Janta Party have reaped the benefits of political bigotry and vandalism. Chanu Sharmila – a frail but determined lady is on fast for the last 10 years protesting the Armed Forces Special Forces Act in Manipur and other parts of the northeast. Wailing Kashmiri mothers mourn the acts of the Indian army almost every day and the images are seen in the print media and in sections of the satellite television medium. The blood of 111 innocent Kashmiri’s was spilled on the streets of Srinagar and elsewhere unabatedly in the last 4 months. All attempts to get justice within the legal framework of the Indian system for the victims of 1984 anti-Sikh carnage that took place 26 years ago in Delhi have failed.

Though we have heard voices of sympathy and empathy from many a quarter, but in totality, the international community has failed all of us. As a result of the pressures of modern day politics where self-interest is paramount; the pain, sufferings and rights of all struggling peoples have become secondary and also subject to commercial interests of the country in question.

We believe that to restore and maintain permanent peace in South Asia,the real aspirations of the people of Kashmir, Nagaland, Manipur and Punjab must be recognized and respected.