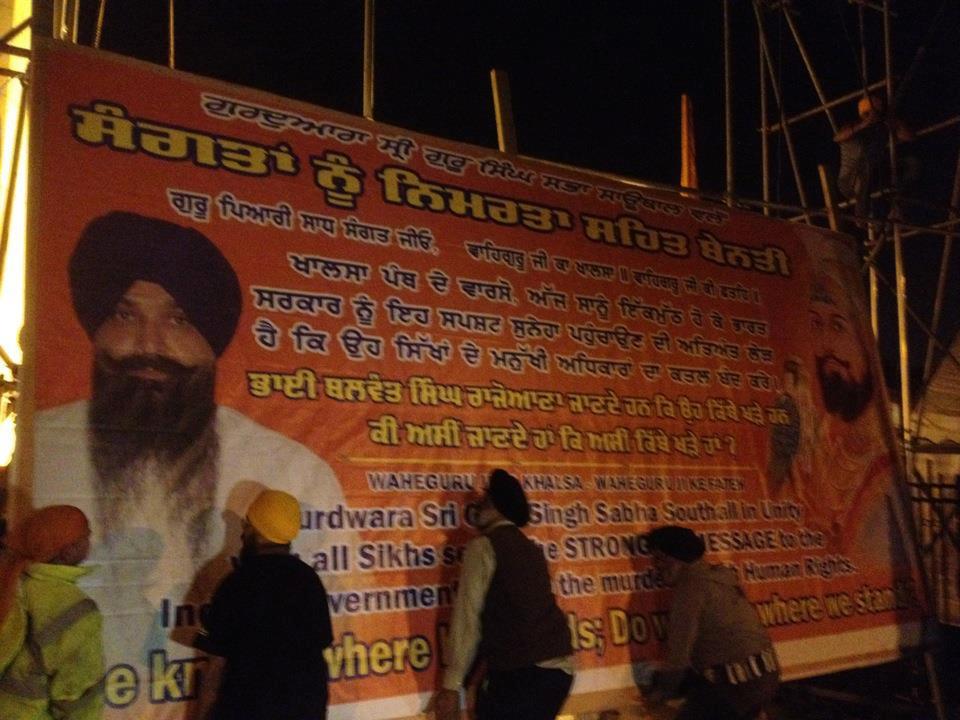 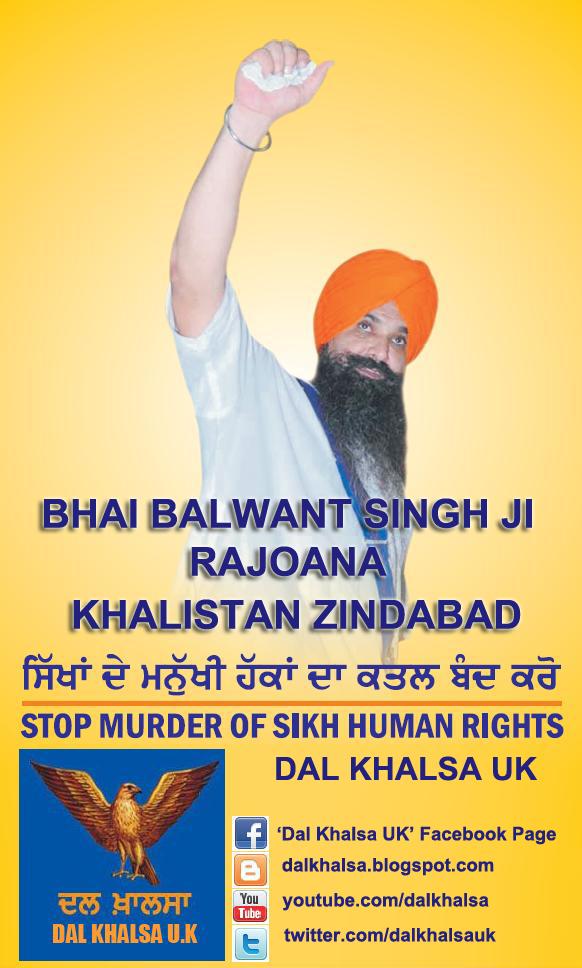 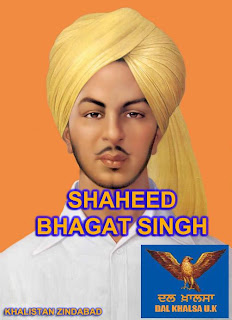 **BREAKING NEWS** THE PUPPET JATHEDARS FAILED TO DELIVER SIKHS TAKE MATTERS IN TO THEIR HANDS - DAL KHALSA,KHALSA ACTION COMMITTEE & COUNTLESS OTHER SIKH ORGS WILL ** SHUTDOWN PANJAB** ON THE 28TH OF MARCH - 3 MASSIVE KHALSA MARCHES WILL BE HELD ON THE 29TH AND ALL SIKHS WILL HEAD TOWARDS PATIALA JAIL - THE ENTIRE SIKH HOMELAND WILL COME TO A STANDSTILL - SPREAD THE WORD TO ALL OF PANJAB'S SIKHS http://www.youtube.com/watch?v=VIoj9i965Wo

THE SANGATS EMOTIONS HAVE SPILLED OVER AT STI AKAL TAKHT SAHIB THE PUPPET JATHEDARS AND LEADERS ARE IN FEAR WE HAVE SAID IT BEFORE AND SAY AGAIN DON'T WAIT FIR THESE PUPPETS YOU ALL ARE LEADERS AS SIKHS WHATEVER ACTION IS NEEDED THE SIKHS WILL TAKE !

WATCH LIVE FOOTAGE FROM SRI AKAL TAKHT SAHIB WHERE THE SANGAT HAS SURRONDED ALL THESE PUPPET JATHEDARS - THE SANGAT DON'T WANT NO HALF BAKED INDIAN INFLUENCED DECISION THE PANTH WILL DECIDE WHAT TO DO WITH OR WITHOUT THE PUPPET LEADERS!!

‎**BREAKING NEWS** PANJAB & HARYANA HIGH COURT DISMISSES PUBLIC INTEREST LITIGATION PETITION TO STOP THE HANGING OF BHAI BALWANT SINGH JI RAJOANA ... THEY ARE HELL BENT ON HANGING BHAI SAHIB EACH & EVERY SIKH IN THE WORLD & PANJAB NOW HAS TO LEAD THE WAY DON'T WAIT FOR ANY JATHEDARS/LEADERS/JATHEBANDIA EACH OF YOU ARE LEADERS AS ORDAINED BY GURU SAHIB MAKE YOUR OWN GROUPS START YOUR OWN CAMPAIGNS PLAN AHEAD !!! IF IT TAKES THE KHALSA PANTH TEARING DOWN PATIALA CENTRAL JAIL THEN SO BE IT OUR HISTORY SHOWS THAT WHEN WE ARE ONE NO FORCE ON THE PLANET CAN STOP US THE SIKH NATION WILL DESTROY PATIALA CENTRAL JAIL LIKE BABA BANDA SINGH BAHADUR DID TO SIRHAND! KHALISTAN ZINDABAD!

CHANDIGARH: A public interest litigation, seeking stay on the execution of Balwant Singh Rajoana, convicted for killing former Punjab chief minister Beant Singh and 17 others, was dismissed on Thursday by the Punjab and Haryana high court.

Dismissing the petition, a division bench headed by Justice Hemant Gupta held, "The argument raised in PIL is that till such time the matter attains finality with the orders of the Supreme Court, the execution of death sentence in respect of Balwant Singh should be stayed, as there is a possibility of setting aside the order passed by this court confirming the death sentence... We do not find any merit in the present petition".

The bench further observed, "The prayer sought in the present petition by way of public interest, has the effect of temporary cessation of an order passed by the coordinate bench of this court, particularly when he did not put in an appearance in the murder reference and has also refused assistance by a counsel at state expense. "He has not even filed an appeal before the Supreme Court. This court has no such jurisdiction to stay an order passed by the coordinate bench by way of an interim order in a public interest litigation".

Filed by a NGO, Lawyers for Human Rights International (LHRI), the PIL had submitted that since the judgment wide which the death sentence of Balwant Singh has been confirmed, is under an appeal before the Supreme Court and an appeal filed by CBI against the conviction of Jagtar Singh Hawara has been admitted by the apex court on December 5 last year, thus the decision in this case has not yet reached finality.

It's best to call them the more of us call the better also email them on Please copy paste the below
with your name and send it to londonnews@bbc.co.uk & yourlondon@bbc.co.uk


To Whom it may concern,

We invite BBC London News to Southall on the 25th of March 2012 to cover the Sikh Vaisakhi Procession (Nagar Kirtan)celebrating the birth of the Sikh brotherhood the Khalsa Panth established in 1699.

This year the Nagar Kirtan will have special significance as it will a focal point for all UK Sikhs who will also use the event to rally support for Bhai Balwant Singh Rajoana - a Sikh Political Prisoner who is to be hanged on the 31st of March 2012 by the Indian State.

Sikhs across the World have been outraged by this decision which comes after 17 years of detention in prison.He was impriosned in the Assassination case of former Panjab Chief Minister Beant Singh - who was responsible for the extra judicial killings of over 250,000 Sikhs in Panjab during the early 90's.Balwant Singhs close friend Dilavar Singh assassinated Beant Singh in 1995 in order to put a stop the brutal oppression against the people of Panjab .All this has been covered by Human Rights Groups & Amnesty International.

With over 200,000 people expected to attend the Southall Procession will be the biggest gathering of Sikhs in relation to Vaisakhi as well the hanging of Bhai Balwant Singh Rajoana who's story has captured the hearts of millions of Sikhs across the World & in the wider UK.Sikhs will gather at 12am at Sri Guru Singh Sabha Havelock Road Southall - where the procession will start and will end at Sri Guru Singh Sabha Park Avenue at 5pm throughout the procession there will be thousands of Sikh Nishan Sahibs(Sikh Flags),Placards,Posters,Stickers representing support for Bhai Balwant Singh Rajoana & Sikh Freedom - Self Determination in the form of a Sikh State - Khalistan.All of the UK's Sikh organisations will be in attendance and are united behind Bhai Balwant Singh Rajoana

We kindly invite your newsteam to cover this event along with the wider BBC such as National News,BBC Radios & BBC World

Here is a video which tells Balwant Singh Rajoana's story 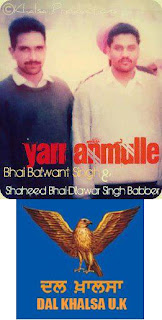 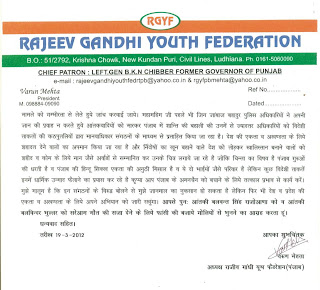 THIS LETTER TO THE INDIAN PRESIDENT CALLS FOR THE HANGING AND DEATH OF BHAI BALWANT SINGH RAJOANA - IT WAS SENT BY THE PANJAB CONGRESS & THEIR AFFILIATES - BE IT BJP/SHIV SENA/BAJRANG DAL/RSS & CONGRESS ALL ARE OUT FOR THE BLOOD OF SIKHS & THE ESTABLISHMENT OF HINDUTVA! WAKE UP PEOPLE! 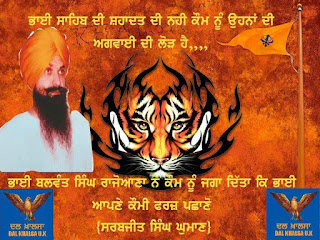 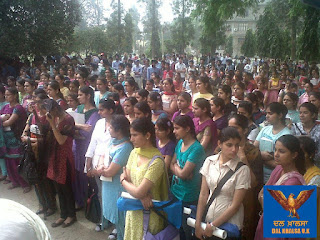 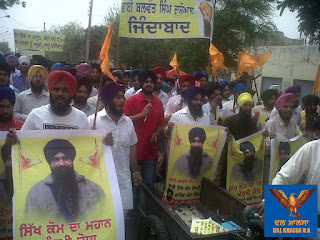 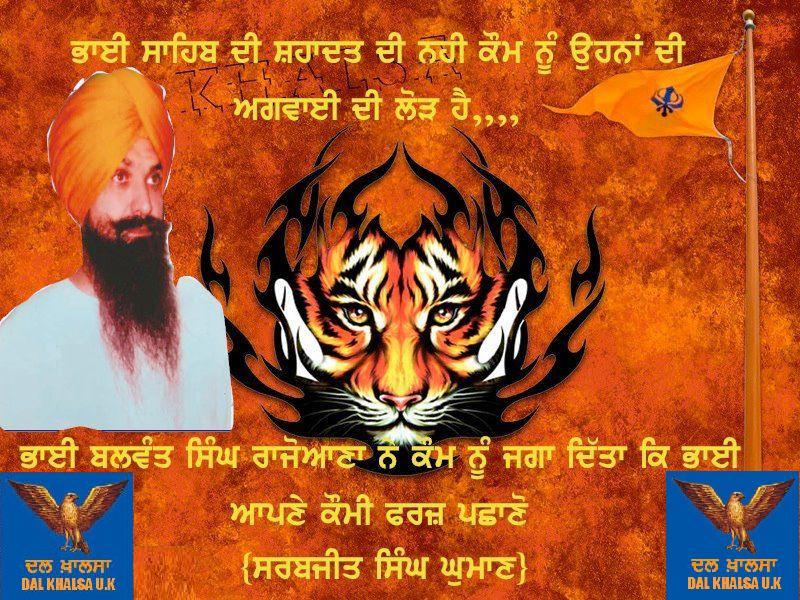 WE THANK EACH & EVERYONE OF YOU WHO CAME TO THE CONFERENCE IN SOUTHALL TODAY - YOUR LOVE FOR BHAI BALWANT SINGH RAJOANA BROUGHT US ALL TOGETHER **WE CONDEMN THE MINORITY OF ILLEGAL IMMIGRANTS WHO CAME ON PURPOSE TO DISRUPT THE CONFERENCE ON THE ORDERS OF ANTI SIKH FORCES,MANY WHO ATTENDED MAY NOT KNOW THIS BUT THE ATTEMPT TO CAUSE FIGHTS & DISRUPT WERE MADE ALL BY ILLEGAL IMMIGRANTS WHO'S PURPOSE WAS TO STOP THE CONFERENCE - THIS WAS A WELL PLANNED ATTACK BY THE AGENTS OF THE INDIAN STATE & BADAL