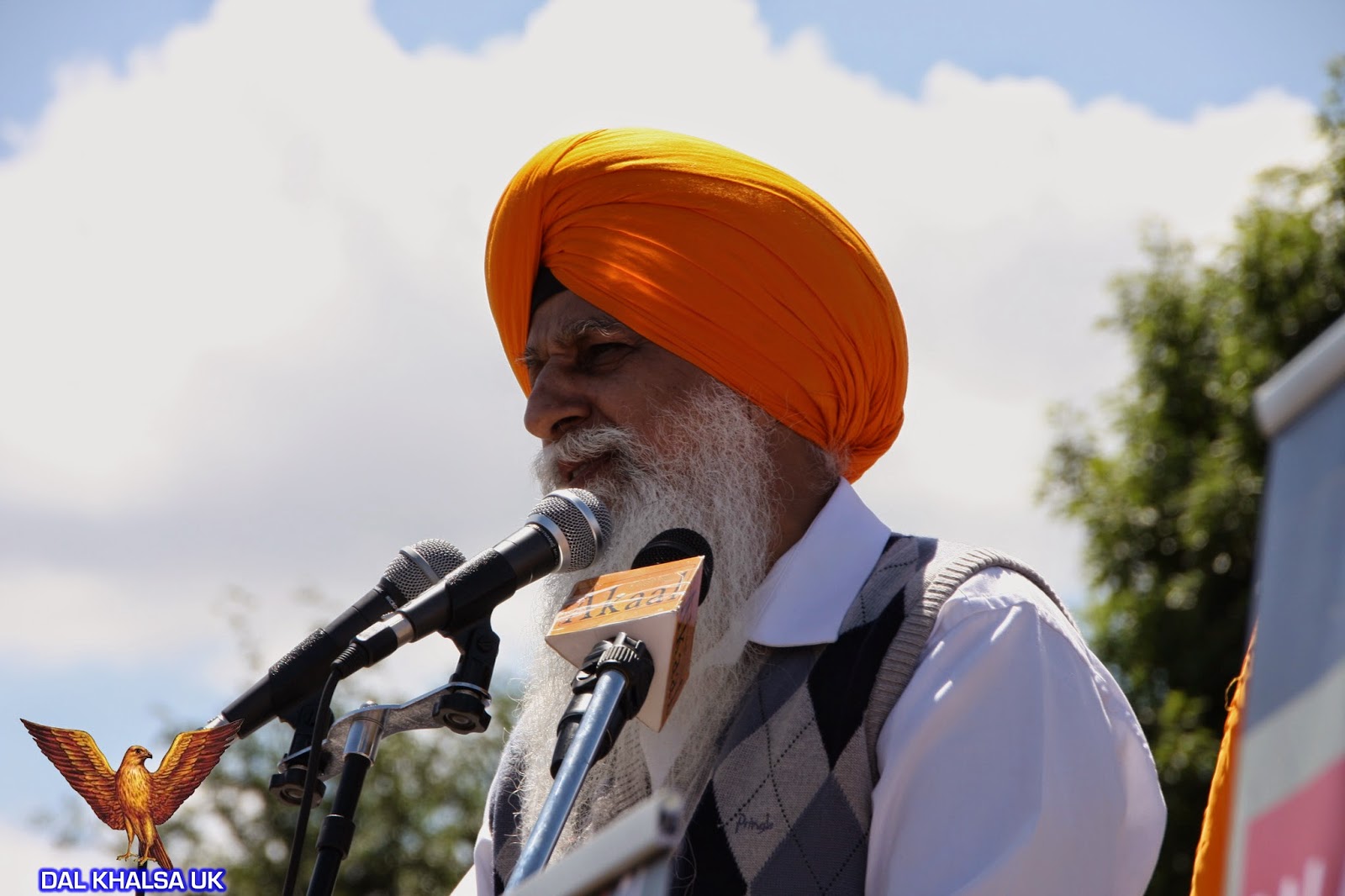 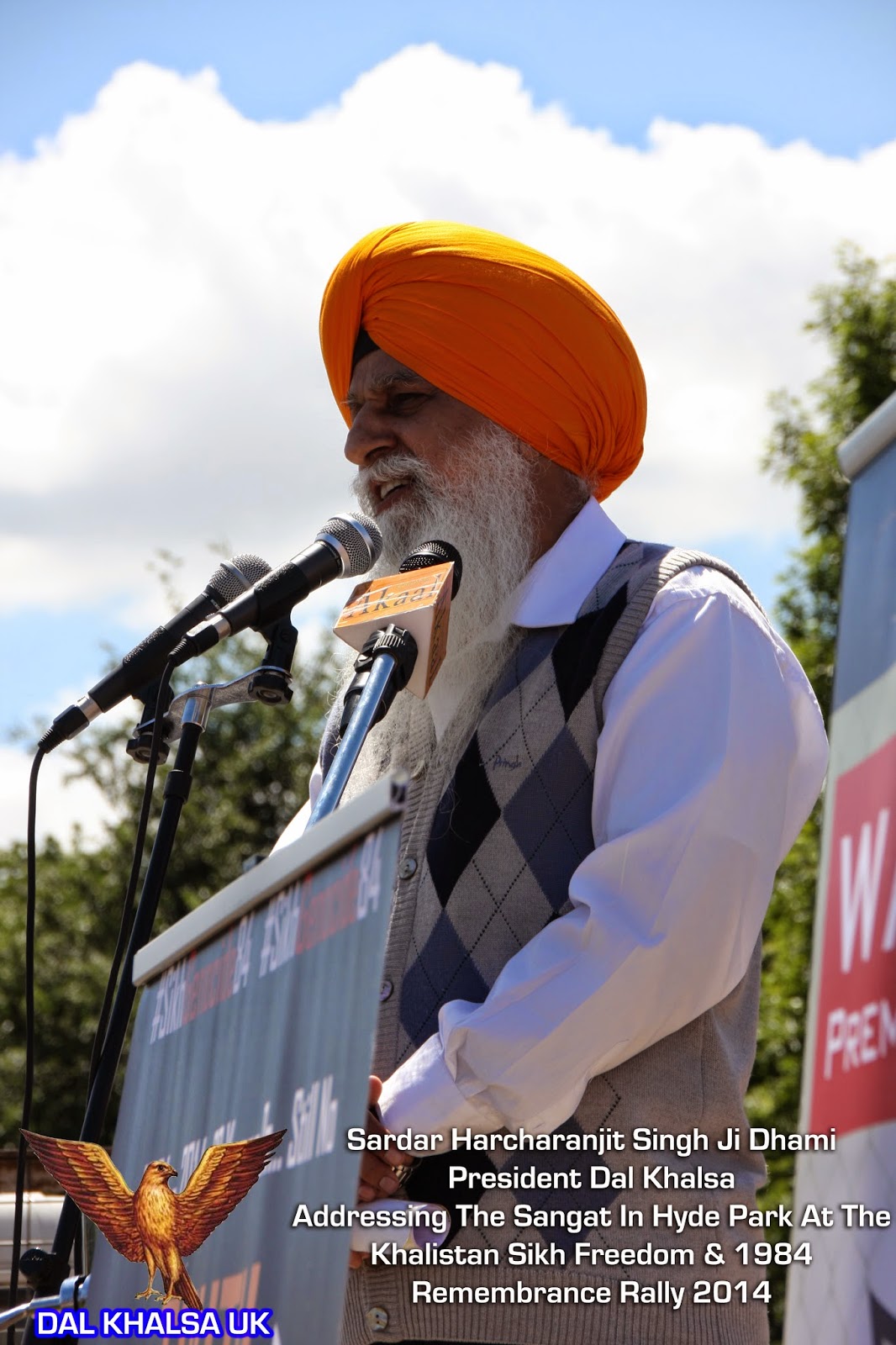 Sardar Harcharanjit Singh Ji Dhami is in the UK and has specially come from Panjab to take part in events relating to the 30th
anniversary of the 1984 Sikh Genocide.

Bhai Sahib attended the Khalistan Sikh Freedom & 1984 Remembrance Rally on the 8th of June 2014,and addressed a crowd of thousands in Hyde Park.Throughout the day 100,000 Sikhs from across the UK marched from Hyde Park to Trafalgar Square to mark 30 years of the 1984 Sikh Genocide & to rally for the freedom of the Sikh Nation - Khalistan.Bhai Sahib's message was one of attaining freedom through working with one another in the spirit of unity & Panthic Ekta.Bhai Sahib paid tribute to the countless Shaheeds who have given their lives in defence of the Sikh Nation,Humanity & Freedom.

Bhai Sahib also praised the UK Sikh Sangat for carrying on the struggle for freedom in such huge numbers on the 30th Anniversary of the 1984 Sikh Genocide.As this was the first Khalistan Sikh Freedom & 1984 Remembrance Rally Bhai Sahib has attended he was very impressed with the passion of UK Sikhs towards the goal of freedom,recollections which he will take back to Panjab & share with the Panthic Organisations & Sikh Youth groups who are at the forefront of the struggle.

Various discussions were made over several hours on how to move forward as a united Panth were made & Bhai Sahib expressed their views that the Sikh Nation should move away from being sucked in to issues which divide the Panth,rather we should focus doing our own bit for the betterment & freedom of the Sikh Nation.Bhai Sahib also discussed how and Sikhs are still enslaved under the Hindutva Brahmin System which has been implemented in all spheres of life,most notably the Indian Constitution.On the issues of rehit maryada etc all agreed that Sikhs should follow the Panthic Rehit Maryada as laid our by Sri Akal Takht Sahib Ji.All agreed that the ideology of the Khalsa Panth & Sikhism is the only way forward to attain freedom for the Sikh Nation in the form of Khalistan,not only this education is a key aspect of this to propogate the voice of truth. 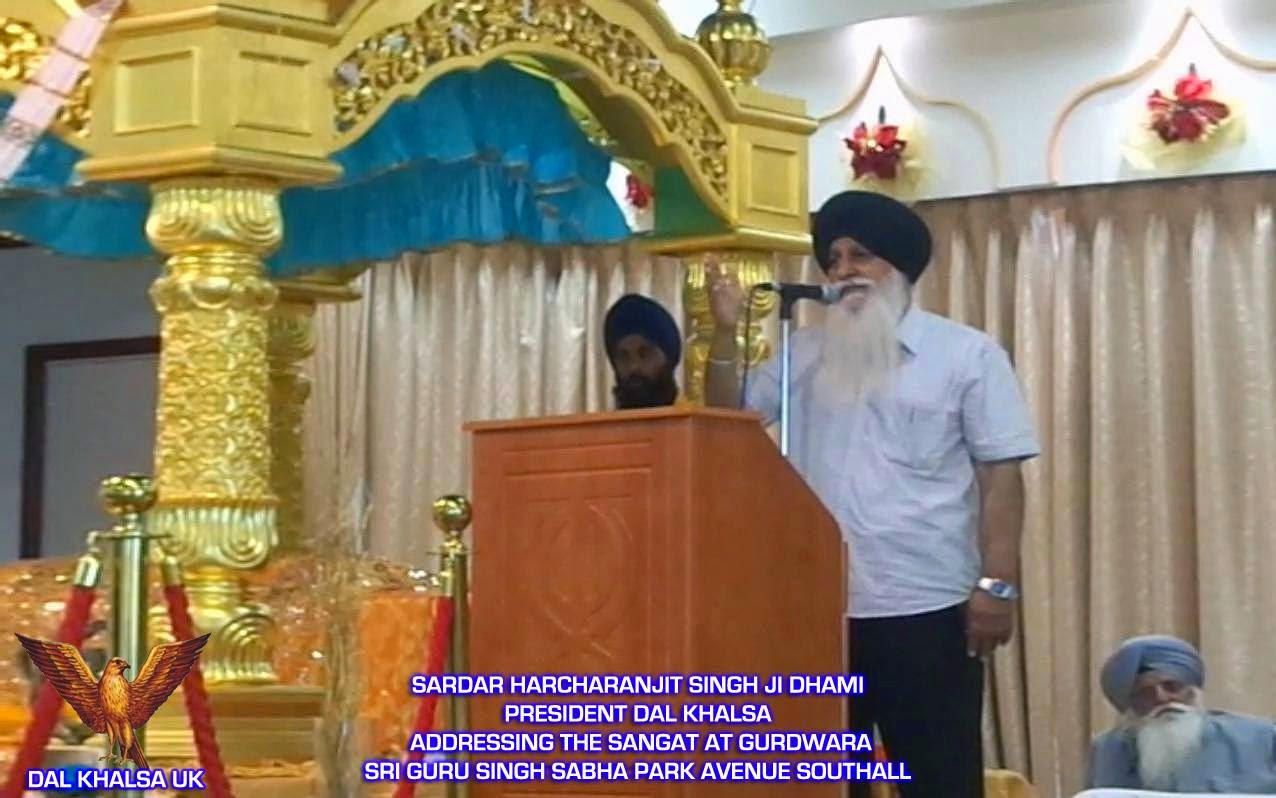 Sardar Harcharanjit Singh was then invited to Gurdwara Sri Guru Singh Sabha Park Avenue Southall,where upon request of Sevadaars he addressed the Sangat. 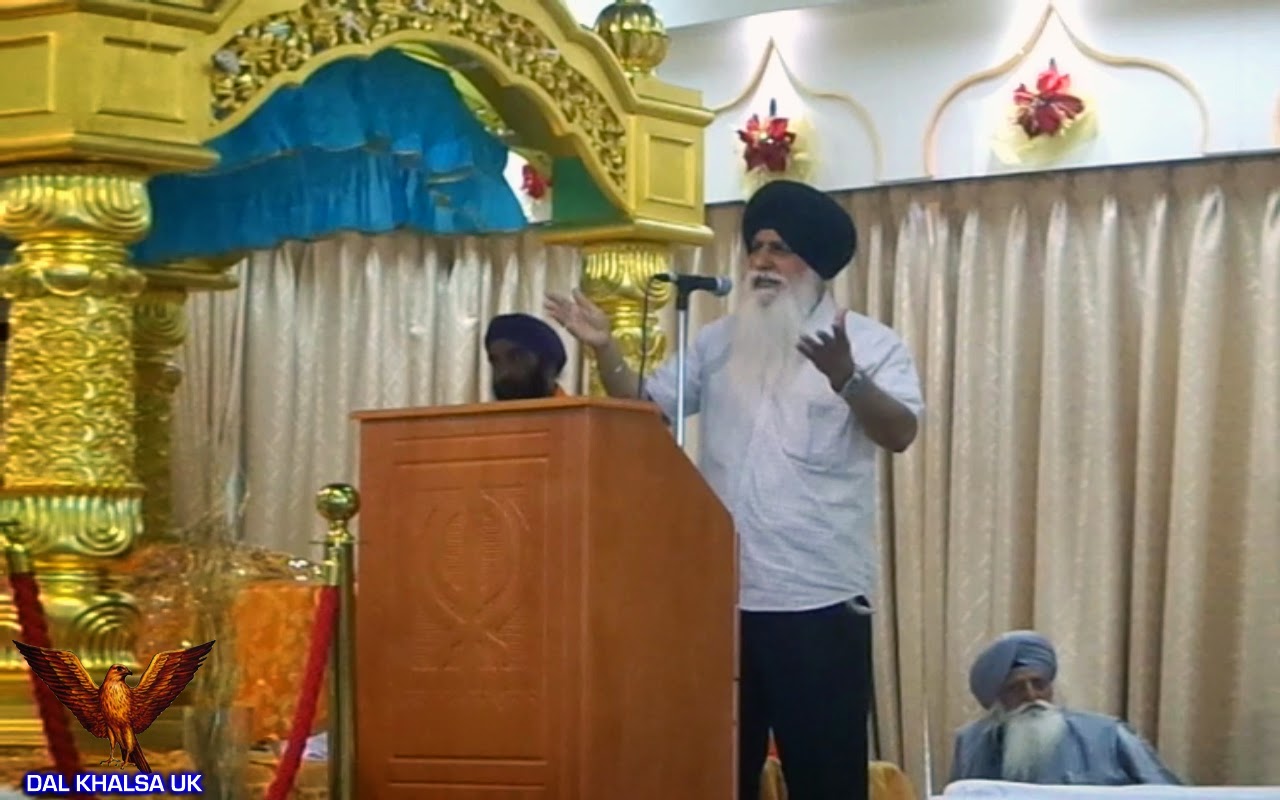 Bhai Sahib spoke about the atrocities commited on the Sikh Nation from the time of Sri Guru Nanak Dev Ji till the present day - 1984 - now the Sikh Genocide.Bhai Sahib described how sell out leaders are used to control the Sikh Nation & enslave it further in the Hindutva System.

Using historical examples of how a nation awakens & frees itself from slavery to freedom,Bhai Sahib asked the Sangat to unite as one and see through the plans to designed to wipe out the Sikh Ideology,Panjab & the Sikh Nation as a whole from history as well as the World.Bhai Sahib gave the sangat a promise that
Dal Khalsa will continue to lead the Sikh Nation to it's goal of freedom working with all other Panthic Sikh Organisations for the betterment & unity of the Sikh Nation.

All in all Sardar Harcharanjit Singh Ji Dhami - President of Dal Khalsa has found his visit to the UK to be inspirational & emotional to say the least from seeing UK born Sikh Youths leading the the Khalistan Sikh Freedom & 1984 Remembrance Rally 2014,to witnessing the UK Sikh Youth doing Jakare of
Bole So Nihaal Sat Sri Akaal, Khalistan Zindabad, Raaj Karega Khalsa, Never Forget 1984 in the middle of London 30 years after a full scale genocide,seeing these scenes in front of his eyes in London & Panthic Spirit of Gurdwareh such as Sri Guru Singh Sabha Southall ,who were the single biggest donors to the Khalistan Sikh Freedom & 1984 Remembrance Rally 2014,Bhai Sahib described how he got emotional being from Panjab & seeing such Panthic Spirit thousands of miles away.

Bhai Sahib's speech can be seen below in two parts:

Sardar Harcharanjit Singh Ji Dhami was then honoured with a Siropa on behalf of the Sangat & Sri Guru Singh Sabha Southall by Bhai Sukhdeep Singh Ji Randhawa,Sardar Manmohan Singh Ji Khalsa & other members of the Sangat. 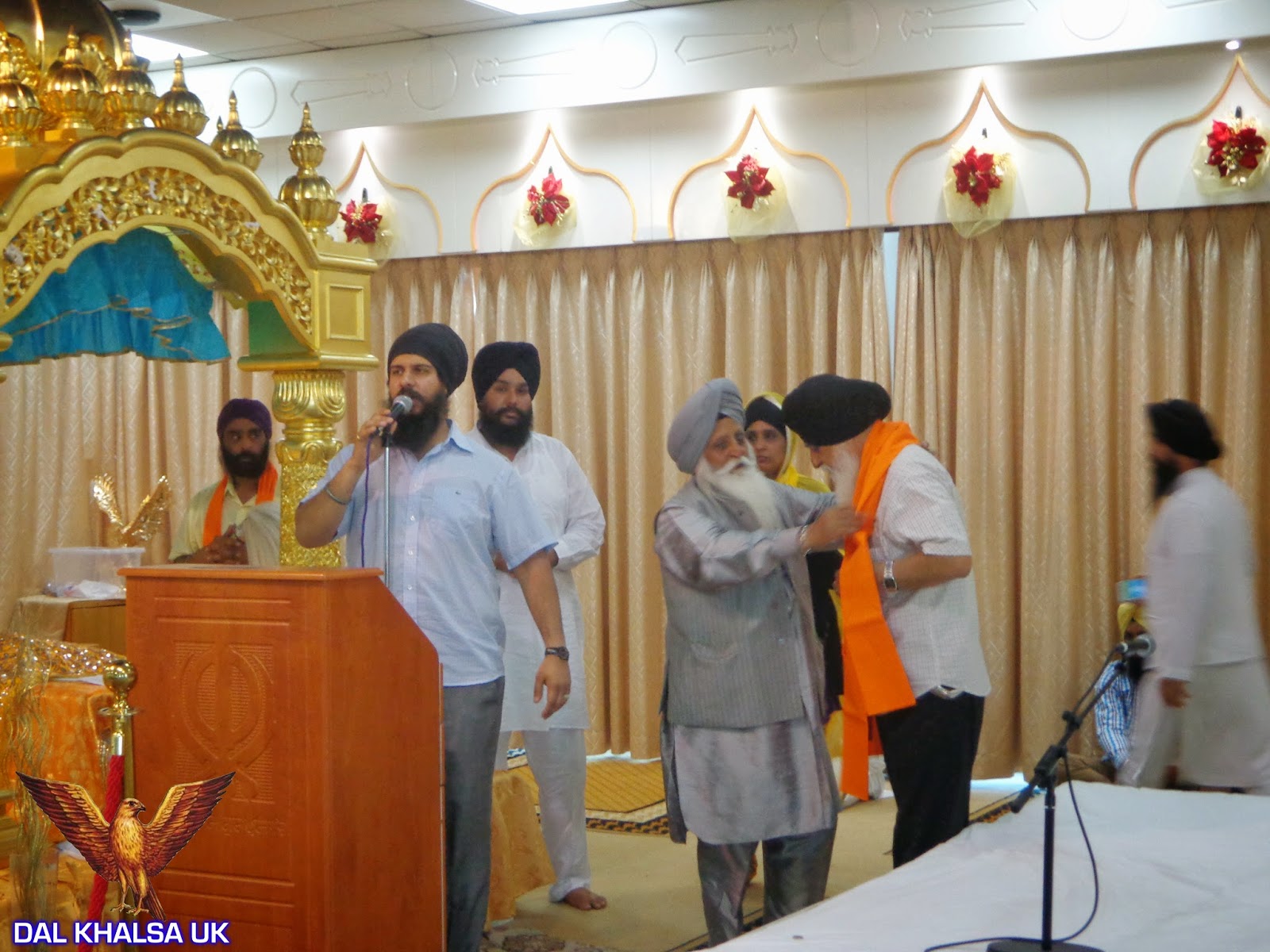 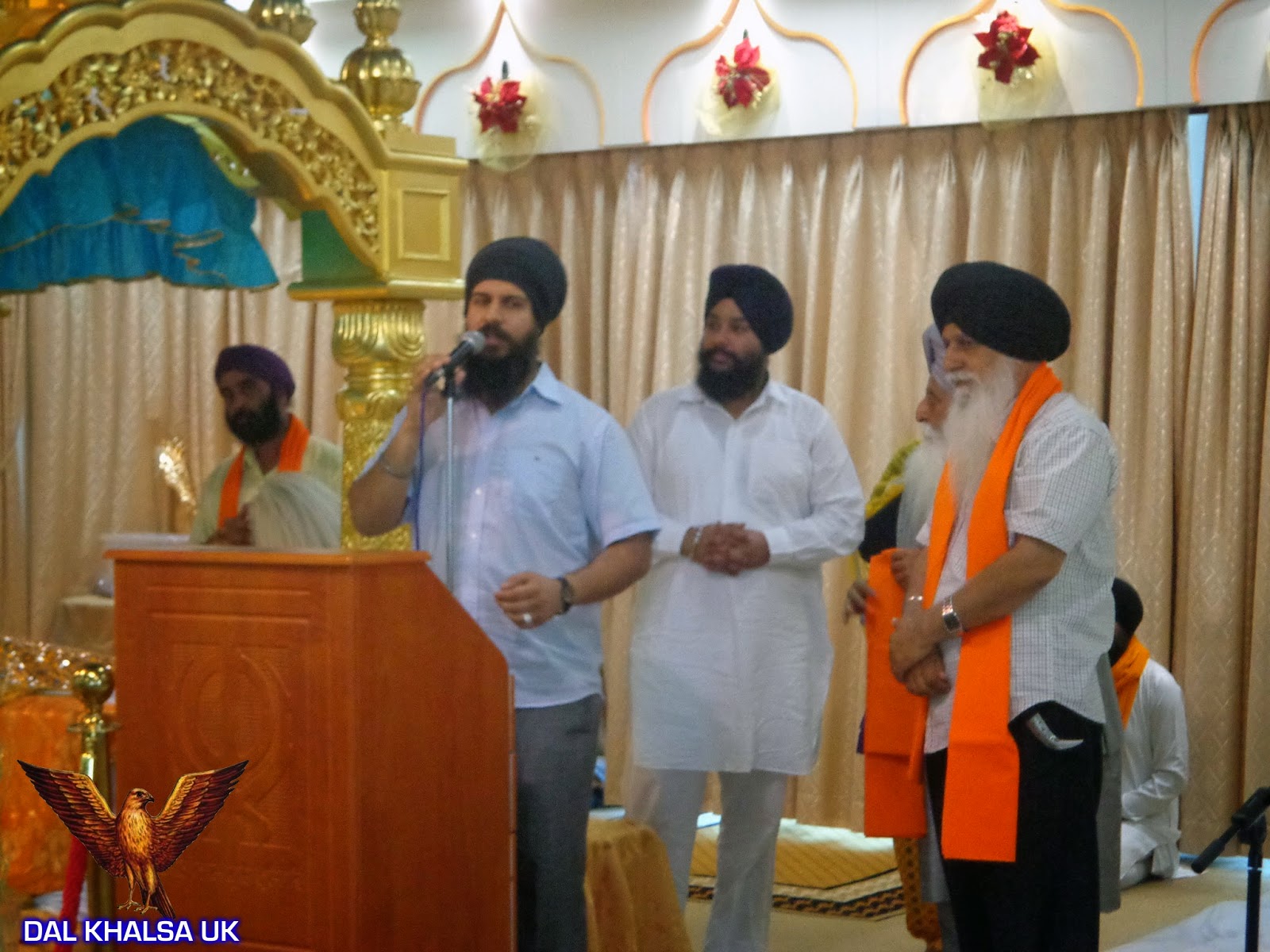 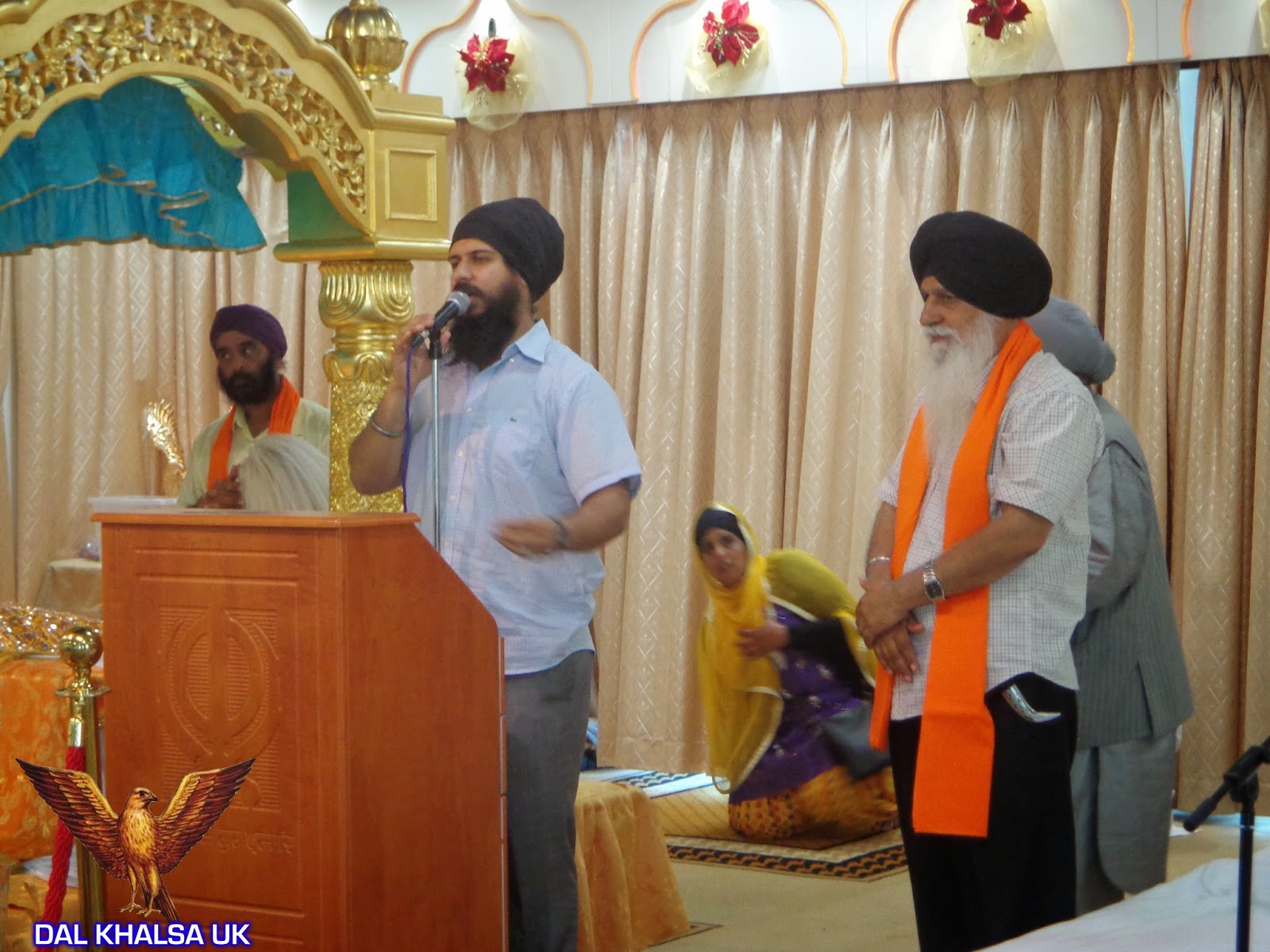 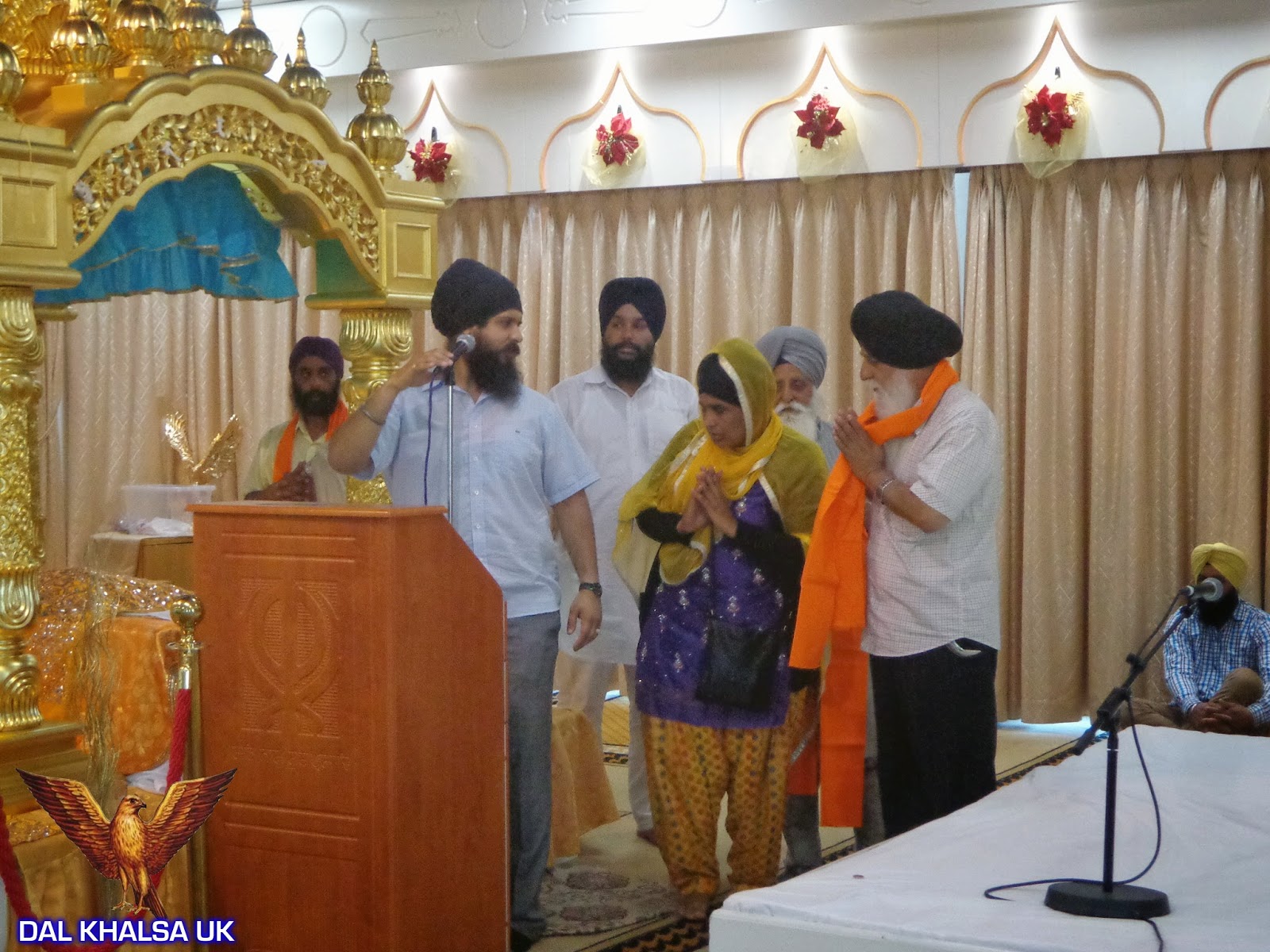 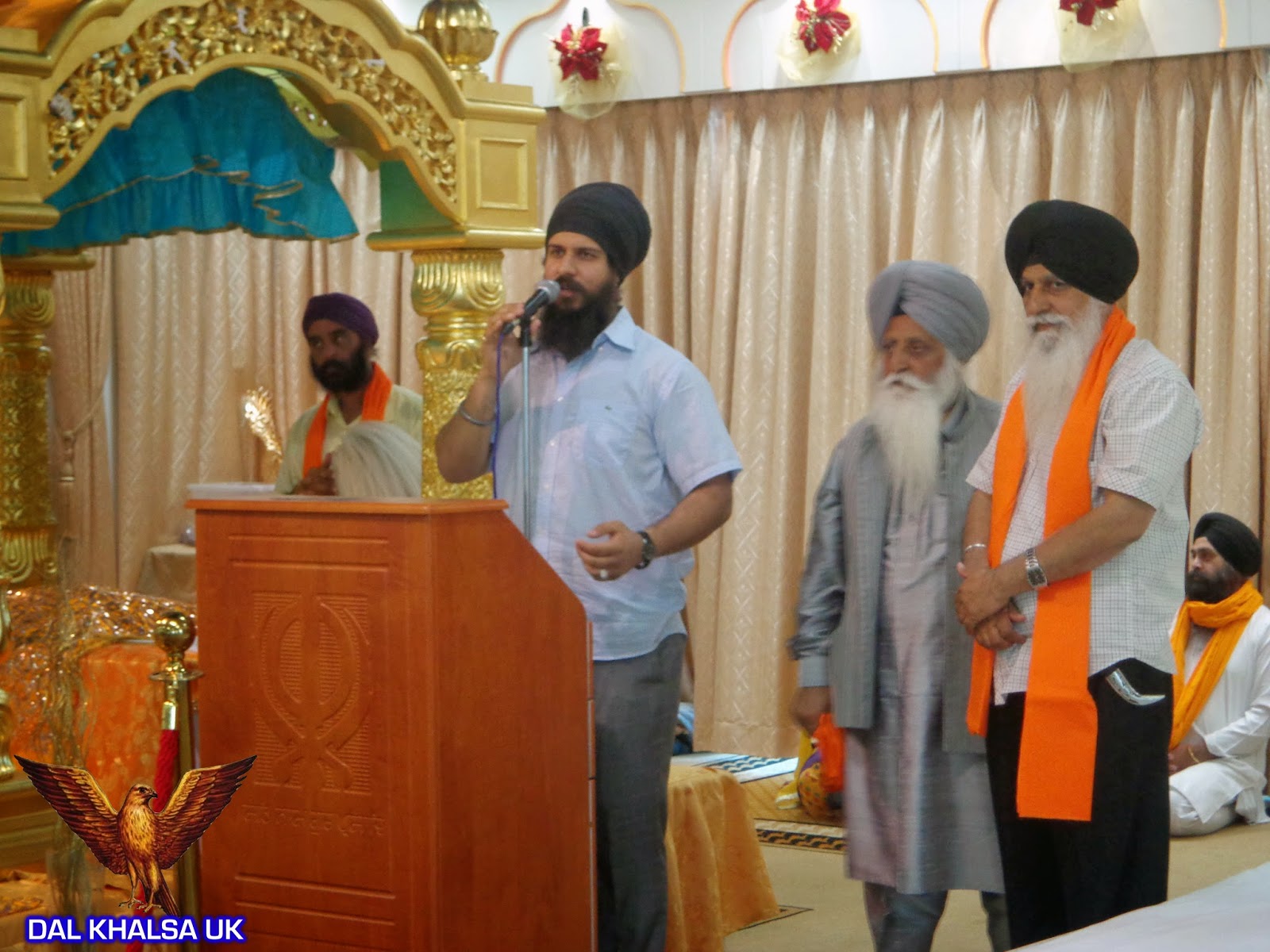