On the 406th Parkash Purab of Sri Guru Granth Sahib Ji, the Dal Khalsa urged the Sikhs to defeat the designs of all such sects and cults which had recently mushroomed and were propagating the concept of a living gurus as it was against the Sikh faith and tenets.

Cults and sects created to destroy Sikhism by Hindutva Forces are out of control and have spread to all parts of Panjab as well as in the West where Sikhs live ie: UK,Europe,USA.The aim of these Hindutva backed groups is to ultimately merge Sikhs back in to Hinduism,while destroying the very fabric of the Sikh Community & Nation through destroying families,by targeting Sikh females who are then kept as so called 'Sadvhis' and are than raped after being brainwashed.One such example is Choota Sauda leader Ram Raheem who is a known rapist along with Ashutosh leader of the Anti Sikh Noormehlia cult whose sole aim is to force Hinduism on the Sikhs,through any means.

Labelling Radhasoamis, Namdharis as violators of the Sikh code of conduct who were showing disrespect to the basic teachings and philosophy of the Sikh Gurus and Guru Granth Sahib, the Dal Khalsa called upon its followers to shun the practice of "living guru" and accept the sacred Granth Sahib as their Guru.

The so called Guru's of the Namdharis,Radhaswamis,Narkhdharis( Nirankari),Choota Sauda,Noormehlia,Bhanyarehwala and countless others are there to attack the Sikh Nation & to destroy it.Its is our duty as Sikhs to expose these Pakhandis and defend the Sikh Nation from attacks by these Hindutva Deras which are a like a disease in Panjab and in our community

We have only ONE eternal GURU ,Sri Guru Granth Sahib Ji Maharaj and no other - we will not tolerate any attacks on our GURU or on our Sikh Nation! 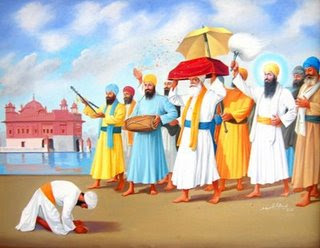 Hoshairpur- The Dal Khalsa on Monday asked the Akal Takht and the SGPC to install the portrait of Bhai Dilawar Singh at Sikh Central Museum, Amritsar on Aug 31st to commemorate his 15th martyrdom day.

Notably, Dilawar Singh was a human bomb that assassinated the late chief minister of Punjab Beant Singh on 31st August 1995 at civil secretariat, Chandigarh. The co-accused in the case Balwant Singh and Jagtar Singh Hawara has been awarded death sentence by the special designated CBI court in 2007.

Calling both Indira Gandhi and Beant Singh as symbol of tyranny, the Sikh group today shot off a letter to Akal Takht jathedar and SGPC chief urging them to install portrait of Dilawar Singh as the Sikh premier institution has installed portraits of Bhai Beant Singh, Bhai Satwant Singh, Bhai Sukdev Singh and Bhai Harjinder Singh Jinda- the assassins of late Indira Gandhi and Army chief Gen A S Vaidya.

Paying tributes to him, party head H S Dhami called Dilawar Singh their ‘quomi martyr’ as he sacrificed his life to restore Sikh human rights, which were being brutally crushed by Congress regime of that time.

He said the killings of youth were order of the day under Beant Singh that forced him to take extreme step. “His (Dilawar Singh’s) contribution towards the Sikh cause should not be seen in isolation. He acted as per Sikh traditions and commands great respect amongst Sikh masses notwithstanding his status in the eyes of the (Indian) establishment.