Bhindrawale's T-shirts are not a banned item, how can police register a case, questions Dal Khalsa 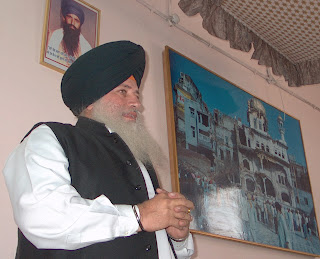 Amritsar- Describing the police crackdown as uncalled and unwarranted, the Dal Khalsa today criticized the seizure of T-shirts on which photograph of Sant Jarnail Singh Bhindrawale along with Khalistani slogans were imbibed from Ludhiana city.

In a statement, party's senior most leader Satnam Singh Paonta Sahib has flayed the police action and theory. He went on to question the police as how could T-shirts that are being sold openly in markets, shops in all cities since many years would suddenly "vitiate the peaceful atmosphere in the state".

He said calendars, stickers, coffee-mugs, key chains and T-shirts carrying Sant Bhindrawale's pictures were already in circulation in huge quantity ever since Akal Takht has declared him a 'great martyr' in 2003. “For Sikhs, he is a martyr and his portrait has been installed in the Darbar Sahib museum by the SGPC.”

Youths in villages and towns of the state can be seen sporting bright yellow T-shirts, emblazoned with huge photos of Bhindranwale. And the paraphernalia is being openly sold in prominent markets in all major cities, claimed the former president of the radical Sikh group.

He smells some design behind the seizure and registration of a case under 153 IPC as the elections to the state assembly are round the corner. We fail to understand what prompted police to implicate Manwinder Singh Gyaspura, the whistleblower who brought to fore Hondh-Chillar massacre that took place in Haryana, in this case.

He asked the Chief Minister of the state to look into the matter and order the cancellation of the FIR as manufacturing or selling T-shirts is not banned. He claimed that even the Supreme Court and High Court had ruled in one of its rulings that demanding Khalistan was no crime as long as the campaign was pursued in a peaceful and democratic manner.

AS WE HAVE BEEN WARNING OVER THE LAST FEW WEEKS THEIR IS A MIS-INFORMATION & PROPAGANDA WAR AGAINST SIKHS BY INDIA.THIS TIME 2 INNOCENT SIKHS HAVE BEEN ARRESTED & CALLED TERRORISTS,ALL THE INDIAN MEDIA INCLUDING PAPERS CLAIM THEY ARE PART OF BABBAR KHALSA WHICH IS FAR FROM THE TRUTH,THESE ARE TWO INNOCENT AVERAGE SIKHS,THE AIM IS TO RUIN THEIR LIVES & DRIVE THEM AWAY FROM SIKHI AS WELL AS QUASH ANY FREEDOM OF SPEECH FOR SIKHS,GIVE IT A FEW DAYS WE WILL HAVE ANOTHER BULLS*HIT REPORT LIKE THIS

THE SIKH NATION IS IN THE MIDST OF AN INFORMATION WAR WITH THE INDIAN HINDUTVA STATE WHO ARE BLOCKING OUT THE TRUTH & ARE PUTTING OUT FALSE PROPAGANDA AGAINST THE SIKH NATION,ITS UP TO YOU NOW TO JOIN THE INFO-WAR MAKE VIDEOS GIVING YOUR VIEWS,UPLOAD THEM TO YOUTUBE,SEND IN YOUR VIEWS TO THE MEDIA,DISCUSS ISSUES ON SOCIAL MEDIA IE: FACEBOOK & SO ON.THE TRUTH NEEDS TO BE TOLD IN THIS NEW AGE WAR OF FALSE PROPAGANDA BY HINDUTVA INDIA AGAINST SIKHS .... DO YOUR BIT!

MEMBERS/LEADERS OF THE KHALSA ACTION COMMITTEE,DAL KHALSA,PANTHIC SEVA LEHAR,PANCH PARDANI & OTHER SIKH GROUPS HAVE BEEN PUT UNDER HOUSE ARREST & ARE UNDER 24 HR SURVEILLANCE BY THE POLICE & INTELLIGENCE SERVICES,THEY HAVE BEEN GIVEN CLEARANCE FROM THE HIGHEST AUTHORITIES TO **SHOOT ON SITE**! IF THEY FEEL ANY SIKH IS A 'THREAT' THIS HAS ALL BEEN DONE TO DISRUPT THE EVENT ON THE 27TH IN FATEHGARH SAHIB TO DECIDE THE NEXT COURSE OF ACTION

A news reported by some sections of Indian media terms T-Shirts as “objectionable t-shirts used for the promotion of the cause of a banned militant outfit”, but it is not mentioned the name of the so-called banned outfit. This time the police process is initiated on the complaint of Shiv Sena, a Hindu outfit, known for it’s anti-Sikh activities. Shiv Sena had objected to the installation of photo of Sant Jarnail Singh Bhindranwale at National Sikh Meusem, in Darbar Sahib Complex at Amritsar. This outfit, Shiv Sena, is termed as “social body” by the media reports.

As per information available with Sikh Siyasat Network Ludhiana police has registered FIR number 233 under section 153A, a part of offences against public tranquillity.

“A man named Manvinder in Ludhiana makes these t-shirts. These t-shirts have the photographs of militant leader Jarnail Singh Bhindranwale and objectionable material has also been written on them and,” Surinder Singh, a police official, is reported to have said by media.

Manvider Singh Giaspura, who had discovered the remains of Sikh Genocide 1984 site Village Hondh Chillar, in Haryana said that he is being targeted by the State because he acted as a whistle-blower to preserve the Sikh Genocide 1984 site, which remained ignored for more than 25 years. His house was ransacked back in March, in his absence.

“Moreover the t-shirts had the photograph of Bhindranwale along with the text which read ‘when the Indian army sets its foot in the Harimandir Sahib complex, the foundation stone of Khalistan will be laid’ was written” news report added.

THE HINDUTVA INDIAN STATE TERROR POLICE ARE NOW SEIZING T SHIRTS! YES T- SHIRTS!WITH THE PICS OF SHAHEED SANT JARNAIL SINGH JI KHALSA BHINDRANWALE ON THE ORDERS OF THE HINDU TERRORIST OUTFIT 'SHIV SENA' ACROSS THE PANJAB.SHIV SENA HAS EARLIER CALLED FOR THE KILLING OF SIKHS WHO SPEAK FOR FREEDOM,DAVINDERPAL SINGH BHULLAR,JAGTAR SINGH HAWARA & OTHERS...THE HINDUTVA STATE IS STEPPING UP THE ANTI SIKH ACTIVITIES IN THE LEAD UP TO THE 27TH OF DEC GATHERING @ FATEHGARH SAHIB WHICH WILL DECIDE THE NEXT COURSE OF ACTION.SIKH LEADERS OF KHALSA ACTION COMMITTEE,DAL KHALSA,PANCH PARDANI,PANTHIC SEVA LEHAR & OTHERS HAVE ALREADY BEEN PUT UNDER 24HR SURVEILLANCE & VIRTUAL HOUSE ARREST,CLEARANCE HAS BEEN GIVEN TO SHOOT ON SITE IF THE POLICE FEEL ANY SIKH IS A THREAT.

WE CONDEMN THE ABUSE OF SIKH HUMAN RIGHTS BY THE HINDUTVA INDIAN POLICE **URGENT!LIVE UPDATE** MEMBERS/LEADERS OF THE KHALSA ACTION COMMITTEE,DAL KHALSA,PANTHIC SEVA LEHAR,PANCH PARDANI & OTHER SIKH GROUPS HAVE BEEN PUT UNDER HOUSE ARREST & ARE UNDER 24 HR SURVEILLANCE BY THE POLICE & INTELLIGENCE SERVICES,THEY HAVE BEEN GIVEN CLEARANCE FROM THE HIGHEST AUTHORITIES TO **SHOOT ON SITE**! IF THEY FEEL ANY SIKH IS A 'THREAT' THIS HAS ALL BEEN DONE TO DISRUPT THE EVENT ON THE 27TH IN FATEHGARH SAHIB TO DECIDE THE NEXT COURSE OF ACTION

FOOTAGE OF SIKHS PREPARING FOR ARREST UNDER THE LEADERSHIP OF BABA BALJIT SINGH DADUWAL BY THE INDIAN HINDUTVA STATE TERROR POLICE IN NEW DELHI WHILE PROTESTING AGAINST THE RSS DESTRUCTION & OCCUPATION OF GURDWARAS,GURDWARA GYAN GODHRI SAHIB WAS DESTROYED IN 1984 SHOPS & TOILETS HAVE NOW BEEN BUILT ON THE SITE WHICH IS CONTROLLED BY THE RSS,THEY NOW PLAN TO BUILD SEVERAL MANDIRS ON THE SITE

Dal Khalsa UK Salutes The Shaheedi Of The Elder Sahibzadeh

WE SALUTE THE ULTIMATE SACRIFICE MADE NY THE TWO ELDER SONS - SAHIBZADEH OF SRI GURU GOBIND SINGH JI WHO GAVE SHAHEEDI,SAHIBZADA AJIT SINGH JI & SAHIBZADA JUJHAR SINGH JI FOUGHT THE HINDU HILL KING & MUGHAL ARMIES OF OVER 100,000 & GAVE THEIR LIVES LIVING FOR THE SIKH NATION.YOU ARE THE INHERITORS OF THIS GLORIOUS HISTORY ,IT IS BECAUSE OF THE SACRIFICES OF OUR FOREFATHERS & BROTHERS THAT WE ARE HERE TODAY,BUT HOW MANY OF US APPRECIATE THIS OR TRY & EDUCATE OTHERS?TODAY THE SONS OF SRI GURU GOBIND SINGH JI ARE IN YET ANOTHER STRUGGLE FOR FREEDOM FROM THE OPPRESSION OF INDIA & HINDUTVA WE ARE SHOT DEAD,HANGED,BURNED ALIVE,BEATEN & JAILED BUT HOW MANY OF US CARE? LOOK BACK AT YOUR HISTORY & GET THE INSPIRATION WE NEED TO MOVE FORWARD TO ATTAIN FREEDOM

DAL KHALSA UK THANKS YOU ALL FOR YOUR CONTINUED SUPPORT THROUGHOUT THE YEAR.IN WHAT HAS BEEN AN EVENTFUL & AT TIMES TRAGIC YEAR FOR THE SIKH QOUM WE HOPE YOU ALL HAVE LEARNT A LOT IN RELATION TO THE SITUATION OF THE SIKH NATION & THE WORLD AS A WHOLE.WE ASK YOU ALL TO CONTINUE YOUR SUPPORT IN TO 2012 & 'PLAY YOUR PART' IN ADVANCING THE SIKH FREEDOM MOVEMENT FOR KHALISTAN & SIKH HUMAN RIGHTS IN THE FORM OF MEDIA BE IT EXPOSING THE HINDU TERROR GROUPS LIKE RSS, INDIAN ATROCITIES/TERROR AGAINST SIKHS,TRIBUTE VIDEOS TO SHAHEEDS,MUSIC VIDEOS/POEMS/TRACKS/ART/ESSAYS OR JUST GIVING YOUR OWN VIEWS YOU ALL NEED TO DO YOUR BIT IN 2012,FOR WE ARE IN THE MIDST OF AN INFO-WAR WITH INDIA & WE HAVE TO COUNTER ALL THEIR MISINFORMATION & LIES AGAINST US.WE ENCOURAGE ALL SIKHS TO TAKE PART YOUR DON'T HAVE TO BE AN EXPERT OR A 'RELIGIOUS EXPERT' TO SPEAK ABOUT THE ABOVE ISSUES,ALL YOU NEED IS THE INSPIRATION OF OUR GURUS,GURBANI,HISTORY & SHAHEEDS.WE HOPE YOU ALL HAVE LEARNED SOMETHING FROM THIS PAGE THROUGH OUR EFFORTS,OUR AIM IS TO EDUCATE YOU SO ARE GIVEN THE CHANCE TO PLAY YOUR PART.WE APPEAL TO YOU TO GET ALL YOUR FRIENDS/FAMILY TO JOIN THIS PAGE AS WE WOULD LIKE TO FORM A 'NETWORK' THROUGH HERE WITH YOU ALL.ONCE AGAIN WE THANK YOU FROM THE DEPTHS OF OUR HEARTS FOR YOUR UNDYING SUPPORT IT GIVES US THE INSPIRATION AND DRIVE TO CONTINUE TO DO OUR BEST TO WORK & DO SEVA FOR THE SIKH NATION. KHALISTAN ZINDABAD ....BE A PART OF THE LIVE MOVEMENT...

Dal Khalsa's Kanwarpal Singh Bittu
Dal Khalsa appeals to all the Sikh Nation to support & attend the protest which is to be held at the BJP/RSS headquarters in New Delhi on December 20th.The protest will be lead by Baba Baljit Singh Ji Daduwal along with Bhai Mokham Singh Ji & others of the Panthic Sewa Lehar.

Sikhs will gather to protest against the destruction of several Gurdwaras in 1984 which were destroyed by Hindu Mobs.Since then shops & Mandirs have been built on the land of the Gurdwaras which were dedicated to the visit of Sri Guru Nanak Dev Ji Maharajh,further development is being planned by the Fanatical Terrorist RSS Hindutva groups who are now in full control of the land.These groups along with other local Hindu groups are opposing the handing back of the land to the Sikh Qoum so that the Gurdwaras can be rebuilt.Therefore after long deliberation this protest in New Delhi has been planned on the 20th of December 2011 under the leadership of Baba Baljit Singh Ji Daduwal.

Dal Khalsa fully supports this event & appeals directly to the masses of Panjab to attend in huge numbers.The Hindutva Fanatics are hell bent on wiping out the memory & message of Sri Guru Nanak Dev Ji as they see their ideology of peace and truth as a threat to their evil aims,henceforth they destroyed the Gurdwaras on the site in Hardwar which are as old as Sri Nankana Sahib.The only difference is that Sri Nanakana Sahib still stands with pride as the birth place of our 1st Guru ,yet these historical Gurdwaras were torn down in 1984 to wipe out the history of the Sikh Nation & memory of Sri Guru Nanak Dev Ji.