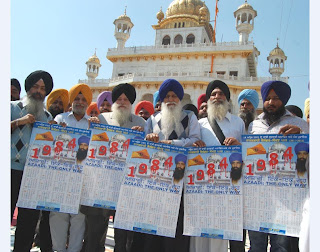 THE HINDUTVA INDIAN POLICE REOPEN A 7YEAR OLD CASE AGAINST 22 MEMBERS OF DAL KHALSA, A CASE WHICH CLAIMS DAL KHALSA COMMITTED TREASON OR DESH DROHI IN BHAMAN TERMS AGAINST INDIA,WHEN DAL KHALSA TOOK OUT A MARCH FROM OUR HEADQUARTERS IN AMRITSAR TO SRI AKAL TAKHT TO MARK 21 YEARS SINCE THE SIKH GENOCIDE...SO ACCORDING TO HINDUVTA INDIA REMEMBERING A GENOCIDE & HOISTING A FLAG OF THE SOVEREIGN SIKH NATION IS TREASON ...THERES YOUR SO CALLED DEMOCRACY

THE MEETING WITH BABA BALJIT SINGH JI DADUWAL @ SRI GURU ARJAN DEV GURDWARA DERBY WAS A HUGE SUCCESS,ALL THE UK SIKH SANGAT ALONG WITH DAL KHALSA UK & OTHER PANTHIC ORGANISATIONS HAVE EXTENDED THEIR FULL SUPPORT TO BABA BALJIT SINGH JI ON THE ISSUE OF RECLAIMING GURDWARA GYAN GODHRI SAHIB WHICH WAS DESTROYED IN 1984 BY HINDUTVA TERRORISTS..WE ASK ALL SIKHS TO SPREAD NEWS OF THIS & OF THE PETITION & SIGN IT http://epetitions.direct.gov.uk/petitions/26448 ALONG WITH THIS BABA BALJIT SING HAS THANKED YOU ALL FOR THE CONTINUOUS SUPPORT IN THE DHARAM YUDH MORCHA - SIKH STRUGGLE FOR FREEDOM,THEY APPEAL TO ALL SIKHS TO UNITE AS ONE UNDER THE KESRI NISHAN SAHIB AGAINST ALL ATTACKS FROM HINDUTVA TERRORISTS & APPEAL TO ALL TO KEEP THE FIGHT UP IN THE MEDIA WAR,WHERE HINDUTVA INDIA IS DOING FALSE PROPAGANDA ONLINE YOUTUBE/FB ETC WE NEED TO STEP UP & SPREAD THE TRUTH VIA THE INTERNET & SOCIAL MEDIA 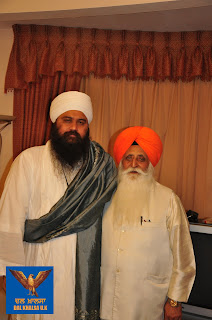 Batala ,(3 feb,Sukhdev Randhawa):- A farmer reportedly in debt of Rs 80 thousand committed suicide by hanging himself at his farm in Teja Veehla village.
The farmer, Baljinder Singh (30), hanged himself in the tube-well room of his farm late last night . Some villagers detected him hanging on the Guarder in tube-well room . He was declared dead by doctor.
Baljinder is survived by two kids and wife. had taken a loan of Rs 40 thousand form cooperative society and Rs 35 thousand from the aartia (commission agent ). He had only two acres of land and could not arrange the money. According to neighbors he was mentally upset for last many days . he was looking for some job but could not succeed .
The body was later handed over to family members after a post-mortem examination at the Batala civil hospital.the police registered a case under Sections 174.

CONGRATULATIONS TO ALL ,ONE OF THE GENERALS WHO COMMANDED OPERATION BLUESTAR - SIKH GENOCIDE IN 1984 HINDUTVA TERRORIST LT GEN R.S DAYAL DIED ON SUNDAY HE SUFFERED TILL THE LAST MOMENT WITH PROSTATE CANCER....HE WAS A NARKHDHARI FOLLOWER OF THE ANTI SIKH NIRANKARI KNOWN TO SIKHS AS THE NARKHDHARI CULT WHICH MASSACRED SIKHS IN 1978.

FARMER SUICIDE & THE ENVIRONMENTAL DESTRUCTION OF PANJAB & THE SIKH NATION

‎**BREAKING NEWS**SIKH CHANNEL TEAM & CAMERA MAN ASSAULTED & ATTACKED IN PANJAB THIS IS THE SO CALLED DEMOCRACY UNDER HINDUTVA INDIA - AN ATTEMPT TO DESTROY OUR FREE & INDEPENDENT MEDIA! WE CONDEMN THIS ACT & STAND WITH SIKH CHANNEL

Amritsar, Punjab (January 30, 2012): Indian media was reporting since last two months that Pro-Khalistan Sikh leaders, allegedly hiding somewhere in Pakistan, were planning to trigger blasts to halt election process in Punjab. This falsehood was exposed as nothing of the sort happened in Punjab today, rather there are reports of some local clashes between supporters of “mainstream” political parties. These “mainstream” political parties indulged in distribution of cash, liquor, poppy husk, opium and other intoxicants to lure voters.
Media was reporting that there were firm inputs available with Intelligence agencies of India that Sikh militants hiding in Pakistan with support of Pakistan’s agency ISI were planning to trigger blasts on public places and target “prominent” persons, including some politicians and sect-heads.
This is not the first time that falsehood of Indian Media’s propaganda is exposed, rather it is now turning to be a thing of routine occurrence in Punjab.
In November 2009 on the eve of 25th anniversary of genocidal violence against Sikhs, Sikh bodies were organizing one day shut down on of 3rd November (2009). A prominent Punjabi newspaper claimed to possess the copy of “top secret” communication, alleged to have taken place between Senior officer of Intelligence Bureau (IB) of India and Ministry of Home Affairs (Government of India – GOI). The news report warned that despite the repeated assurances and claims made by Sikh bodies that the shut down would be peaceful, there was enough input available with the IB that Sikh militants hiding in Pakistan would trigger incidents of bomb blasts and public  shooting on the 25th anniversary of November 1984 violence against Sikhs.
When the Sikh Siyasat contacted the journalist said to have reported the concerned news report, admitted that even he did not believe that November 3, 2009 shutdown would witness any sort of violence. He said it was policy of his newspaper to carry such reports and it was him employment compulsion to fabricate such stories.
These highly sensitive news reports accusing Sikhs for plotting to hit public with violence are published by Indian media on a routine basis, whenever Punjab is engaged in some process of political importance, such as mass mobilization by Sikhs (to mark ghallughaha or holocaust day or public movement against anti-Sikh activities of certain State patronized cults), SGPC elections or assembly elections etc.
Independent observers told “Sikh Siyasat” that this was part of media-war against the Sikhs and their cause. Such news contents, when published repeatedly on selective occasions, serve a specific purpose of terrorizing the people of Punjab. This way the State projects Pro-Independence Sikhs as a threat to public safety and tries to discredit them and at the same time presents a very negative image of the cause of proposed Sikh State or Khalistan.
Another political observers was of the view that it was not a random phenomena rather an effective tool of psychological warfare initiated by the Indian state against the Sikhs.
Tagged with: Embedded Journalism, Indian Media, Khalistan, Media War Against Sikhs, Punjab Assembly Election 2012, Punjab Assembly Elections 2012, Punjab Polls 2012, Sikh Struggle

‎**BREAKING NEWS** AHEAD OF THE PANJAB ELECTIONS HINDUTVA RSS TERRORISTS HELD A MASSIVE MEETING TO DISCUSS HOW TO ADVANCE THEIR AIM OF HINDUTVA HINDI,HINDU,HINDUSTAN WE ALL NEED TO BEWARE AND EDUCATE ONE ANOTHER BEFORE ITS TOO LATE!

**IMPORTANT** EVERY SIKH WATCH SIKH CHANNEL 840 NOW! DR SUKHPREET SINGH UDHOKE IS DOING A LIVE TALK ON THE RSS HINDUTVA ATTACKS ON THE SIKH FAITH & SIKH NATION & HOW THEY ARE TRYING TO HINDUIZE SIKHI TEXT ALL YOUR FAMILY/FRIENDS TO TUNE IN !WATCH & LEARN! SIKHS OUTSIDE THE UK CAN WATCH http://www.sikhchannel.tv/