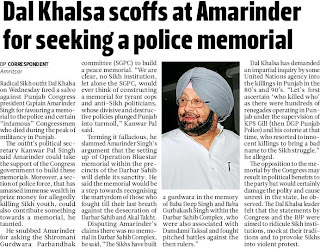 The Hindutva Bhamanvaadi Indian Govt has blocked all access to the Dal Khalsa UK Facebook page in Panjab & India, out of desperation & cowardice in an effort to hide the truth which was reaching the Sikh Masses within Indian Occupied Panjab & India.

Those in Panjab & India may well still be able to access the Dal Khalsa UK Facebook Page by downloading 'TOR' https://www.torproject.org/ A free software implementation of second-generation onion routing, a system enabling its users to communicate anonymously on the Internet.A free proxy server such as http://www.hidemyass.com & others can be used.

This action of the Hindutva Bhamanvaadi Indian Govt shows the true colours of this so called 'World's Largest Democracy',which wants to hide the truth about the on going Sikh Genocide & attacks on the Sikh Nation,Faith,Panjab & on our human rights.

In many ways we consider this a victory for the Sikh Nation - Khalsa Panth as a whole this drastic action of desperation and cowardice demonstrates how the tyranical Bhamanvaadi Hindutva Rulers of India fear the truth & the Sikh Nation...Our struggle for freedom will continue and we thank all the Worldwide Sangat for their continued support.
Khalistan Zindabad
Raj Karega Khalsa
NeverForget1984 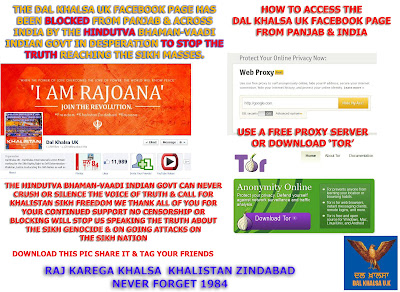 URGENT NEWS DAL KHALSA UK PAGE HAS BEEN BLOCKED IN PANJAB BY THE BHAMANVAADI HINDUTVA GOVT THIS SHOWS THE TRUE FACE OF BHAMANVAAD HIDING THE TRUTH PLEASE INFORM PPL ON PANJAB ABOUT THIS THEY CAN ACCESS THIS PAGE VIA A PROXY SERVER THANK YOU TO YOU ALL FOR HELPING US SPREAD THE TRUTH ONLY WITH YOUR SUPPORT WE HAVE DONE THIS AND WILL CONTINUE TO DO SO A MSG TO THE AGENTS WATCHING US YOUR CENSORSHIP WILL NOT SILENCE THE TRUTH NOR WILL IT SILENCE US !!!!!!! RAJ KAREGA KHALSA KHALISTAN ZINDABAD NEVERFORGET1984 _ DAL KHALSA UK SEVADAARS

Dal Khalsa UK Condemns Parkash Badal for yet again hurting Sikh sentiments to please the Hindutva Elite to which he is a slave.

Political observers have remarked that “Badal has stunned even the senior SAD leaders with the appointment of BJP state general secretary Kamal Sharma as his political advisor. He replaced Cheema who is now MLA from Ropar assembly constituency. Once seen as right arm of Chief Minister, Cheema is now a non-entity in the CMO like his former colleague Harcharan Bains”.

The appointment of Kamal Sharma on pivotel post may spark a debate both in SAD and BJP. Even the Sant Samaj, a politico-religious ally of Badal Dal may also feel disconfirtable with this appointment.

AH DEKHO HINDUTVADI INDIAN PROPAGANDA AFTER THE SIKH GENOCIDE OPERATION BLUESTAR.FULL OF LIES THEY NEVER SHOW SRI AKAL TAKHT SAHIB & ARE ALL ACTING IN THIS DRAMA SHOWING THEIR OWN WEAPONS CLAIMING THAT THE SIKHS HAD THOSE THEY BLAME CHINA & PAKISTAN - BESHARAM HINDUTVA FAUJ!

LOL THIS IS HILARIOUS,BUT SHOWS THE REALITY OF SOME OF TODAYS YOUTH WHO ARE TOO STUCK IN TO THEIR JATHEBANDIA AND OWN MARYADAS WHILE FORGETTING THE WIDER PANTH - SIKH NATION

THE FACELESS WAR - RAJOANA TV BY BHAI SARBJIT SINGH FILMED AT SRI GURU SINGH SABHA SOUTHALL ON SUNDAY 24TH JUNE 2012 EXPOSING THE HINDUTVA ATTACKS ON THE SIKH NATION AND PANJAB A MUST WATCH & SHARE VIDEO - YOU ALL NEED TO WATCH AND LEARN!!!!!!!!!!!!!!!!!!!!!!!