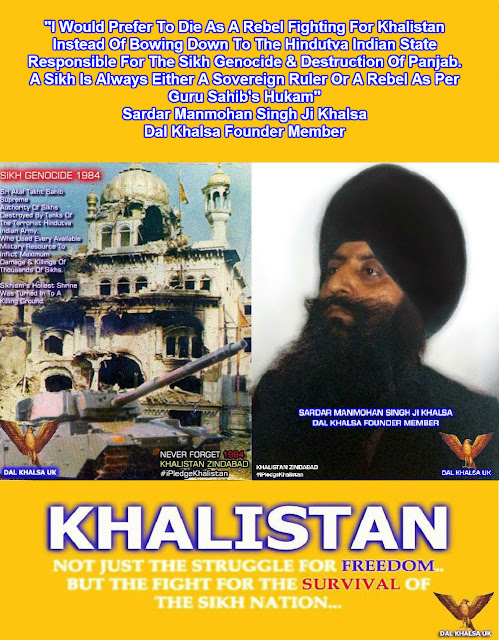 Hindutva Terrorist Says We Will Repeat The 1984 Sikh Genocide

'Lalkaar Rally' (Challenge Rally) By Hindutva Terror outfits
The Rashtriya Swayamsevak Sangh (RSS) has ordered its various facist outfits to hold a Lalkaar or Challenge rally towards Sri Akal Takht Sahib in Panjab.
This Lalkaar Rally is pitched to start from Patiala the HQ of the so called Hindu Takht who for many years now has been making threats to Sikhs openly on social media.
On the 25th a rally lead by these Hindutva Terrorists will start from Patiala to Sri Akal Takht Sahib,they are demanding a memorial be made for the so called 'martyrs' who were responsible for the 1984 Sikh Genocide.This is a direct challenge to the Sikh Nation and an attempt to show them that they can challenge us even at our supreme authority Sri Akal Takht Sahib where thousands of Sikh laid down their lives and became Shaheed defending the Sri Harmandar Sahib Complex.
Many Sikh Groups have prepared to oppose these people and we urge all to be fully armed and prepared as these people through the proxies of the Police will attempt to injure and even kill Sikhs such as in 2012 - killing of Shaheed Bhai Jaspal Singh Ji.
We should not take their threats lightly on any level as these people will not make any move without the intelligence agencies' go ahead or that of the Hindutva State.This is a critical time for Panjab's Sikhs and we should do all we can to inform our family friends about their actions,day by day the threat gets bigger and bigger while we as a community seem to underestiamte the very ideology they are following of Hindutva ie: Hindi,Hindu,Hindustan and no other.