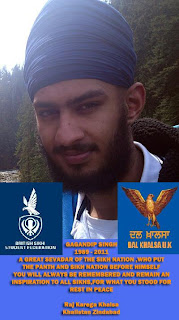 It Is With Great Sadness & Shock We Announce The Passing Away Of Gagndip Singh Founder Member Of BSSF - British Sikh Student Federation & CEO Of Sikh TV.A Body Which Has Now Been Identified Was Found In A Burning Car At 2am On Saturday Morning.
We Pay Tribute To This Great Sevadaar Of The Sikh Nation Who We Worked Closely With,All Sevadaars/Sangat Are In Shock & Disbelief. 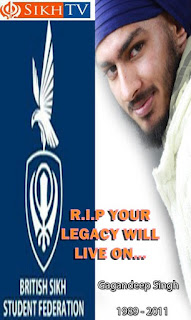 Gagandip Singh 1989 - 2011 You Or Your Seva To The Sikh Nation Will Never Be Forgotten ,We All Miss You & You Will Forever Remain An Inspiration Guru Sahib Kirpa Karn JUSTICE Is Served For What Has Happened.You Will Live On In Our Hearts & Like Thousands Before You Your Goal Of Awakening The Sikh Nation WILL Be Met & Khalistan Will Be Established Your Seva Will NOT Go To Waste

It is with deep sorrow and grief we announce the death of Gagandip Singh President of BSSF & CEO Sikh TV.Gagandip was murdered on the 26th of February 2011,his body was discovered in the boot of a burning Mercedes after the fire brigade put out the blaze.Patrolling officers found the car, a Mercedes C-class with the number plate V362 SCL, on fire in Angerstein Lane, Blackheath near Greenwich Park.

Police believe Gagandip was attacked in Brighton, by a number of attackers after which he was put in to the boot of the Mercedes he was driving he was had severe head injuries and was alive at the time, and driven 70 miles to Angerstein Lane where the car was set on fire.

Three individuals have been charged with the Murder of Gagandip Singh at this stage namely:

Harninder Shokar 19, of Charlton Park Lane,Mundill Mahil 19, of Maidstone Road Brighton also from Chatam Kent & Darren Peters of Shooters Hill Road Blackheath.All have been remanded and will appear at the Old Baily to enter a plea.

The murder of Gagandip has shocked the Sikh Community up and down the country and the Sikh Nation has suffered a huge loss with Gagandip being taken away from us.We remember his selfless service and hard work which we all have to unite and build upon.Be it the creation of BSSF,Dharam Parchaar in the form of leaflets,cds & books,Helping the families of Shaheeds in Panjab,Promoting the cause of Self Determination of the Sikh Nation in the form of Khalistan,Speaking up for Sikh Human Rights as well as those of others,sending 100,000 posters of Shaheed Sant Jarnail Singh Ji Khalsa Bhindranwale to Panjab at a time when challenges were being put to the Sikhs,Sikhi Camps up and down the UK,Working with other Sikh groups at sports events such as the Sikh Youth Football tournament 2010,Kirtan Darbars in Gurdwareh all year round, Travelling to Pakistan to make a documentary on the historical Gurdwareh,to one of his biggest achievements the launch of The Sikh TV on the Sky Digital Platform in late 2010,where he would go and run the channel during the night to make sure the message of the Gurus,Gurbani and Sikhi Parchaar went out to the masses.

Gagandip funded all his activities and those which served the Sikh Panth from his own pocket and would go out of his way to help his friends and those in need at whatever time of the day.He reached out to all parts of the community and tried to unite everyone under the Kesri Nishan Sahib to strengthen the community while educating it at the same time so we have a new generation of leaders who can lead the Panth in the right direction.He was a true Panthic Leader and rising star who never harmed nobody and never even spoke in a raised voice, he never deserved to die and be taken away from us in such a shocking and evil way.

Recent news reports confirm Gagandip was breathing at the time the car was set alight, there are also reports that the murderers were caught on CCTV buying petrol to use for their evil and horrific act.We demand that the killers are locked up for life for what they have done and their can be no forgiveness in our eyes for the the evil pre meditated murder they carried out,let their be no mistake we fully believe this was no accident and that the aim was to kill Gagan and finish him off.

We pray to Akaal Purakh Waheguru that Gagandip is now in their Charan and may Guru Sahib keep Gagandips family & friends in Chardi Kalla and help them at this hard & painful time at which none of us can comprehend the magnitude of what has happened – we are all in deep sorrow, sadness & in shock – Gagandip can never be replaced ,but his legacy will live on……. and we will build on his work and make him proud.

We are appealing for anyone
to come forward with information
any witnesses please call the incident room on
020 8721 4805
or call Crimestoppers anonyously on 0800 555111
or call us at Sikh Tv on 0121 7611313
or email us on info@thesikhtv.com,bssf@live.com,info@britishsikhstudentfederation.com